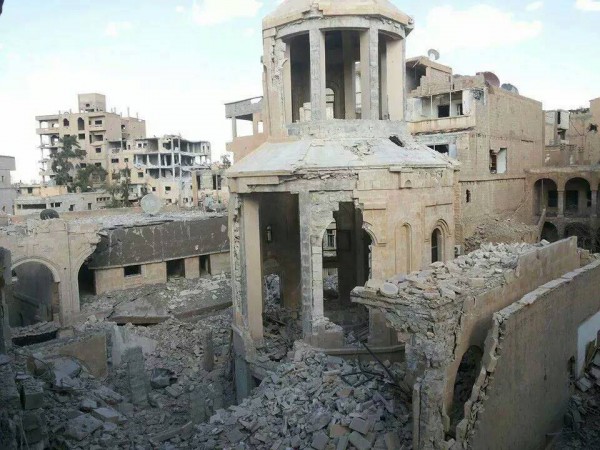 On 10th January, 2019 the Chairman of the Syrian-Armenian Community in Armenia, George Barseghyan gave an interview to ArmenPress about the meeting with the Syrian President Bashar Al-Assad and high-ranking officials of the current Syrian regime where a group of Armenian business people also participated[1]. He indicated that the task of this delegation was a contribution to boosting Syrian-Armenian relations and show their support to President Assad.

By praising Syrian president due to his rapid acceptance of their request of the meeting, Barseghyan referred to profound historical relations between two nations. He also mentioned that Armenian governments continued their relations with Syrian government, not regarding the fact that majority in the international community turned their heads off Assad regime[2].

The Chairman of the Syrian-Armenian Community in Armenia argued that due to these facts, Syrian regime is planning to give priority to Armenians in business activities and restoration works. Furthermore, Barseghyan expressed his contentment of getting a promise from President Assad particularly about the restoration of the “Armenian Genocide Memorial Church” in Deir Ezzor destroyed by Jabhat Al-Nusra terrorists[3].

Chairman’s happiness triggered by Assad’s promise of the restoration of the church in Deir Ezzor bears a distorted historical past. This region was a major destination of Armenians relocated and resettled during the First World War. For decades Armenian “tragedies” were related to Deir Ezzor. While claiming to be exiled to live in the desert, “for leaving to death”, Armenians formulated a narrative that kept itself cocooned to any challenge. By being blind and deaf to the facts that historians put down, some Armenians did not even hesitate to compare Deir Ezzor with Auschwitz. Certainly, these claims were disproved once again by the current events ongoing in Syria through which the world public has a much better knowledge of the Syrian landscape. The shores of Euphrates River, one of the most fertile lands of Mesopotamia, where Deir Ezzor is located, viewed by the local and international actors involved in the Syrian War discloses how distorted is the historical narrative promoted by Armenians for decades.

The Armenian-born lawmaker of the Syrian parliament Zhirayr Reisian also in his interview to ArmenPress indicated that the Armenian community of Syria is going to continue its work on the restoration of the national structures in 2019[4].

He informed that the restoration processes have commenced since the liberation of Aleppo in 2018. According to Reisian the Armenian National Sanctuary of Aleppo, the buildings of the Karen Jeppe College, as well as two Armenian churches and the Cilician College of Aleppo[5] have already been restored last year. Reisian mentioned in his interview that the restorations were underway not only in the Armenian structures, but also in other monuments too. The controversial part of his statement was related to Turkish presence in Syria, where he blamed Turkey for “invasion” and being responsible of “human losses and looting”.

The destruction of the monuments by the terrorist groups in Syria have and should be condemned by all the actors in the international society. Historical heritage of the ancient civilizations and small nations living in Syria should be protected from barbarism of the terrorists aiming to erase not only human lives, but also human traces from the surface of the Earth. Therefore, the statements of the Chairman of the Syrian-Armenian Community in Armenia and the Armenian-born lawmaker of the Syrian parliament about the restoration of the Armenian monuments in Syria are understandable and should be supported.

As regards Reisian’s allegations about Turkish presence in Syria considering that Turkey is a host country for 3.5 million Syrians including Syrian Armenians since the outbreak of the crisis, and contributor to reconstruction of the country after the defeat of ISIS in various parts of the country, these claims may be evaluated as a deliberate attempt to inflict Turkish position. Not surprisingly, such kind of appeals seemed to convey some analogies with the recent allegations of some Tashnak Armenians where Syrian Armenians called to support Kurdish militants of YPG/PYD terrorist group against Turkey’s military operations in Syria[6].

The reference of Barseghyan to the “Armenian Genocide Memorial Church” in Deir Ezzor and Reisian’s allegations on Turkey’s presence in Syria show how some Armenian officials prefer to look at the general picture of the situation from the angles of  hatred to Turks solely. By utilizing this hostile narrative no matter what the topic is, these Armenian officials simply put their earnestness about the anxiety of historical and cultural heritage and the future of Syria under the question. The obsession with Turks and chimerical claims about them simply weaken the stance of Armenians in all platforms they take part in. Undoubtedly, Armenian narrative may only be reliable if it may see and evaluate the situation with a sober mind and evade from fueling itself with the enmity to Turks.