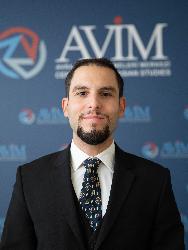 Ahmet Can Öktem completed his undergraduate studies at Eskişehir Osmangazi University, in the Department of Economics at the Faculty of Economics and Administrative Sciences, graduating in 2013. He was accepted to the Masters degree programme at the Middle Eastern Technical University's Faculty of Social Sciences European Integration field in 2014. He finalized his studies in 2018. He finished the diploma programme of CIFE, Centre International de Formation Européenne, in Advanced European Studies and International Relations in 2018, which he joined in 2016. He worked as an intern at the Ministry of EU Affairs between September - December 2013 .

Öktem has been working at AVIM as a translator since October 2017.