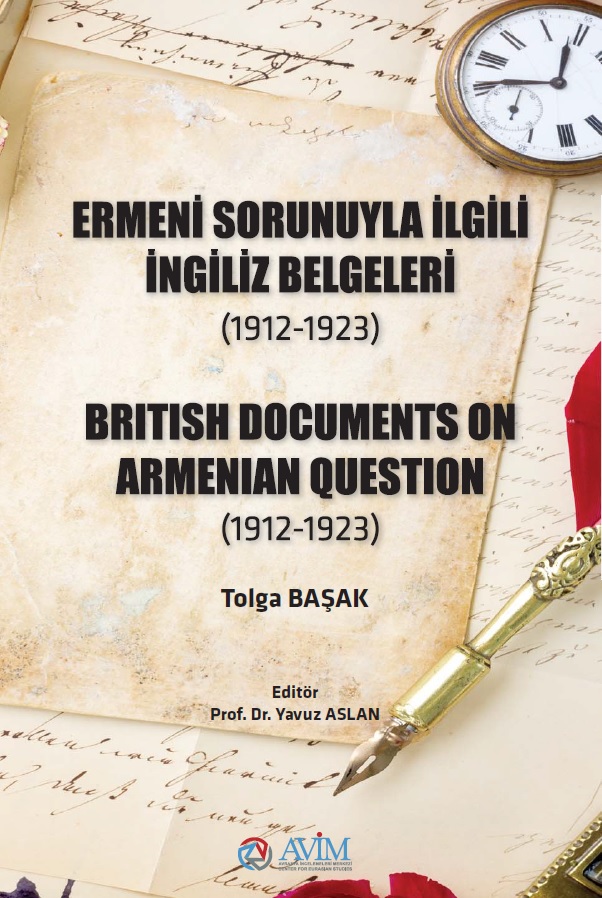 AVIM published the book, containing a selection of documents, entitled “British Documents on Armenian Question (1912-1923)” compiled by Associate Professor Tolga Başak. Tolga Başak’s study contains numerous documents from the National Archives of the United Kingdom, Public Records Office, the Parliamentary Archives, House of Lords Records Office and Oriental and India Office Collection at the British Library as well as from the private papers of the well-known British Statesmen such as David Lloyd George and Bonar Law and makes an important contribution to historians, political scientists and scholars in other fields interested in the Armenian Question.  Tolga Başak’s study contains 367 documents covering the period 12 December 1912—16 June 1923. The author also provides a lengthy introduction chapter to let the readers better grasp the contents of the documents as well as period in which they were written.

Previously Bilal Şimşir published a 4-volume collection of British Documents on the Ottoman Armenians covering 1856-1895 period. Dr Başak’s study can be seen in many ways as a complementary and follow-up study to Bilal Şimşir’s seminal work. The documents discovered by Tolga Başak throws important light onto the role played by Great Britain and other great powers in the emergence and exacerbation of the Armenian Question. In addition Başak’s provides important information on the manner in which the Armenian Question has been used by British Propaganda Office during the war by providing samples from the correspondence of Arnold J. Toynbee among others.