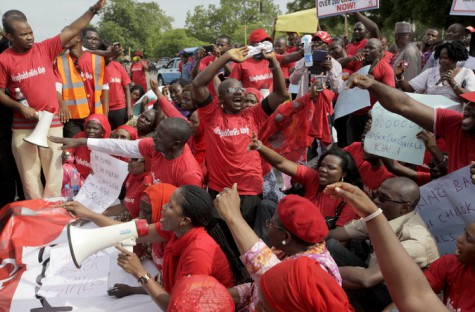 A second kidnapping of schoolgirls in Nigeria’s northeast by Islamist militants put new pressure on the country’s troubled government, which had been hoping to showcase its emergence as Africa’s largest economy this week but instead has been forced to confront its failure to contain a growing insurgency in its north.

Men suspected of being fighters from the radical group Boko Haram kidnapped 11 more girls in Nigeria’s northeast, local officials said Tuesday, an intensification of its campaign against female education and the Nigerian government since the abduction of hundreds of schoolgirls three weeks ago.


The spectacle of red-shirted protesters in the streets of the capital here, angry at the government for its tepid response to the crisis, put President Goodluck Jonathan under an uncomfortable spotlight as executives from across the world arrived in private jets to attend the Africa meeting of the World Economic Forum, the continent’s answer to Davos.

The authorities here — and particularly the military, itself implicated in numerous massacres of civilians — appear to be floundering in their response to a crisis that social media have transformed into a cause célèbre. The new kidnappings underlined the inability of the Nigerian government to protect civilians from the growing insurgency. Not a single girl has been rescued so far.


In a sign of deepening global concern, on Tuesday the United States offered to provide a team of experts, including military and law enforcement officers, along with hostage negotiators and psychologists, to assist the Nigerians in recovering the girls, an offer that the government here accepted. American officials said “military resources” would not be included, but President Obama weighed in, vowing to “do everything we can.”

A viral social media campaign, using the hashtag #BringBackOurGirls, has brought new infamy to Boko Haram, which has been operating in Nigeria for more than a decade. The group’s goal, never clearly enunciated, is to radically undermine the secular Nigerian state.


But never in a five-year campaign of bombings, civilian massacres and assaults on state schools have the attacks so shaken the government. The heightening concerns have led to daily antigovernment protests, which continued Tuesday with a demonstration outside defense headquarters here. In a sign of the government’s nervousness, several of the protest leaders were briefly arrested Monday.

In the latest kidnappings, more girls were taken from their homes late Sunday in the villages of Warabe and Wala, said Hamba Tada, an official in the area. Heavily armed militants descended from surrounding hills, stealing grain and livestock belonging to villagers, forcing the girls, ages 12 to 15, into an 18-seater bus, and warning locals not to alert the authorities.


Another local official confirmed the new abductions, though the area’s top police official, Lawan Tanko denied they had taken place. “By our record it’s not true,” he said in an interview from Maiduguri, the capital of Borno State.

In Abuja, limousines ferrying business-suited delegates to the World Economic Forum are flooding the capital and filling its luxury hotels, but public discussion and newspaper headlines here are dominated by little else but the kidnappings. On Monday, a video surfaced in which the Boko Haram leader, Abubakar Shekau, claimed responsibility for the abduction of the nearly 300 girls taken on April 15 and threatened to sell them into slavery in a rambling and vituperative diatribe.


The video has sharpened the sense of urgency about finding the girls quickly, and has added to the deepening embarrassment of the Nigerian government, even as it tries to present a progressive new face at the forum.

Unicef has reported that the second kidnappings involved at least eight girls who were seized in their homes in Borno to prevent them from attending school. It called the latest abduction “an outrage and a worsening nightmare for the girls themselves, and for the families of the more than 200 girls who have been stolen from their communities in the last several weeks.”


Manuel Fontaine, Unicef’s regional director for West and Central Africa, said in a telephone interview that the information had been obtained from the agency’s contacts for the area, which has been rived for years by attacks from Boko Haram.

In the past, Boko Haram has frequently targeted schools, which it sees as symbols of the secular government’s overreach. Male students have been slaughtered, while the female students have been let go after admonitions to return to their families, abandon their studies and get married. The latest kidnappings appear to represent a hardening of the militants’ line, though not a wholesale departure from it.


Pogu Bitrus, a local official in the town where the schoolgirls were taken, Chibok, said: “This has been going on. It’s been a common practice. They come and attack a place and seize girls. They just have been doing this.”

The military, which has responded brutally to Boko Haram’s campaign, itself engaging in large-scale atrocities against civilians, has so far proved incapable of finding any of the kidnapped girls, some of whom may already have been taken across the border to Cameroon, in a remote, hilly and wild corner of West Africa. The number of missing schoolgirls has been revised by officials more than once, while some escaped shortly after the abduction.


It is unusual for the military establishment here, usually fiercely protective of its sovereignty, to accept offers of outside help as it has apparently done in this case.

The latest kidnappings, not yet acknowledged by the government, differed somewhat from the wholesale abduction three weeks ago of girls from the school where they were taking their exams. Then, the militants disguised themselves as soldiers.


In this case they simply came down from the hills, brandishing their guns in the darkness.

They descended “with several AK-47 rifles hanging over their shoulders,” said Mr. Tada, the local official.


“They evacuated some of our grains, and carried away livestock into a pickup van. The girls were hurled into an 18-seater bus before they fled,” he added.