THE PRESIDENT OF ARMENIA MR. SARGSYAN’S ADDRESS TO THE UNITED NATIONS GENERAL ASSEMBLY AND HIS LATEST STATEMENTS
Commentary No : 2014 / 77
Hande Apakan
01.10.2014
3 min read 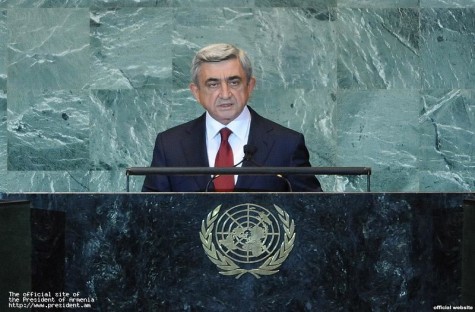 In his address to the United Nations General Assembly,[i] President of Armenia Mr. Serzh Sargsyan has indicated that the Turkish-Armenian Protocols signed in 2009 might be recalled by the Armenian government.

In a similarly worded article[ii] published in International New York Times on the same day, Sargsyan stated that the protocols have been kept waiting for parliamentary approval for some years now, as the Turkish government has placed the return of Nagorno-Karabakh to Azerbaijan as a precondition for approval of the protocols. During his address to the General Assembly, Sargsyan relayed the Armenian people’s expression “To hell with your ratification” and expressed that the Armenian government is seriously considering recalling the protocols from the Armenian Parliament.

Following Sargsyan’s address to the General Assembly, during the press briefing for the Administrator of the United Nations Development Programme Helen Clark’s visit to Yerevan, the Minister of Foreign Affairs of Armenia Edward Nalbandian was asked when the Protocols would be recalled from the Armenian parliament. Mr. Nalbandian’s response was; “If there was such a decision, the President of the Republic would probably say about it. But the President said what he said, and as of now I have nothing to add.”[iii]

Sargsyan’s address to the General Assembly is significant for two reasons. Firstly, it is significant with regard to the expression “To hell with your ratification” that he relayed and implicitly approved. It is inappropriate for a statesman to make an address in the United Nations in such a language, since it is contrary to the spirit of diplomatic courtesy that is exhibited in the UN. In this way, Sargsyan has added a new example for the inappropriate remarks previously made by certain heads of states that have been castigated by civilized circles.

Secondly, the statements made by Sargsyan indicate that Armenia is stubbornly against any dialogue and that it is consciously obstructing the efforts for reconciliation. It appears that the aim of the statements is not to signal the recalling of the Protocols, but to send a signal to Armenia and the Armenian Diaspora to the effect that, until the end of 2015, the Armenians will concentrate all their resources and energy into carrying out propaganda against Turkey. This, in turn, means that the path of carrying out a dialogue with Turkey, in the near future, is being completely blocked off.

Therefore, unfortunately, this comes to mean that a new opportunity in the Turkish-Armenian reconciliation efforts has been lost and that an escalation of tension is being charted by Armenians. However, based on past experience, these kinds of initiatives are bound to remain as political statements without any effective validity. Armenia and the Armenian Diaspora will be frustrated as the bar is being set too high, which raises their irrational expectations. The first sign of this could well be the decision to be taken by the European Court of Human Rights Grand Chamber regarding the Perinçek v. Switzerland case.