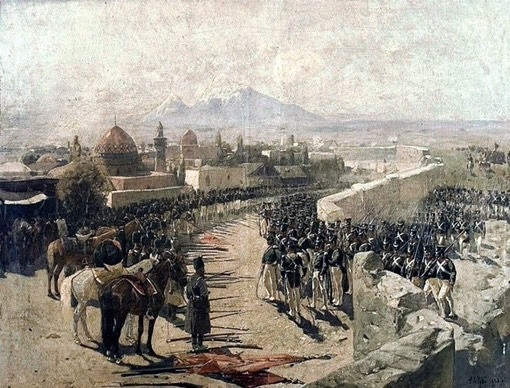 With a population of more than a million, today the capital city of Yerevan is the political, financial, industrial, and cultural center of Armenia. However, at the beginning of the 19th century, it was a Turkish-Azerbaijani rather than an Armenian city, notwithstanding the erroneous assertions by the Armenian political leaders and other spokespersons concerning the city’s past.

In 11th century, the city was briefly controlled by the Byzantine until the Seljuk Turks took the city in 1064 and ruled the entire area. This was followed by the Mongol-Ilkhanid conquest of the region in 1236, which ended at the end of 13th century when Turks re-conquered the region.

The region’s subsequent history involved frequent changes of control over the region between the Iranian and Ottoman Empires. Indeed, upon capturing the citadel town in the 17th century, Ottoman Sultan Murat IV had built the famous “Revan Mansion” (Revan Köşkü) in memory of the conquest. In the 18th century, the Turkish Qajar Dynasty established Khanate of Erivan. The Erivan Khanate ruled the area until it was conquered by the Russians in 1828, following the signing of the Turkmenchay Treaty in 1828.

At the time of the Russian conquest in 1820s, Azerbaijani Turks made up around 80 percent of Yerevan’s total population. During the occupation, 359 Azerbaijani villages were razed to the ground and their population was massacred and expelled from their houses. The Russians settled 45,000 Armenians brought from today’s Turkey and Iran lands until 1832. However, even with these massive population movements, the Armenians still did not make up a clear majority in the region. It was only at the end of the 19th century and early 20th century, following war and continuous migration and emigration that the Armenians established a solid majority in the region.

The famous painting by Franz Roubaud of the Yerevan Fortress siege in 1827 by the Russian forces under leadership of Ivan Paskevich is an interesting display of the city’s Azerbaijani Turkish past. Painted with the Ağrı Mountain at the background, Roubaud’s painting clearly demonstrates the Azerbaijani-Muslim character of the city with mosques and minarets.  Today, there are no mosques or Azerbaijani Turks left in Yerevan, a city where they once constituted around 80 percent of the population. Successive generations of Armenian politicians not only failed to admit the fact that the Armenian dominance over the region was established through massacres and ethnic cleansing, but also persistently denied its Azerbaijani-Turkish past.

It is high time that the government in Yerevan faces its history rather than launching campaigns of hatred against their neighbors by false accusations and making baseless and provocative territorial demands on them.