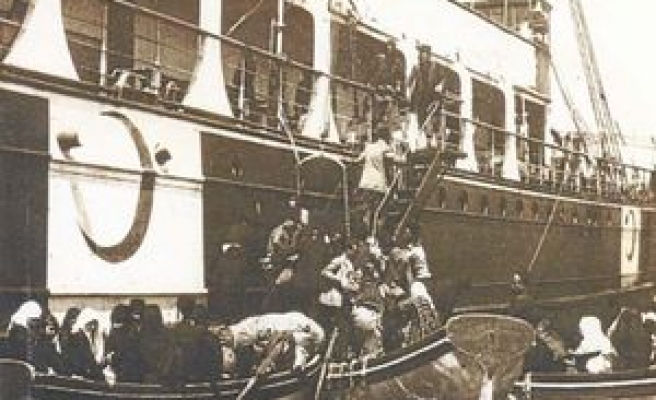 The February issue of the book supplement of the Agos Newspaper includes İsmail Beşikçi's review of Ali Rıza Çelik and Rıza Duran’s book titled “ABEŞ (Şerefiye) Bölgesi: Tarih, Kültür, Etnisite - Boşnaklar, Ermeniler, Kürdler, Pontos-Rumlar, Türkler” (“ABEŞ (Şerefiye) Region: History, Culture, Ethnicity - Bosniaks, Armenians, Kurds, Pontos-Greeks, Turks”).[1]  In his review, Beşikçi mentions that mostly Pontus-Greeks and in addition, Armenians had lived in some villages in the central Black Sea Region of what is now Turkey. On the other hand, he claims that the Committee of Union and Progress aimed to steer the population movements in line with a "state project based on the Turkish nation" by sending the Greek-Pontus population in the region to the Aegean islands and Greece.

However, it is known that most of the population exchange that Beşikçi mentions in his review took place after the signing of the population exchange agreement between Greece and Turkey. The exchange between Turkey and Greece took place in accordance with the “Convention Concerning the Exchange of Greek and Turkish Populations" signed on 30 January 1923. In accordance with the Convention, mandatory exchange of the Orthodox Greeks in Turkey and Muslims in Greece took place. Since exchange was carried out on the basis of religion, it also covered the Orthodox Christian Turkish population of Karaman/Turkey.

This exchange did not emerge as a Turkish project. Correspondence in the archives show that it was the Greek Prime Minister of the time, Eleftherios Venizelos, who proposed the population exchange. Venizelos, in his letter to the High Commissioner for Refugees of the League of Nations, Fridtjof Nansen, offered a compulsory exchange of the Greek and Turkish populations and asked Nansen for help with arrangements in this regard.[2] Concerning the population exchange, Venizelos’ objective was to send the Turks living in Greece to Turkey to make room for the Greeks who would migrate to Greece, since it was feared that the departure of the Greek Army from Anatolia in defeat would lead to retaliation due to what the army had perpetrated in the past.[3] Regarding the subject, the historian İlber Ortaylı states that Venizelos turned from extreme romanticism to extreme realism as a result of the failure of the “Megali Idea” he had nurtured. According to Ortaylı, Venizelos had to ensure the Hellenism of Greece, Thrace, as well as the Greek islands left outside the Italian occupation in accordance with [the Treaty of] Lausanne.[4] It is also seen that the transfer of the Greek population to Greek Macedonia and Thessaloniki caused other ethnic groups (Sephardic Jews, Albanians, Slavic-speaking Macedonians) to shrink in proportion, and led to the Hellenization of the region.[5] Therefore, population exchange was a matter of preference for the Greek authorities.

In the opinion of the Center for Eurasian Studies (AVİM); a major reason behind the support of Greece and of the leading Western powers at the time for the compulsory exchange (which is open to being qualified as ethnic cleansing in today's understanding), was to preclude any future expansion of the Republic of Turkey -whose boundaries were determined in Lausanne- towards the West.

There have been other examples and attempts of population exchange in the past. For example, a voluntary exchange of minorities was implemented between Bulgaria and Greece in 1919, and a population exchange was brought up between Greece and the Ottoman Empire before the First World War, although this attempt was interrupted when the war broke out.

In accordance with the 1923 Convention, those exchanged lost their previous citizenship and gained the citizenship of the country in which they would be resettled. The convention exempted the Greeks living in Istanbul and the Muslims in Western Thrace. Those exchanged were allowed to carry with them all of their movable property, and a mixed commission composed of four Turks, four Greeks, and three representatives of the League of Nations appraised and liquidated the immovable properties. The commission determined whether the total amount was balanced for both countries and arranged for transfer of capital. It took more than a decade for the mixed commission to complete its work and its many meetings are documented in detail in the archives of the League of Nations.[6]

In this respect, alleging that the internationally executed population exchange (for which records were kept and the regulations were made by an international commission) is solely a Turkish initiative or claiming that Turks aimed at expropriating the immovable property does not reflect the truth.

[2] Sarah Shields, “Forced Migration as Nation-Building: The League of Nations, Minority Protection, and the Greek-Turkish Population Exchange,” Journal of the History of International Law, 18, 2016, p. 137.