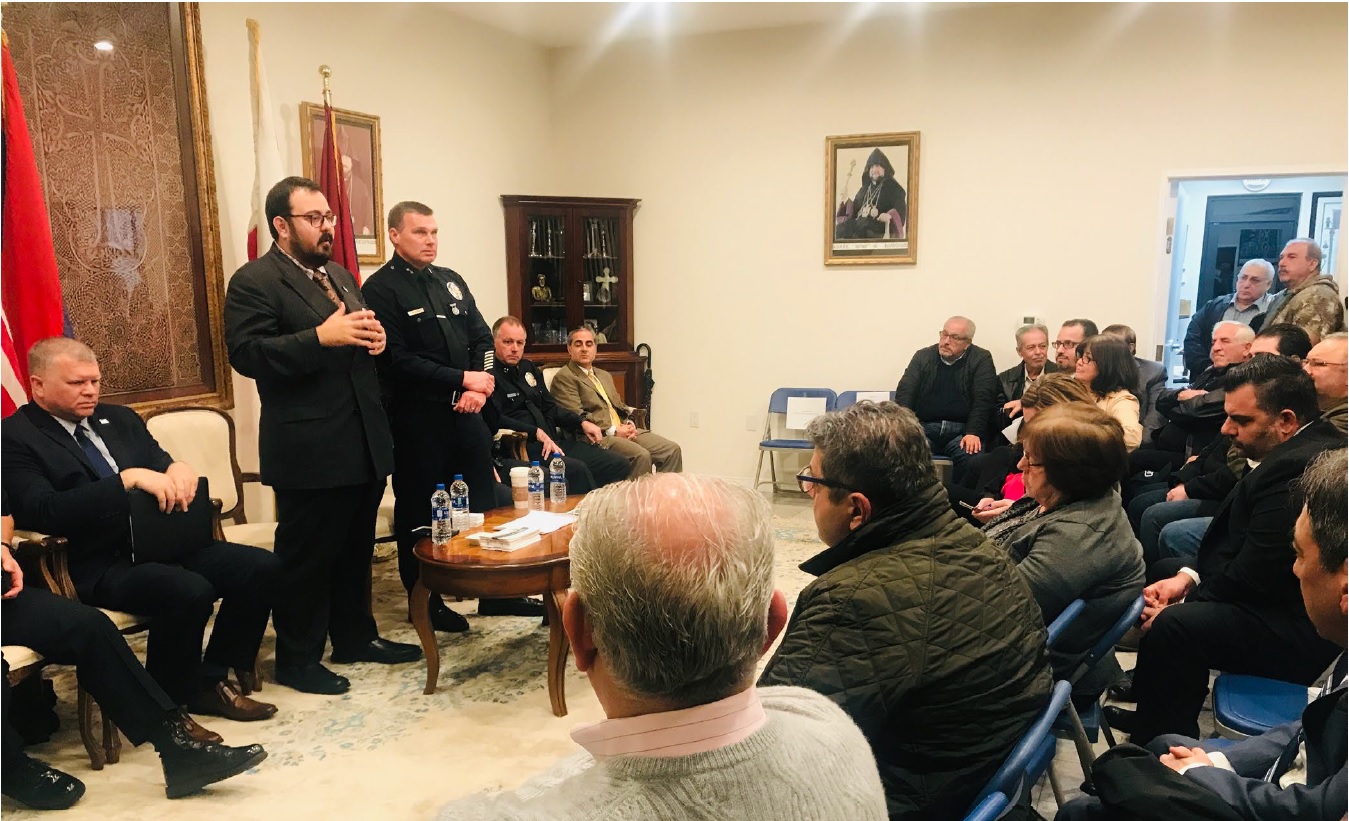 In AVİM commentary of 31 January 2019 entitled “Hate Speech Put Into Action Against Turkey and Turks: Foul-Smelling Provocation”[1] we referred to an exclusive report filled with hate and hostility against Turkey and the Turkish people published in Armenian-American bilingual daily newspaper Asbarez regarding an incident at two Armenian schools in Los Angeles. It was claimed in Asbarez report that “officials of Ferrahian and Manoogian-Demirdjian schools arrived at the school premises early Tuesday morning to find the buildings covered with Turkish flags.”

It was stated in the above-mentioned Asbarez report that Los Angeles City Council member Paul Koretz described the incident in the Armenian schools as; “It is the equivalent of putting a Nazi swastika on the side of a Jewish school.” We understand from the biography of Paul Koretz that his father evaded Nazi Germany's persecution of Jews in 1939 and fled to America. Most probably he made this very unfortunate and hurtful comment because of his family’s tragic experience in the past. Nevertheless his comment regarding the Turkish flag is totally unacceptable and reflects an insult against the symbol of Turkish nation. Therefore we, in our last AVİM commentary on the subject stated that “equating the Turkish flag with the symbol of the Nazi regime is an act of ignorance, discrimination, and defamation. Koretz should be ashamed of himself for likening the Turkish flag, a symbol of a nation, to that of the monstrous and murderous Nazi regime.” In fact he owes an apology to Turks and Turkey for this inappropriate metaphor.

We see that instead of apologizing, Paul Koretz and his collaborators continue with the smear campaign and pronouncing hate speech against Turks and Turkey. According to a statement issued by his Office on 6 February 2019 with the title “The Office of Councilmember Koretz Hosts Joint Safety/ Security Forum with Armenian Institutions and Law Enforcement After Last Week’s Hate Crimes Against The Armenian Community”, the said Office hosted a “ forum on Monday with Los Angeles Police Department Operations Valley Bureau and leadership from Armenian American Institutions to address incidents that occurred last Wednesday night when Turkish flags were hung at two Armenian American schools in the San Fernando Valley under the cover of darkness”. The statement also stresses that “The incidents, that include trespassing, are both being investigated by the Los Angeles Police Department as possible hate crimes.” [2]

As it can be easily noticed there is a clear contradiction between the title of the statement and the sentence concerning the investigation of the Los Angeles Police Department (LAPD). We understand from the above mentioned sentence that LAPD considers this incident “as possible hate crime”. However, there is no judgement that this incident is a “hate crime”. Since neither the perpetrators nor the intention is known, this incident might be considered only a “possible hate incidence”. It might be a provocative act by some professional “revolutionary” agitators. In spite of this fact, Armenian nationalists seem to portray this incidence as a “hate crime” against Armenians by Turks.

We understand from the statement published by the Office of Paul Koretz that the “meeting was moderated by Councilmember Koretz’s Director of Public Safety Gregory Martayan”. A short web scan indicates that Gregory Martayan is a militant Armenian activist. Most probably, it is quite normal for him to describe each and every incident against Armenians as “hate crime.”

LAPD’s “hate crime” definition does not fit to this obsessive understanding. LAPD in their web page describes the “hate crime” as follows:

“A hate crime is any criminal act or attempted criminal act directed against a person or persons based on the victim’s actual or perceived race, nationality, religion, sexual orientation, disability or gender.

Examples of hate crimes include:

Acts which result in injury, even if the injury is slight.

Threats of violence that looks like they can be carried out.

Acts which result in property damage.

Any criminal act or attempted criminal act, including property damage, directed against public or private agencies.”

In the light of the above description of “hate crime” by the LAPD, could it be possible to consider the incident in the Armenian schools as a “hate crime”? Simple answer of this question is negative. It seems that racist Armenian Nationalists, including employees of his office, are using Paul Koretz as a means for propagating this incident as “hate crime” and through this claim are trying to direct accusations against Turks and Turkey.

Coming from a family evaded Nazi Germany's prosecution of Jews in 1939, Paul Koretz should know that “between 1941 and 1944, a group of Turkish diplomats helped hundreds, perhaps even thousands, of European Jews escape near certain death at the hands of the Nazis. It is one of the lesser-known stories of Holocaust rescue. But 70 years after the fact, details of this extraordinary saga are beginning to emerge with the release of the new documentary film, ‘The Turkish Passport’."[3] This is a quoted passage from a longest running newspaper currently in print in Israel. It should also be mentioned that many Spanish and Portuguese Jews expelled from Spain were welcomed into the then Ottoman Empire. They became an asset for Turkish society. In 1933, Mustafa Kemal Atatürk invited to Turkey German university professors who were under the threat of Nazi persecution while most of the world turned their back on the Jews and condemned them to the horrors of the Nazi genocide. After so many years it is only pity that a child of a Nazi persecuted family likens the symbol of the Turkish nation, Turkish flag, to the symbol of the monstrous, murderous and genocidal Nazi regime for collecting votes from his constituency.

The smear campaign and pronounced hate speech against Turks and Turkey constitute harassment to the Turkish community in Los Angeles. This is a city that a number of Turkish diplomats were brutally murdered by the Armenian Diaspora-funded or supported Armenian terrorists.

Local authorities of Los Angeles especially city Council member Paul Koretz would be responsible for any verbal or physical attack that might be directed against Turkish-American Community in Los Angeles. Los Angeles city authorities should stop these provocations against Turks and Turkey and should not be a pawn in the hands of racist Armenian nationalists.