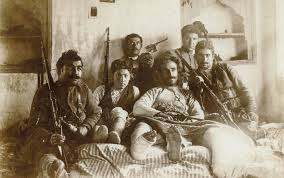 On 5 February, an article titled “Roving Revolutionaries: Armenians and the Connected Revolutions in the Russian, Iranian, and Ottoman Worlds” which has the same title with Houri Berberian’s book printed in April 2019, was published[1]. In accordance with the content of the book, a discourse is made regarding the activities of groups named Armenian revolutionaries, especially the Armenian Revolutionary Federation (ARF-Dashnaksutyun), in Russia, Iran and Ottoman Empire. In the article, it is seen that an attempt was made to legitimize many activities of the ARF under the narrative of “the role that cosmopolite Armenian revolutionaries had played to shape the 20th century.

At beginning of the article, it is mentioned that Stepan Zorian, one of the founders of the ARF, was an activist who played an active role in the declaration of the Constitutional Monarchy in the Persian Constitutional Revolution, the October Revolution in Tsarist Russia and the constitutional period in the Ottoman Empire. However, it does not seem correct to define the identity of Zorian, who was engaged in the anti-Ottoman movement[2] with separatist organizations in the Balkans in the environment created by the Constitutional Period, solely as an activist. Being aware of this, the author presents the ARF as a party comprising of radical activists in several points of the article. It is mentioned that these roving radicals accelerated communication between other Armenians living in Anatolia and the South Caucasus region (Kars, Ağrı, Yerevan, Tbilisi, Batumi and Gence) and that an advantage was obtained in developing national awareness[3]. Here, too, the emphasis on aspects such as the improvement of communication and acceleration of modernization instead of the ARF militants attempting to organize the people in Diyarbakır, Van and Bitlis against the Ottomans is an example of the author's effort to show the activities of the ARF as sympathetic.

The article mentions that the Russification policies implemented in Russia in the late 19th and early 20th centuries, and the inability to achieve the results expected from the Tanzimat regime in the Ottoman Empire, prompted the Armenian Revolutionaries to take action. It is stated that the Hunchak and Dashnak parties started riots in Anatolia during this period. It is even said that these Armenian activists had their own ammunition and that some of them were attempting to assassinate Sultan Abdulhamit.

As the Armenians are a society that has lived under many empires but does not have a homeland, it is seen that they aim to accentuate the revolts’ justifiability by placing emphasis on the Armenian activists’ effort to obtain this. This narrative almost signifies justifying the atrocities inflicted by the Hunchaks and Dashnaks in the Ottoman Empire and Azerbaijan.

However, especially the persecution carried out against the local people during the revolts in Anatolia and the Caucasus against Ottomans shows that the situation cannot be explained in such an innocent manner. As a matter of fact, in the article, the presence of phrases such as the Armenian activists having their own ammunition and mentioning of an assassination attempt against Abdulhamit show that these activists were more engaged in terrorist activities than revolutionary activities. The massacres carried out by the ARF militants who joined the armies of Tsarist Russia during their advancing together with the Russian army is also in contradiction with the image of the "revolutionary Armenian activist" drawn in the article.

In the conclusion of the article, the Armenian Revolutionaries are called the real children of the free homeland[4]. Therefore, all activities performed by the radical activists as described in the article serve the purpose of legitimizing and heroizing terrorist activities.

This article inevitably shows the conditions under which the Ottoman State decided to implement the Relocation and Resettlement in 1915. Many people who refer to the Armenian Genocide narrative are trying to compare the experience of the Jews in Nazi Germany with the Armenian experience. However, when Ottoman History and German history are examined, it can be understood from the above article's approach defending conflict and terrorism that these two events have nothing similar. As a simple example, there were no militant groups in Germany trying to disrupt the order of the society before the Second World War. However, the activities of the ARF, which are attempted to be white washed in this article, have caused wounds in the Armenian and Turkish society that are not closed even today.

At this point, we would like to draw attention to a point raised by Roland Lauder, President of the World Jewish Congress, in his main speech at the event held on the occasion of the 75th anniversary of liberation of Auschwitz. Lauder said in his speech that “When the survivors liberated from this Nazi nightmare, they never sought revenge. They lost their mothers, fathers, sisters and brothers, in too many cases they lost their wives, their children. And in spite of this, not one German was killed in retribution by a Jew, not one![5]”. Indeed, Jews have never attempted to take revenge on the Germans, despite the fact that they have been subjected to a systematic and dimensional genocide that has never been seen before. However, the ARF and the extreme and hateful Armenian groups with the mentality of the ARF have brutally murdered Turks who were not even alive in 1915 in the name of taking revenge, based on self-evident genocide allegations. Even more serious, the poisonous ideas of the ARF and the like are constantly being planted in the minds of the new generation of Armenians. As a result, this situation constantly constitutes a hindrance to the desired Turkish-Armenian reconciliation.