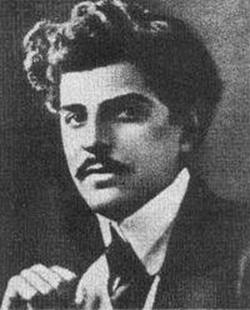 On the occasion of the anniversary of his birth, the newsletter “Crossroads,” which belongs to the Armenian Prelacy in New York, published a short piece on the death of Rupen Sevag Chilingirian, an Armenian physician and poet who lost his life in August 1915. Born in Istanbul on 28 February 1885, Chilingirian received his elementary education at the Askanazian school and then at the lyceum of Bardizag until 1901 and later attended the famous Berberian School in Üsküdar, Istanbul. The piece published on Chilingirian contains numerous factual errors and misrepresentations that present his death as part of a conspiracy.

According to the article published on “Crossroads”, he was “arrested on the fatidic night of April 24, 1915, and deported to Cangiri [Çankırı], in the region of Ankara, with many other intellectuals.” Subsequently on 26 August 1915, Chilingirian and his three Armenian friends “were dispatched to Ayaş, the other place where Armenian intellectuals had been exiled. Six hours into the route, in a place called Tuney, they were ambushed by a party of Turkish chettehs organized by the local secretary of the Ittihad Party and savagely murdered. Rupen Sevag was the last to be killed.”

First of all, Chilingirian was not arrested on the night of 24 April 1915. He was arrested much later on 22 June 1915. Second, the sancak of Çankırı was not in the Ankara region as the reader is told by the article on “Crossroads”, but was part of the Kastamonu province.

More relevant to the case is the misinformation concerning his death. To begin with, Chilingirian and his three other friends were not dispatched to Ayaş in Ankara. After Chilingirian was sent to Çankırı, the Ottoman Interior Ministry decided not to take any legal proceedings against Chilingirian and stated he was granted permission to move to and settle in any province he liked with the exception of Istanbul. Thus, when Chilingirian and his friends left Çankırı for Ayaş, it was not because the authorities “dispatched” them as the readers are told on “Crossroads”, but because they voluntarily chose to move there to unite with the other prominent Armenians in Ayaş.

Furthermore, the website’s claim that Chilingirian and his friends “were ambushed by a party of Turkish chettehs organized by the local secretary of the Ittihad Party and savagely murdered” has no factual basis. They were indeed ambushed and killed by a Kurdish brigand named “Alo” and his gangs. Not only did this brigand have no relation whatsoever with the Committee of Union and Progress (CUP) or the “Ittihad” (as the website calls them), but he had been engaged in killing, robbing, and raping the Turks whom he and his gang encountered in their path as well as raiding and robbing government forces in the region.

The Ottoman authorities actually pursued the murderers and captured several members of this gang of criminals and put them on trial, which clearly shows that it did not organize and conspire to murder Chilingirian and his friends. Efforts to capture all members of this band, including its leader “Alo,” had been unsuccessful because of the insufficient manpower available in the existing police and gendarme units owing to the state of the world war. Nonetheless, the capture of some members and efforts to capture the rest clearly demonstrates the Ottoman Government’s stance on this issue, which is grossly misrepresented by the newsletter “Crossroads,” not surprising given the hate mongering nature of the newsletter against Turkey and the Turks.