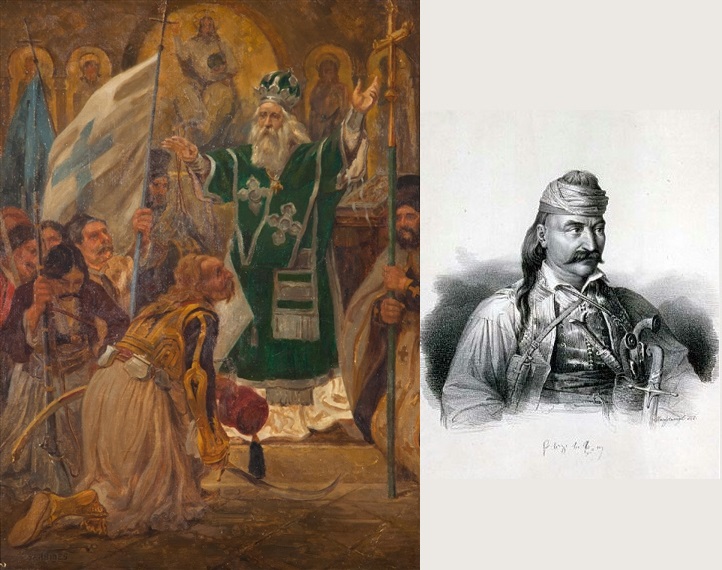 The bicentennial celebrations in Greece, cherished in an overtly nationalistic and mythical mood, for obvious reasons, made no mention of the fate of the Turks that had been completely exterminated by Greece during its “independence” struggle. The more surprising element was not the attitude of the Greeks but that of the “civilized” West. From the United States to France to Germany, European and other western countries rushed to enthusiastically celebrate the 200th anniversary of the Greek independence without, however, a single reference to the fate of the Muslim population in Greece.

To add insult to injury, French and US warplanes flew over Athens to join the celebrations and publicly show their moral and material support to Greece. This gross and insulting indifference on the part of western countries can hardly be reconciled with their oft-repeated references to the human rights and the sacredness of the human lives, and their efforts to point themselves as the champions of humanity in suffering. The US President Joe Biden, in his 24 April statement of this, even referred to Istanbul as “Constantinople”, which no doubt sound like music to the ears of Greek “megali idea” fanatics.

When the Greek rebellion started 200 years ago on the 25 March, the Turkish inhabitants in Morea became the victims of a barbaric campaign of extermination. The symbolic slogan of the rebellion, proclaimed by the Greek Archbishop Germanos III, was "Peace to the Christians! Respect to the Consuls! Death to the Turks!” And indeed, the archbishop’s slogan was realized to the maximum extent possible. As the British historian William St. Clair noted:

“The Turks of Greece left few traces. They disappeared suddenly and finally in the spring of 1821, unmourned and unnoticed by the rest of the world... Upwards of 20,000 Turkish men, women and children were murdered by their Greek neighbours in a few weeks of slaughter. They were killed deliberately, without qualm and scruple... Turkish families living in single farms or small isolated communities were summarily put to death, and their homes burned down over their corpses. Others, when the disturbances began, abandoned home to seek the security of the nearest town, but the defenceless streams of refugees were overwhelmed by bands of armed Greeks. In the smaller towns, the Turkish communities barricaded their houses and attempted to defend themselves as best they could, but few survived. In some places they were driven by hunger to surrender to their attackers on receiving promises of security, but these were seldom honoured. The men were killed at once, and the women and children divided out as slaves, usually to be killed in their turn later. All over the Peloponnese roamed mobs of Greeks armed with clubs, scythes, and a few firearms, killing, plundering and burning. They were often led by Christian priests, who exhorted them to greater efforts in their holy work.”

“… the miserable [Turkish] inhabitants were given over to the lust and cruelty of a mob of savages. Neither sex nor age was spared. Women and children were tortured before being put to death. So great was the slaughter that [Greek guerrilla leader] Kolokotronis himself says that when he entered the town [Tripolitsa], from the gate of the citadel his horse's hoofs never touched the ground. His path of triumph was carpeted with corpses. At the end of two days, the wretched remnant of the Mussulmans were deliberately collected, to the number of some two thousand souls, of every age and sex, but principally women and children, were led out to a ravine in the neighboring mountains, and there butchered like cattle.”

In this context, the Turkish population in Tripolitsa became the victims of attacks and barbaric treatment. In addition to the reference above, British writers and documents also described in gruesome and graphic detail how the Turks “were slowly burnt to death on a fire, after their arms and legs were chopped off.”

The gross indifference of the western countries and their leaders can hardly be attributed to a genuine ignorance. Popular work such as the Victorian classic, George Finlay's History of Greece, or modern works by scholars such as William St. Clair's That Greece Might Still Be Free, would have known that the Greek War of Independence started with the massacre of the Turkish inhabitants of the Peloponnese.

In addition, these horrifying and disgraceful acts were quite well known to the contemporary Europeans (such as Colonel Thomas Gordon) who volunteered on behalf of the Greeks and later had written what they witnessed with remorse and horror. Wilhelm Boldemann, a contemporary German philhellene who volunteered as a doctor in Greek ranks, was so overwhelmed by what he witnessed that he even committed suicide by taking poison.

Many years later, Raphael Lemkin, who coined the term “genocide,” even listed events during the Greek independence as “Genocide by the Greeks against the Turks” in his list of genocides. The international community through the United Nations adopted a definition of “genocide” that was different from that of Lemkin’s. However, Lemkin’s name continues to be frequently referenced (rightly or wrongly) in genocide disputes. In this context, there has not been a single case of condemnation by the European Parliament or the US Congress or individual European countries or states within the US.

In marked contrast to the full-scale campaigns of hate and insult launched against Turkey, there has never been a case in which these self-proclaimed champions of humanity ever expressed remorse or a desire to remember (or remind people of) the Turkish victims. Greece was never asked to recognize this dark page in history by the European parliament or other European institutions or countries and was never asked to face its history. The Greek people or the Greek State was never asked to apologize to the victims’ descendants.

US President Biden has demonstrated this bluntly most recently through his 24 April 2021 statement that nothing has changed in the attitude of the West, promoted both by the church, Catholic as well as Evangelic, and the politicians.

Pictures: (Left) Archbishop Germanos III of Old Patras, whose slogan for the Greek rebellion was "Peace to the Christians! Respect to the Consuls! Death to the Turks!" - Source: MutualArt.com / (Right) Guerilla leader Theodoros Kolokotronis, the ultimate symbol of the Greek independence, who played a leading role in the extermination of the Turks of Morea. - Source: GreekReporter.com