AVİM HELD A CONFERENCE ON MONGOLIA’S POTENTIAL IN THE REGION, THE CURRENT SITUATION IN MONGOLIA PRIOR TO THE 11TH ASIA-EUROPE MEETING (ASEM) AND TURKISH-MONGOLIAN RELATIONS
Commentary No : 2016 / 4
AVİM
18.01.2016
1 min read 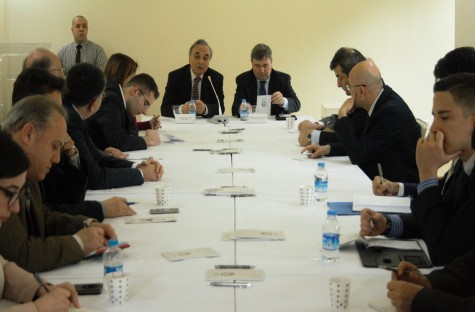 On 18 January, 2015 the Center for Eurasian Studies (AVİM) held a conference to discuss Mongolia’s potential in the region, the current situation in Mongolia prior to the 11th Asia-Europe Meeting (ASEM) as well as Turkish-Mongolian Relations.

Following the opening speech delivered by President of AVİM Ret. Ambassador Alev Kılıç, the Turkish Ambassador to Ulaanbaatar, H.E Murat Karagöz, delivered a thorough presentation on Mongolia’s current situation within the broader regional context focusing on Mongolia’s unique situation. In his presentation, H.E Murat Karagöz touched upon a wide array of topics including but not limited to the historical ties between Turkey and Mongolia, the strategic importance of Mongolia for Turkey and the region, and vice-versa, particularly with the inclusion of Turkey as a ‘Third Neighbour’ in the Mongolian foreign policy. H.E Murat Karagöz also conveyed his views on the potential for economic and trade relations between the two countries, the increasing cooperation in the field of education, the need to allocate more resources and attention on advancing bilateral relations with Mongolia and to develop further economic and commercial ties by taking advantage of all the possible grounds for cooperation.

In the second part of the meeting, discussions continued in the Q&A session with the contributions of the participants which consisted of prominent scholars from universities and think-tanks, namely Anka Institute, representatives from the Ministry of Foreign Affairs, the Ministry of Economy, the Turkish International Cooperation and Development Agency (TIKA), The Presidency for Turks Abroad and Related Communities, the Union of Chambers and Commodity Exchanges of Turkey and from the Public Administration Institute for Turkey and the Middle east (TODAIE). In this section of the meeting, the discussion was centred on Mongolia’s position in the region vis-à-vis Russia and China, and Turkey-Mongolian relations in light of recent developments in the region more broadly.