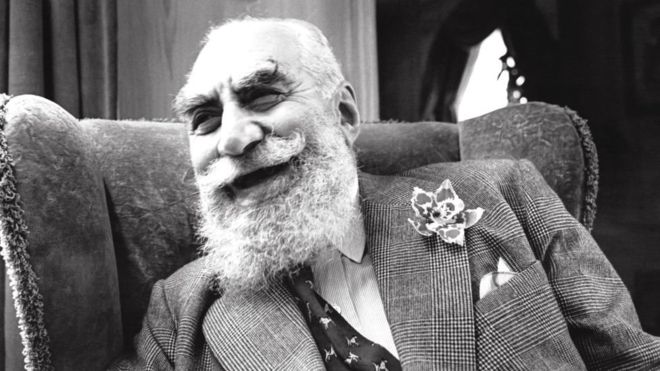 On March 23rd, two postage stamps dedicated to the theme “150th anniversary of Calouste Gulbenkian” have been put into circulation by the Armenian Post Office. The stamps that were prepared in Gulbenkian’s memory were printed in the Cartor printing-house in France with the partnership of the Gulbenkian Foundation in Portugal and the Portuguese Post Office. The stamps depicted Calouste Sarkis Gulbenkian in the background of the artwork in his collection at the Calouste Gulbenkian Museum in Lisbon. The designers from the Portuguese and Armenian post offices worked together in designing the stamps. After the circulation of the stamps, Central Bank of Armenia announced that they would issue commemorative coins dedicated to Gulbenkian’s memory. Herewith it would be good to look closely at Gulbenkian's life and his relations with the Ottomans.

Calouste Sarkis Gulbenkian was an Ottoman citizen of Armenian origin and a businessman who played a role in the matter of Mosul oil because he served as Financial and Economic Advisor to the Ottoman embassies in Paris and London during the last years of Ottoman Empire. Although there are some researches conducted about his life, these are not consistent with each other. Rumour has it that Gulbenkian himself made a great effort to keep the details of his life private.

The research about him are mostly related with the Mosul oil and his interest on fine arts. By the nature of Gulbenkian’s education, his articles on the Baku oil caught the attention of Sultan Abdulhamid II. He acted as an advisor to the Sultan regarding this subject. Abdulhamid II demanded Gulbenkian to make a study on the oil reserves in Mesopotamia and Ottoman lands. As a result of this study, the possible oil regions’ land titles were acquired by Abdulhamid II.

At the beginning of the 1900s, Gulbenkian and his family moved to Egypt to avoid the negative effects of the unfolding Hunchak and Dashnak activities on their business operations. Calouste Gulbenkian’s son, Nubar Gulbenkian, later associated the reason behind his family’s leaving the Ottoman Empire with the genocide allegations in his autobiography. But, at this point, it is necessary to remind a specific issue that some academic studies have focused on. Gulbenkian spent almost all of his educational life in London and Paris. Because of that, he knew these cities quite well. Thus, it is more possible that if Gulbenkian was fleeing from any danger, he would have preferred these cities instead of Egypt which he had never been before.[1] As a matter of fact, it is thought that Egypt’s ruler at the time, Nubar Pasha had invited him there because of his studies on oil and that this was the reason for him going there. In addition to this, Nubar Gulbenkian contacted the relevant authorities in 1964 to reclaim his Turkish citizenship and he had a positive result. Hence, it can be deduced that his aforementioned claims might have been written because of the pressure of the diaspora.[2]

On the other hand, Gulbenkian has companies operating in various fields in London. Because of that, after Egypt, he went back to London and became a British citizen in 1902. But nevertheless, he never severed his ties with the Ottoman Empire and served at the embassies in London and Paris.[3]

Many of the foreign companies had been in dispute over the Mosul oil shortly before the First World War. Gulbenkian, being a known figure in these circles and having good relations with the Ottoman Empire, played the role of a mediator on these issues. On the other hand, Gulbenkian has been a pioneer in establishing the Turkish Petrol Company in 1912 which transformed into the Iraq Petrol Company in 1929.[4] Initially, he even owned twenty-five percent of the Turkish Petrol’s shares. However, he then transferred some of his shares to the Americans in agreement and became a shareholder with five percent of the shares. After that time, he became known as “Mr. Five Percent”.

Gulbenkian became an art collector after his intensive work pace during World War I. Gulbenkian, who had a large collection in his home in London, wanted to open a museum. It is rumored that he even contacted Turkey about it. But following his death in Portugal, where he retired during the last years of his life, a foundation was established in his name. And Gulbenkian’s collection began being exhibited there.

Gulbenkian emigrated from the Ottoman lands before the 1915 events and had not made any declaration on this issue in his entire life. As a matter of fact, according to Yalçın Bayer[5], Gulbenkian, in his travels to Turkey, was welcomed with state protocol. From this point of view, it can be seen that he had good relations with Turkey.

However, when the activities of the Gulbenkian Foundation, which was established in the name of Gulbenkian, are examined, it can be seen that a biased approach was taken to reflect the events of 1915. In fact, on the website of the foundation, Gulbenkian’s life story has statements like “He escaped from the organized attacks triggered by the Armenian activists’ raid on the Ottoman Bank”. As described above, it is more plausible that the reason for his departure was the attackers’ threat to his business life rather than the state’s threat to his family after these raids. It does not seem appropriate for a foundation that claims to keep Gulbenkian's name alive, trying to make other allegations live through a businessman who has not been involved in this matter for his entire life.