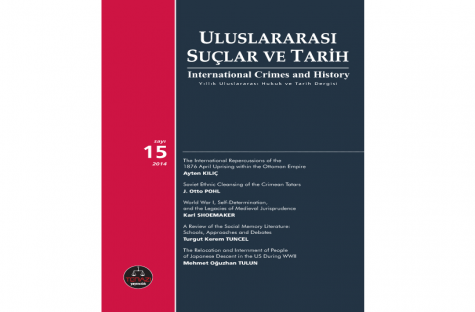 The latest issue of the Journal of International Crimes and History has been released. As it was remarked at the first issue, the research area of the journal is the massacres and atrocities that have occurred in the history, and the scientific investigation of these, especially on the Balkan, the Caucasus and the Middle East countries which constitute the Ottoman geography. Our journal extended its area of research and interest by publishing articles not only about history, but also similar recent events occurring outside of the geography we mentioned above.

The first of five articles in the current issue of our journal is entitled The International Repercussions of the 1876 April Uprising within the Ottoman Empire written by Ayten Kılıç. As the author states, despite being a failure, this uprising lead to the 1877-78 Ottoman-Russian War and prepared the collapse of the Ottoman Empire through large territorial losses in the Balkans.

Otto Pohl, in his article entitled Soviet Ethnic Cleansing of the Crimean Tatars, describes that the Crimean Tatars, charged of treason, were exiled to Uzbekistan and other regions, and worked under difficult conditions. He tells that tens of thousands of Crimean Tatars died and the survivors were allowed to return to their homelands only after 1989.

In his article entitled World War I, Self-Determination, and the Legacies of Medieval Jurisprudence, Karl Shoemaker indicates that nations’ right of self-determination dates back to the Middle Ages, but was reshaped in 19th and 20th centuries, and it had some effect especially on the Balkans under Ottoman rule during the 19th century and on the 1919 Versailles peace negotiations.

Turgut Kerem Tuncel, in his study entitled A Review of the Social Memory Literature: Schools, Approaches and Debates, addresses social memory on a theoretical level by tracing different schools and approaches, and debates among them.

In his article entitled The Relocation and Internment of People of Japanese Descent in the USA during WWII, Mehmet Oğuzhan Tulun analyzes a lesser known event in our country, the relocation and internment of the Japanese-Americans, despite being innocent, by the US Government during the Second World War, and compares it with the Armenian resettlement.

Have a nice read.

*This text includes a part of the Editorial Note included in the 15th issue of the Journal of International Crimes and History.