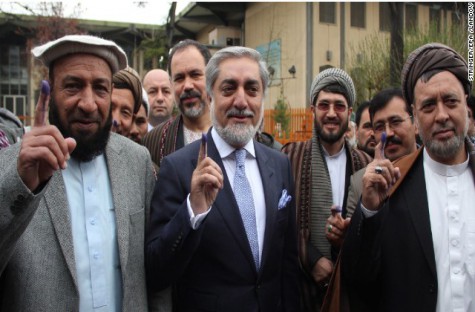 
The early results of the election indicate a run-off vote is likely.


"Today we announce the partial results of 26 provinces with 10 percent of votes counted, these include [provinces] in the north, south, east, west and Kabul," Yousuf Nuristani, the IEC chief, said on Sunday.


A run-off election between the two leading candidates will become inevitable if no single candidate gains more than 50 percent of the vote when the final results are announced in late May.


But Nuristani cautioned against reading too much into the early results.


Of the eight provinces for which results have not been announced, two are in the north [Badakhshan and Baghlan], two in the east [Nuristan and Paktika], central Daykundi, southern Ghazni and Wardak and western Ghor.


Abdullah, who was born to an ethnic Pashtun father and a Tajik mother, is more associated with the northern Tajiks.

The eventual winner will need to lead the fight against a resurgent Taliban as US-led combat troops prepare to leave at the end of the year, and also strengthen an economy reliant on declining aid money.


More than seven million people defied bad weather and Taliban threats of violence to vote in the April 5 first round of the election, earning praise from world leaders.


In the run-up to the vote. there were fears that a repeat of the extensive fraud which blighted Karzai's re-election in 2009 would undermine the winner's legitimacy at a difficult time for the country.


But the Election Complaints Commission announced on Sunday that there had been "less fraud" in the current poll.


"We have received 1892 complaints with evidence, 1382 through phone," Nader Mohseni, a spokesman said, adding that 870 of the complaints fell into the most serious category.


"We will review all the complaints. Based on the reviews and numbers provided by the observers there has been less fraud in this election compared to the previous one," he said.