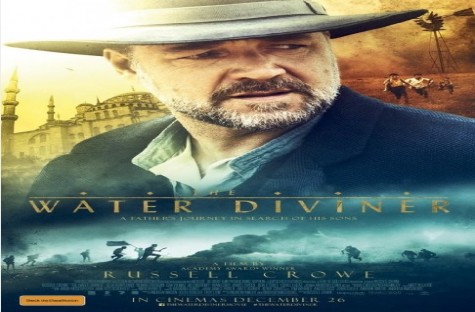 The Water Diviner, which is directed by famous actor Russell Crowe who also took the leading role, was released in December 2014 in Turkey. The movie is about an Australian father of three Anzac soldiers who arrives in Turkey after the war seeking his sons’ fate. Grandson of an Anzac, Russell Crowe has stated that they took inspiration from a letter of the period. The Water Diviner is significant in the sense that the Battle of Çanakkale was a turning point in our history. Moreover, the movie is noteworthy in the sense that it is a Western made movie (co-production in USA, Australia and Turkey) that reflects on the history of the Turkish nation that was in a life and death struggle.

Water Diviner stands out with its approach of reflecting what happened in Çanakkale in an unbiased manner. It seems that the scenarists wrote the movie with a good knowledge of Turkey, the Turkish people and the history of the nation. It stands out as a western made movie that reflected the period on the screen from the historical viewpoint of the Turkish nation who was under invasion and experienced a horrible atrocity. The period in which Istanbul and Western Anatolia were under invasion was successfully reflected on the screen. Thus, it stands out in one of the most impressive scenes, when the Turkish commander’s responds to the father, who blamed him for the deaths of his sons, along the lines of “You invaded our land. You were the one who sent your sons to our land.” As Crowe pointed out in an interview as well, the movie underlines the fact that the Anzac corps unrightfully invaded a sovereign state.

In other respects, the Water Diviner draws attention by its humanistic and peaceful approach. The movie exposes the tragedy in the Battle of Çanakkale and the trauma it brought on the Turkish nation and the peoples of the Anzacs.  In doing this, it reminds the audience that wars do not just spoil down to political calculations but those are humanbeings who fought in battlefronts. In fact, one of the most striking scenes of the movie is the one where the three brothers lie wounded on the battleground. In this scene, the director shows the battleground from a wide angle and simply reminds us that those who died there, regardless of their nationality, were firstly human. In addition, the movie, on the one hand, contributes to narrating what the Turkish nation had gone through, and, on the other hand, allows for the Turkish nation to understand those who fought on the other side. A movie that may be considered to have an anti-war tendency, the Water Diviner succeeded in reflecting the shared pain of the period in a humanistic manner.

Lastly, considering Armenian allegations regarding the events of 1915, the Water Diviner, indirectly gives a message that misery and tragedy the Armenians have claimed against the Turks is a part of a shared history. Moreover, it gives the message that Turkish nation, who was fighting on five fronts at the time and, thus, was in a life and death struggle, was not in a position to execute a policy of genocide against Armenians.