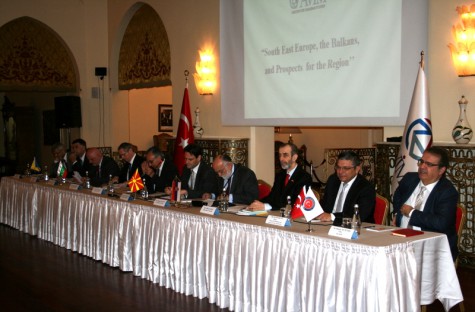 Center for Eurasian Studies  (AVIM)  has organized a brain-storming session on the topic   “South East Europe, the Balkans, and Prospects for the Region” in the format of a panel presentation. The panel was composed of Ambassadors of Bosnia and Herzegovina,  Bulgaria, Croatia,  Macedonia,  Serbia and Slovenia as well as the  Director General for the Balkans and Central Europe from the Turkish Ministry of Foreign Affairs and a representative from the Turkish Cooperation and Coordination Agency (TIKA).


Ambassador Babür Hızlan, Director General for the Balkans and Central Europe in the Turkish Foreign Ministry stated that despite the economic crisis, there are no military conflicts in the peninsula and there is a positive momentum that needed to be seized. He further emphasized the importance of memberships to the European and Euro-Atlantic structures on the road to stability and added that the start of negotiations between Serbia and the EU following the agreement between Serbia and Kosovo has been one of the positive developments.  Underlining Turkey’s role as an important energy route for Balkans and Europe, Ambassador Hızlan stated that Turkey’s interest is to have stability in the Balkans and added that Turkey has been providing economic aid to the region through Turkish Cooperation and Coordination Agency (TIKA).

Ambassador of Bosnia and Herzegovina H.E. Damir Dzanko, stated that Bosnia has an advanced status in the talks with the EU and NATO but due to domestic political struggles, they are not able to fully fulfill some basic requirements.  He has stated that the Bosnian foreign policy prioritizes cooperation with the neighboring countries and that Bosnia encourages all sorts of mechanisms of regional cooperation especially those which aim to enhance economic relations.  Ambassador Dzanko has reiterated the successful and fruitful trilateral mechanism between Bosnia, Serbia and Turkey and has added that the mechanism is approaching a new stage. He further emphasized Turkey’s role in negotiations between Croatia and Bosnia and that he hoped that a trilateral summit will be organized by the end of this year.

Ambassador of Croatia, H.E. Drazen Hrastic emphasized that Croatia, as the latest member of EU and NATO, is the first post-conflict country to manage to join both organizations. Emphasizing the role of international organizations in bringing peace to the European continent, Ambassador Hrastic stated that the EU membership is not about the end result but it is about the accession process itself.  He has emphasized that the Euro-Atlantic cooperation is of great importance for the Croatian foreign policy.


Ambassador of Macedonia, H.E. Goran Taskovski, stated that economic development lies at the roots of better cooperation in the Balkans and outlined projects for enhanced relations both with neighbors as well as with organizations of regional cooperation, particularly underlining the South East European Cooperation Programme (SEEP) and the Regional Cooperation Council (RCC). Ambassador Taskovski expressed that the dedication of the Macedonian government to economy and all of the positive results that have been achieved are sufficient enough to force upon the region that economic prosperity as well as political and ethnical stability are possible and they should not be given up.

Ambassador of Serbia, H.E. Danilo Vucetic, emphasized the role of the EU in enhancing democracy, rule of law, economic development and human rights in the region and added that the best way to enhance cooperation in the region would be through regional organizations. Ambassador Vucetic stated that Serbia is contributing to regional stability through its EU membership prospects of which the negotiations started in January. He has also added that Serbia sees stability of Bosnia and Herzegovina as an important factor of stability of the entire region.


Ambassador of Slovenia, H.E. Milan Jazbec, stated that the Western Balkans is the priority for Slovenian foreign policy and highlighted Slovenia’s developing economic relations with the countries in the region. He stated that transatlantic cooperation is key for stability in the region and that Slovenia gives its full support to every effort on this matter. With regard to regional cooperation, on the way ahead, Ambassador Jazbec stated, Slovenia would like to see a more of a conceptualized and coordinated approach, more funds and higher level of implementation.

Mr. Hakan Seçilmiş, Specialist in Turkish Cooperation and Coordination Agency (TIKA), made a presentation of TIKA’s background and its activity in the region. Mr. Seçilmiş has stated that TIKA has 35 coordination offices in 32 countries, and that it performs its projects according to the needs and priorities of its cooperation partners with a special attention to the fields of education, health, water supply, agriculture and culture.