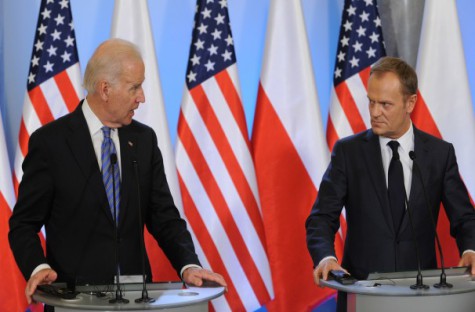 Citing the need for friends to “stand with one another,” Vice President Joseph R. Biden Jr. reassured Poland and the Baltic states on Tuesday that the United States would protect them from any Russian aggression like the actions the Kremlin has taken in Crimea.


In the first of two days of hastily arranged meetings with the leaders of Poland, Estonia, Latvia, and Lithuania, Mr. Biden mixed bracing words with promises of modest military aid to shore up the NATO alliance and build solidarity in the face of the deepening crisis over Ukraine.


His first session, with Prime Minister Donald Tusk of Poland, occurred at the same time that President Vladimir V. Putin of Russia was laying out his case for annexing Crimea before his country’s parliament, the Duma. Mr. Biden and Mr. Tusk emerged grim-faced to speak to reporters afterward.


“Russia has offered a variety of arguments to justify what is nothing more than a land grab,” the vice president said, “but the world has rejected those arguments.” He said that Russia stands alone, “naked before the world,” in its aggression.


Mr. Tusk was even more impassioned, saying that Mr. Biden’s visit came at a fateful moment when the geopolitical landscape of post-World War II Europe was being rearranged as never before. “Before our eyes,” he said, “the history of our region is changing.”


In such turbulent times, Mr. Tusk said, the alliance between NATO’s European members and the United States could act as a brake on Moscow. “Only Euro-Atlantic solidarity will allow us to prepare sufficient and strong reactions to Russia’s aggression,” he said.


Mr. Biden’s trip is meant to send a conspicuous message to Moscow, reinforcing the limited sanctions that the United States and the European Union announced on Monday against Russian officials and their allies over the parts they played in events in Crimea.


But the military aid Mr. Biden promised was mostly familiar: an additional 12 F-16 fighter jets for Poland and 10 more American F-15’s, instead of a planned four, assigned to a NATO operation that polices the skies over the Baltic states. He also spoke of rotating more American ground and naval forces through the Baltics for training exercises.


The Baltic states cannot take the heightened air patrols for granted. The American aircraft will rotate back out of the region in a few weeks, to be replaced by Polish aircraft. A senior administration official said the goal was to keep the number of fighter jets on hand in the area constant.


The vice president announced no changes to the American missile defense system being built in Poland and Romania. He said the project was on track and would be operational by 2018.


Mr. Biden’s visit comes at a time of deep unease in Eastern Europe about the reliability of the United States as a guarantor of its security. President Obama’s announced shift of military and diplomatic emphasis toward Asia was viewed by many here as a turning away from Europe, while NATO has seemed to be groping for new purpose in the long twilight of the war in Afghanistan.


Poland and the three Baltic states are seen as less vulnerable to Russian pressure than Ukraine is, because their NATO membership guarantees that they will be defended if they come under attack. But their history as former Soviet satellites left deep anxieties that were revived by the Russian incursion into Ukraine.


In Poland, Ukraine has become a volatile political issue. The opposition has sounded alarms that the country could be Russia’s next target, and has criticized Mr. Tusk’s government, which had cultivated constructive relations with Moscow.


The president of Poland, Bronislaw Komorowski, said Russia’s aggression should come as no surprise, given that Russia had quadrupled its military budget over the last eight years while some European countries were cutting theirs.


In his response, Mr. Biden said, “You have an ally whose budget is larger than the next 10 nations in the world combined, so don’t worry about where we are.”


Mr. Komorowski said he had reminded Mr. Biden of Poland’s success in resisting Soviet aggression in the 1980s. At that time, he said, the Soviets were weakened by wild swings in the price of oil and gas, as well as the ruinously expensive arms race.


The vice president raised energy security with the Europeans, many of whom rely on Russia for much of their natural gas. He urged them to diversify their energy sources by investing in shale gas and nuclear technology, making the countries less vulnerable to Russia using its gas shipments as a political weapon.


American lawmakers have called on the Obama administration to speed up permits that would allow shipments of more American liquefied natural gas to Europe. But to date, the administration has issued only six permits for the construction of export terminals.


Mr. Biden did not raise gas exports to Europe in his public remarks, and a senior official traveling with him said there were various legal and regulatory hurdles to starting a major trade in gas.


At least one president — Toomas Hendrik Ilves of Estonia — zeroed in on Europe’s fossil-fuel dependency as a cause for what he said was a weak European response to Russia’s incursion in Crimea.


“The response should not be about the price of gas,” Mr. Ilves said after his meeting with Mr. Biden. “It should be about common values, and the price of not adhering to those values.”