CENTER FOR EURASIAN STUDIES (AVİM) HELD A BRAIN-STORMING MEETING ON THE TOPIC “ EURASIAN PERSPECTIVES- THE VIEWS FROM KAZAKHSTAN AND TURKEY”.
Commentary No : 2014 / 33
Hande Apakan
25.02.2014
3 min read 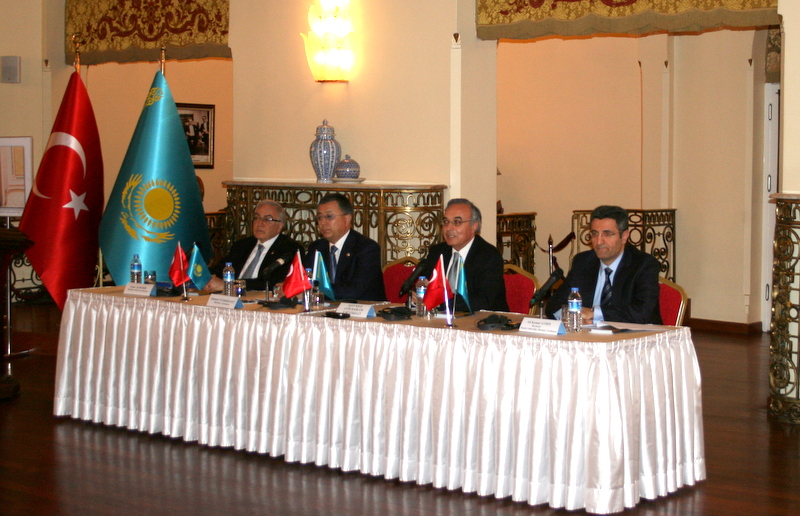 Center for Eurasian Studies (AVİM) held a brain-storming meeting on 25th of February, on the topic “ Eurasian Perspectives- The Views from Kazakhstan and Turkey”.


The brain-storm meeting began with presentation by H.E. Zhanseit Tuimebayev, Ambassador of the Republic of Kazakhstan in Ankara, titled “New Trends in Eurasia and the Role of Kazakhstan.” The meeting continued with presentations by H.E. Ambassador Ali Kemal Aydın, Deputy Undersecretary of the Turkish Ministry of Foreign Affairs, and H.E. Ambassador Çınar Aldemir, Executive Director of the Conference on Interaction and Confidence Building Measures in Asia (CICA).

Underlining that Turkish-Kazakh relations are based on mutual trust and respect, Ambassador Tuimebayev stated that bilateral political relations have been consolidated with reciprocated visits, with the signing of the Strategic Partnership Agreement, and with the establishment of the High Level Strategic Cooperation Council. In relation to this, Ambassador Tuimebayev has added that regional and international cooperation is rapidly developing as well. Ambassador Tuimebayev continued with his presentation by making references to Kazakhstan’s global and regional role, and has expressed that Kazakhstan carries importance in terms of transit routes due to its geographic location, and its stabile and favorable landscape. Ambassador Tuimebayev has indicated that regional integration is the most desirable solution, and pointed out the importance of the establishment of joint energy systems and the construction of Eurasian transportation routes.


In his turn, Ambassador Ali Kemal Aydın, Deputy Undersecretary of the Turkish Ministry of Foreign Affairs has touched upon the fact that recent developments have raised the importance of Asia and has stated that it is not possible to foresee integration in the short term in the region similar to that of the European Union, pointing out the heterogeneous structure of the continent. Ambassador Aydın has stated that it would be more to the point to consider economic structures. Ambassador Aydın has mentioned cultural and historical ties between Turkey and Asia, and pointed out the importance of peace and stability in the region for the Turkish foreign policy. Furthermore, Ambassador Aydın has mentioned Turkey’s active contributions to the political security, economy and cultural initiatives and in this regard. He has added that it is important for Turkey to establish institutionalized dialogue mechanisms in coordination with regional cooperation organizations. Referring to the challenges in Central Asia, he has drawn attention to the re-construction of the historical silk roads, bringing south-north corridors into action, the population movements and problems originated from Afghanistan.   Ambassador Aydın has stated that it is up to the cooperation among Turkic Republics to turn these challenges into opportunities.


Lastly, the Executive Director of the Conference on Interaction and Confidence Building Measures in Asia (CICA), H.E. Ambassador Çınar Aldemir, has mentioned CICA’s activities and its contribution to peace and stability in the region. Stating that CICA, with its 24 members, covers Asia partly, Ambassador Aldemir, has pointed out the confidence building measures adopted under 5 main dimensions: “military-political”, “economic”, “environmental”, “human” and “new challenges and threats”, and stated that the biggest developments have been observed in the economic area, while adding that CICA member-states may view security issues very differently from each other. Ambassador Aldemir has stated that confidence building measures under “new challenges and threats” dimension is the most important in CICA’s sphere of activity. Finally, Ambassador Aldemir has stated that CICA has the characteristics and activities of an international institution although it is officially not an international institution, and pointed out that it lacks a conflict prevention center such as in Organization for Security and Co-operation in Europe (OSCE).