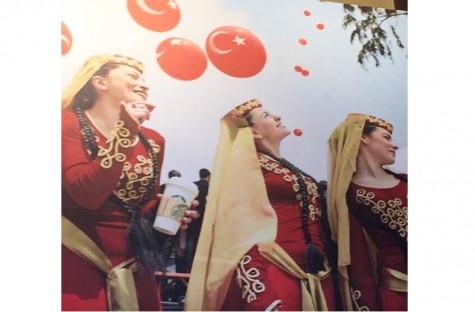 On 18 February 2015, Armenian publication Asbarez.com shared a piece of news titled “Starbucks to Remove Offensive Posters from Stores”.[i] The news piece stated that a branch of the coffee retailer Starbucks in the state of California of the United States had put up posters (pictured on the left) that upset many of its customers. The customers alleged that the posters pictured “women wearing Armenian traditional costumes under the Turkish Crescent and Star” and that they were shocked upon seeing these posters. Armenians utilized social media to express that they felt insulted by Starbucks’ actions and called for the coffee retailer’s boycott. Starbucks did not elaborate on why the posters were put up, but apologized for upsetting its customers and stated that it would start removing these posters from its branches.

The customers were “shocked” to see women wearing such costumes under “the Turkish Crescent and Star”. In essence, this means that the mere sight of the Turkish Crescent and Star is upsetting for people of Armenian descent. This is, essentially, a part of the Armenian dispora’s blanket dislike of anything related to Turkey and Turks and easily translates into anti-Turkish stance and propaganda.

Starbucks, which by the way has scores of loyal customers in Turkey, has succumbed to the anti-Turkish propaganda carried out by uninformed and racist members of the Armenian diaspora. If Starbucks is to apologize, it should be to the Turkish people (especially to people of Turkish descent living in the US) for succumbing to such ignorant propaganda.

[i] “Starbucks to Remove Offensive Posters from Stores”, Asbarez.com, http://asbarez.com/131873/starbucks-to-remove-offensive-posters-from-stores/