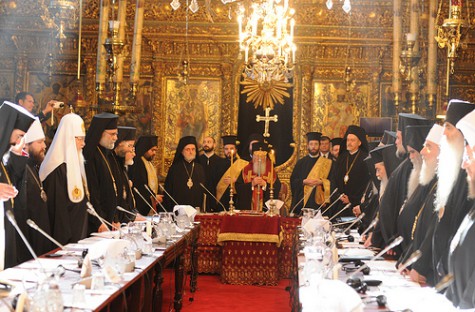 Upon the invitation made by Patriarch Bartholomew I of the Greek Patriarchate of Constantinople (Istanbul), patriarchs of the various Orthodox churches convened as an assembly (officially called a “synaxis”) in Istanbul between March 6 and 9, 2014.[i] They firstly called for a peaceful resolution to the ongoing crisis in Ukraine and condemned the violence that is causing Christians in the Middle East to flee from their homes. After these statements, the assembly came to a very important agreement; they decided to organize a council which will take place in 2016 in Istanbul under the leadership of Bartholomew I.[ii] In this council, officially called the “Holy and Great Synod”, Orthodox churches representing nearly 300 million Christians will convene in order to come to important decisions that will affect all of Orthodox Christianity.

Since the term “Orthodox Christianity” leads to misunderstandings, it will be beneficial to provide an explanation at this point. In the most general sense, there are two Orthodox Christian groups in the world that are separate from each other due to differences in religious doctrine. In English, one group is referred to as Eastern Orthodox, while the other group is referred as Oriental Orthodox (although both groups identify themselves simply as Orthodox). To give an example, the Greek Patriarchate of Constantinople and the Russian Orthodox Church are Eastern Orthodox churches. The Armenian Apostolic Church and the Coptic Orthodox Church of Alexandria are two examples of Oriental Orthodox churches. Oriental Orthodox churches were not involved with the assembly that took place in Istanbul, nor will they be involved with the council that will take place in 2016.

Although separate from each other due to religious doctrine, the two Orthodox Christian groups nevertheless engage in dialogue with each other. Furthermore, churches that are a part of these two groups are members of the World Council of Churches, which is an international Christian organization. These churches cooperate with each other and maintain solidarity within the framework of this organization.

Going back to the original topic, the aforementioned council has been in preparation since the 1960s, and the last time it convened was in the year 843 in Nicaea (modern day Iznik, Turkey). Since Eastern Orthodox Christians do not recognize any Christian council that convened after this date, the 2016 Council will be for them the first council to convene in nearly 1200 years.[iii]

It has been reported that the 2016 Council will most likely have two issues on its agenda.[iv]

The first issue is about the relationship between the various Eastern Orthodox churches that are independent of each other, but which at the same time constitute as a whole the Eastern Orthodox Church. There are two conflicting opinions on this issue. One opinion considers the relationship amongst the churches to be based on cooperation that is based on mutual interests. From the perspective of this opinion, the Eastern Orthodox churches are independent entities that behave like sovereign states. The other opinion considers the relationship amongst the churches to be like a confederation (some would even say a federation), and that there is a not merely a ceremonial but a real leader (officially called a “primus”) of the Church.[v] The 2016 Council will attempt to find a compromise in terms of these two conflicting opinions.

The second issue is about the relationship of the Eastern Orthodox Church with churches that espouse a different concept of Christianity. Similar to the first issue, there is disagreement on the term primus in here as well. According to one opinion, the Greek Patriarch of Constantinople’s title of first among equals (“primus inter pares”) is simply an honorary title, and does not mean that the Patriarch has authority over other Eastern Orthodox churches. Another opinion states the complete opposite however; it states that the Greek Patriarchate of Constantinople is the first church without equal, and that as the first church it (and consequently its patriarch) has both real authority and responsibility for the other churches. It is reported that the only way for the Eastern Orthodox Church to establish consistent relations with churches with a different concept of Christianity is for it to find a solution to this disagreement over the term primus. This is especially true in terms of the Eastern Orthodox Church’s relations with the Roman Catholic Church, since the Roman Catholic Church itself claims to be the first amongst equals in the Christian world.

Since both of these issues are highly contentious, it is indicated that the 2016 Council is unlikely to reach a concrete solution to these issues.[vi] This unlikelihood is made even more apparent due to the agreement that decisions taken during the 2016 Council must be based on unanimity. Although the assembly that took place on March 6-9, 2014 decided on organizing a council, the unity achieved during this assembly is a fragile one due to the ongoing frictions between the Eastern Orthodox churches. For example, there is friction between the Greek Patriarchate of Constantinople and the Russian Orthodox Church due to their disagreement over the term primus.[vii] Additionally, due to various reasons the Greek Orthodox Church of Antioch (Antakya), Orthodox Church of the Czech lands and Slovakia, and the Orthodox Church in America have not signed the decisions taken during the aforementioned assembly.

Lastly, even before the 2016 Council has started, disagreements have begun to occur over the adjective that should be used to describe it. While some sources refer to the 2016 Council as an “Ecumenical Council”[viii], other sources (like the Russian Orthodox Church) refer to it as a “Pan-Orthodox Council”[ix]. The term “ecumenical” means “that which calls upon Christian unity”. The 2016 Council can be referred to as being “ecumenical” in the sense that it aims to solve the common problems of Eastern Orthodox Christians and thus achieve unity. However, it is only pan-Orthodox in the sense that will only bring together Eastern Orthodox Christians. Furthermore, some sources indicate that a council may only be deemed to be ecumenical through evaluations done after it has taken place.[x]

Despite all the disputes experienced within the Eastern Orthodox Church and the disagreements over the nature of the 2016 Council, the fact that the Council will take place after such a long time is an important development. The Christian world is putting a joint effort at moving towards unity despite all differences within it, and the council that will take place in 2016 will be a clear indication of this effort.

[iii] Church of God News, “Orthodox agree to eighth ecumenical council: If Orthodox prophecy is correct on it, this council marks a major step towards the end!” (posted on March 12, 2014) - http://www.cogwriter.com/news/prophecy/orthodox-agree-to-eighth-ecumenical-council-if-orthodox-prophecy-is-correct-this-council-marks-a-major-step-towards-the-end/. Catholic World News, “Eastern Orthodox churches to hold pan-Orthodox council in 2016,” (posted on March 10, 2014) - http://www.catholicculture.org/news/headlines/index.cfm?storyid=20727

[iv] The Catholic World Report, “The Fragile Promise of the Pan-Orthodox Council,” (posted on March 14, 2014) - http://www.catholicworldreport.com/Item/3001/the_fragile_promise_of_the_panorthodox_council.aspx

[v] The Greek Patriarchate of Constantinople is considered to be the primus in Eastern Orthodox Christianity.

[vi] The Catholic World Report, “The Fragile Promise of the Pan-Orthodox Council.”

[vii] Russian Orthodox Churh, “Position of the Moscow Patriarchate on the problem of primacy in the Universal Church,” (posted on December 26, 2013) - https://mospat.ru/en/2013/12/26/news96344/. The Ecumenical Patriarchate of Constantinople, “FIRST WITHOUT EQUALS,” - http://www.patriarchate.org/documents/first-without-equals-elpidophoros-lambriniadis.