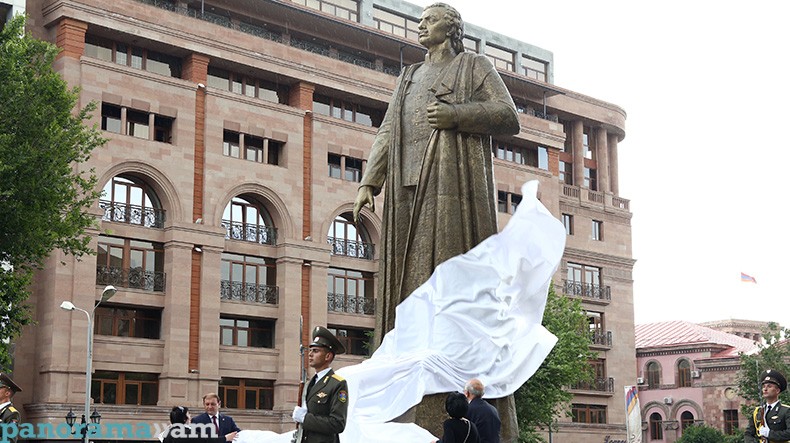 On May 28, a statue of Garegin Nzhdeh was unveiled in the capital of Armenia, Yerevan with the attendance of officials at the highest level.[1] The officials of Armenia who attended the opening ceremony were: the President, Prime Minister, Speaker and Deputy Speakers of the National Assembly, Mayor of Yerevan, National Assembly deputies, and various members of the government.

In Armenia, Nzhdeh is seen as a statesman and as a military and political figure,[2] and is remembered as a national hero.[3] He is also the person upon whom the current party in power in Armenia, the Republican Party, bases its ideals on.[4] Despite being remembered as such in Armenia, the real Nzhdeh, as put forth for by historical records, is known as an espouser of racist and fascist ideologies and as someone who fought alongside the Nazis (for whom he sympathized with) during World War II[5] (Even six years before the outbreak of World War II, meaning 1933, the Nazi Party had categorized Armenians as belonging to the “superior Aryan race”[6]). The real Nzhdeh carried out massacres against the Azeris in the Caucasus and was the leader of the Armenian Legion established by the Nazis.[7] The fact that the unveiling of the statue of such a perpetrator of massacres and a Nazi war criminal was attended by the above mentioned officials is development that should be of concern, since in this way, Nzhdeh is being officially commemorated and glorified in Armenia. The engraving of Nzhdeh onto the memory of Armenia and the Armenian people is not limited to a single statue however; there is also a metro station, a public square, and a monument in his name in Yerevan.

As a side note, a hateful, extremist person being commemorated and glorified in such a way in Armenia is not an isolated incident. For example, Drastamat “Dro” Kanayan, another perpetrator of massacres and a Nazi sympathizer (and someone who wore the Nazi uniform), is commemorated and glorified in the same manner. Another example is the fact that the members of the ASALA terror group, who murdered Turkish diplomats, are treated literally as national heroes in Armenia.[8] There is a monument in ASALA’s name located in a military cemetery in Yerevan. Another monument in ASALA’s name was unveiled in the city of Vanadzor. The opening ceremony for this monument was attended by the priests of the Armenian Apostolic Church, while the ceremony was broadcasted from the TV channel set up by the Church. Monte Melkonian, one of the leading members of the terror group, is buried in the military cemetery in Yerevan and there is also Melkonian bust in the same city. All of these examples showcase the level of sympathy in Armenia shown for people with hateful and extremist mindsets.

The fact that Nzhdeh was commemorated and glorified in such a way has understandably caused disturbance in Russia. As the leader of the Armenian Legion of the Nazis during World War II, Nzhdeh fought against the forces of the Soviet Union and also killed Soviet citizens. In Russia, it was the news website Vestnik Kavkaza who brought attention to the unveiling of Nzhdeh’s statue. The presidents of the institutions with whom Vestnik Kavkaza conducted interviews with evaluated the unveiling of the statue with high level attendance as an attack and a show of disrespect against Russia.[9] They also pointed out just how divergent Armenia’s understanding of history is in comparison to Russia’s understanding of history on certain sensitive issues.

Despite this, as expressed by Vestnik Kavkaza, the Russian media did not pay attention to the unveiling of Nzhdeh’s statue.[10] For example, the news channel RT and the news agency Sputnik, both of which pay close attention to anything that might be to the detriment of Russia’s interests and which propagate Russia’s official views to the world, have not in any way mentioned this piece of news. Meanwhile, two weeks after the unveiling of Nzhdeh’s statue, Russian Ministry of Foreign Affairs Spokesperson Maria Zakharova, responding to a question about the statue, indicated that Russia is against any revival or glorification of any form of Nazism and “it was not clear” to Russia why such a statue was installed.[11] As can be understood from this response, the Russian government did not show a serious reaction to this development. The Republican Party of Armenia nevertheless objected even to this mild reaction from Russia; the party’s spokesperson Eduard Sharmazanov stated that Nzhdeh “is one of the greatest heroes of the Armenian nation”.[12]

The most recent development with regards to Njdeh’s statue (triggered by Vestnik Kavkaza’s insistence on drawing attention to this issue) is an inquiry prepared by a Russian deputy addressed to the Russian Minister of Foreign Affairs Sergey Lavrov, with a request to use diplomatic measures against Armenia regarding the installment of the statue.[13]

Despite the disturbance caused by the unveiling of the Njdeh’s statue, what lies behind Russia’s restrained response to Armenia is no doubt the fact that the two countries are currently allies. Armenia acts as a base for Russia to spread its influence in the Caucasus. Despite its disapproval, Russia does not want to push away a critical ally like Armenia by reacting in a harsh manner. As a matter of fact, following the 4 Day War in Karabakh between Azerbaijan and Armenia, a serious resentment has emerged in Armenia towards Russia.[14] The Armenian public believes that Russia did not support Armenia enough during the war and that Russia even caused Armenia to fall into a disadvantageous position due to the weapons it sold to Azerbaijan. Specialists on the Caucasus interpret the unveiling of the Njdeh’s statue with high level attendance as Armenia’s message to Russia. In a time when there is resentment towards Russia in the Armenian public, Russia’s mild response regarding the statue of Njdeh is understandable. However, specialists indicate that, despite this mild response, the statue has led Russia to review its approach towards Armenia.

Armenia demonstrated its reaction to its closest ally Russia in a very insulting manner. What kind of an attitude will Armenia, which treated even its closest ally in such a manner, exhibit towards countries that it sees as a historical enemy is a matter that should be seriously addressed.

[5] Gauin, “What Kind Of “Reconciliation” Is The Hrant-Dink Foundation Promoting?”

[11] “Russian Foreign Ministry assesses the installation of a monument to a war criminal in Yerevan”, Vestnik Kavkaza, http://vestnikkavkaza.net/articles/Russian-Foreign-Ministry-assesses-the-installation-of-a-monument-to-a-war-criminal-in-Yerevan.html