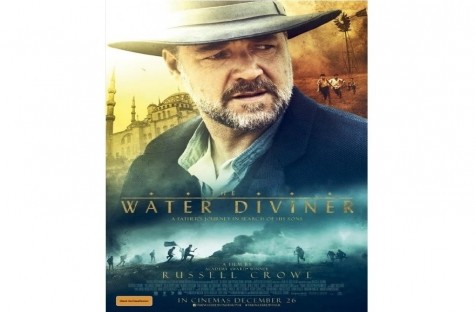 The film Water Diviner, the directorial debut of the famous New Zealander actor Russell Crowe, began to play in theaters in Turkey on 26 December 2014 and quickly became one of the most watched films of 2014 in Turkey[i] (it was also successful in Australia and New Zeeland). The film’s play run has almost ended in Turkey (it still plays in one city), but it will soon begin a second run. The film is set to play in theaters, according to a schedule, in many other countries as well.

Set in the year 1919, the film tells the story of Connor, an Australian farmer, who sets out for the Ottoman Empire to find out about what has happened to his sons that had gone off to fight during World War I. Knowing that his sons had fought during the 1915 Battle of Gallipoli (Çanakkale, Turkey), Connor tries to find a way to the former battle site to find clues about his sons. This search sets off a chain of events that leads him to meet Turkish soldiers getting ready to fight for the upcoming Turkish War of Independence.

The film is significant in the sense that it fairly portrays the hardships and suffering endured by all sides during the Battle of Gallipoli. The film shows the massive casualties and the crippling trauma experienced by both Anzac and Turkish soldiers. It also shows the various hardships and suffering Turkish people went through after the end of War War I and the subsequent partitioning of the Ottoman Empire by foreign powers and their proxies. Water Diviner is not so much a war film, but a film set in the aftermath of war. It does not glorify war in any sense, it instead shows just how sorrowful and tragic war is for all people, for all sides who had engaged in the hostilities of war.

It is interesting to note that some Armenian groups[ii] are protesting and calling for the boycott of Water Diviner. These groups are upset because the film does not mention the genocide claims of the Armenians. Yet, this film has nothing to do with Armenians. The Events of 1915 form only a part of a series of many hardships and suffering that ensued during and after World War I. Water Diviner handles a different and specific part of this series of hardships and suffering. Instead of trying to criticize the film in a prejudiced manner, one should try to understand the film for its depiction of the dire situation that resulted from the war.