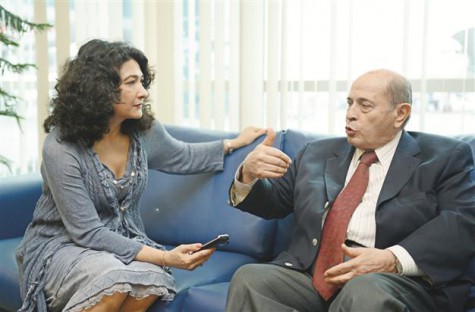 Prime Minister Recep Tayyip Erdoğan’s statement of condolence on the killing of Ottoman Armenians in 1915 represents a major departure from previous official practice, according to a former ambassador. Erdoğan’s move would never have happened just five to 10 years ago, says Ömer Lütem.

The message from Prime Minister Recep Tayyip Erdoğan is unlikely to move militant Armenians, but it is likely to impress the silent majority, says former Ambassador Ömer Lütem (R), adding that Turkey’s government should now wait for a response from Armenians, particularly those in the Republic of Armenia.

The Turkish government’s message of condolence talking about the “shared pain” stemming from the mass killings of Armenians in 1915 is a watershed development that would have been unimaginable in years past, according to former Envoy Ömer Lütem.

“You could not imagine this, let’s say five years ago … 10 years ago, never; 20 years ago, it was unimaginable. There has been a change in the Turkish official position,” he said.

What is your evaluation of the statement?

It is related to the moral side of the Armenian question. First of all, it did not seem to have something related to politics. The moral side or the sentimental side is very important because Armenians really fell some pain.  It could look bizarre, because these events happened a century ago, but as they were repeated every day to them, there is the impression as if they happened recently. So the moral side is extremely important when you say we present our condolences; that we are sharing your pain.  I think it will have an influence on Armenians, but what will result from the political point, that remains to be seen. The militant ones won’t be influenced.  But the silent majority, the majority of the people who are not vocal, but they will be impressed.

Does it mean that it is the first time the Turkish government has shown empathy with the pain you are talking about.

That empathy was expressed with strong words; it was never said like that before. The foreign minister said something similar, but the tone was softer.

Is it the first time Turkey recognized April 24th as a remembrance day?

That is correct; before there was an effort not to notice it, but it was there. Yet officially … I don’t know. They did not put emphasis on recognizing April 24 as the Remembrance Day.

But is it an official recognition that something terrible happened in the past?

They did not put it that way. What is not emphasized is not what happened, but the pain that exists; they are not the same thing.

But after all pain is a consequence of an event; so that is not defined then?

That’s right. I think they did not say that something has happened on purpose. They tried to underline the human aspect of what happened.

What is the importance of the statement?

It is a very important turning point. Though it concerns the humanitarian aspect, it is first time that there has been a display of real empathy towards the Armenians. I have been dealing with the Armenian question for the past 30 years; I have not seen something similar: it is going directly to the people, to their pain, to the people suffering and trying to understand this and presenting condolences; you could not imagine this, let’s say 5 years ago … 10 years ago, never; 20 years ago, it was unimaginable. There is a change in the Turkish official position.

Why do you think it has taken so long?

I think that this government, from the beginning, tried to solve this question. Instead of fighting, arguing with the Armenians, they have been trying to find other ways.  One of the very important elements on the subject was the proposal about the creation of a historical commission.  Before, it was always Armenians saying something, and Turks saying ‘this is not right.’ The government tried another way, but they have not been successful until now.

With the centennial of 1915 approaching, I think the government had the idea to make something that would withdraw the people’s attention, especially the Armenians. I think this is the main cause.

So the Armenians will think their decades-long efforts of recognition are paying off.

Most of them will think that their efforts to convince that what happened is genocide are paying off; but the text of the PM’s message does not give this impression at all.  The message says from the moral point of view, yes we understand your pain, but it did not say anything that can be interpreted as recognition of genocide.

But do you think it was a positive step?

Yes, it is, but I don’t know whether it will be well received or not. But this kind of move takes a rather long time to be accepted; you cannot expect a result in a few days’ time. The government of Armenia did not say much. Most probably they are consulting each other and some countries first, like Russia for instance.

How do you think the Turkish public received it?

In general it was well received. The main opposition party was not against; this is important.  The MHP [Nationalist Movement Party] was against it and that is expected.  The Kurdish party opted to support the Armenian view about three years ago anyway and the AK Party represents above half of the population. I can say that there is not much of strong opposition to that message except from the MHP.

Do you think there is an evolution in the Turkish society’s approach to the issue?

In the beginning, Turkish society was not very much against the Armenians.  First of all people, say they don’t know about the 1915 events. They became angry about these kinds of allegations; they took it as a personal offense. In time, they separated allegations and Armenians in the street. ‘I like my Armenian neighbor,’ they say, ‘but Turks would never commit genocide.’ But the message contains nothing controversial.

Do you think that the strong mandate Erdoğan received from the elections made it easier for him to take this step?

Without having such a big majority, no government would dare take this step.

You said previously that Turkish people were not aware of what happened to the Armenians; so do you think there is now awareness due to Armenians’ genocide recognition efforts?

Armenian terrorism is the main reason for the awareness. They began to shoot Turkish diplomats. And Turkish people were shocked and started asking questions.

What should be done as far as the next steps are concerned?

Turkey has made a great effort; normally, Armenians should respond. And then if there is a positive reaction, then additional steps could come. But if I were in the government, I would rather wait for the reaction from the Armenians, especially in Armenia.

Born in Istanbul in 1933, Ömer Lütem graduated from the Faculty of Political Sciences, University of Ankara in 1957 and became carrier diplomat the same year.  His most important posts have been:

Lütem is the editor of the Review of Armenian Studies, Ermeni Araştırmaları (Armenian Studies) and Uluslararası Suçlar ve Tarih (International Crimes and History).