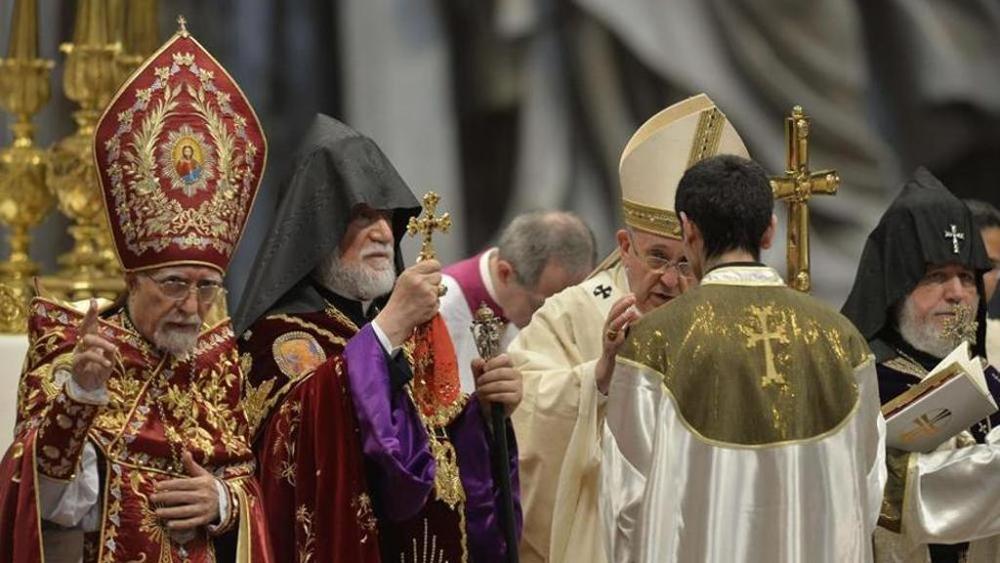 Pope Francis, the spiritual leader of the Roman Catholic Church, will make a visit to Armenia between June 24 and 26.[1] During this visit, the Pope will hold meetings with the leaders of Orthodox and Catholic Armenians and the officials of Armenia. Before the Pope makes this official visit to an Oriental Orthodox country that is Armenia, it is important to bring attention to some points.

In an effort to promote their genocide narrative regarding the 1915 events and to have it recognized, Armenians have, up until now, pursued a strategy involving four pillars (political, historical, legal and religious). In the political sphere, they have lobbied for the passing of (legally non-binding) resolutions and the deliverance of declarations by politicians who stand close to them (and who, by the way, have no real knowledge of the 1915 events). In the historical sphere, they have published many works of dubious academic quality that portray the 1915 events as genocide. In the legal sphere, they have filed for lawsuits against people who oppose their views or on matters that pertain to Turkey. However, despite the fact that 101 years have passed since the 1915 events, Armenians have failed to elevate their genocide narrative to the desired point, and have at times suffered serious setbacks.

In this respect, Armenians have begun to bring forth the element of religion that had, up until now, been kept in the background. The first objective for doing so is to portray the 1915 events as if they had emerged in the context of a clash between Christians and Muslims (when, in fact, these events emerged as a result of the nationalism movements that started to influence the Ottoman Empire during 19th century and onwards). The second objective is to present Armenians as the perpetually and unconditionally victimized “first Christian people” who suffered “the first genocide of the 20th century”, and who are therefore struggling for historical justice (all of these claims are in fact under contention).[2] In this way, Armenians hope to generate sympathy for themselves and gather support from the Christian world for their genocide narrative. Generally speaking, this method has so far been successful.  For example, the world’s largest church association, the World Council of Churches, has been giving unquestioning support to Armenians’ genocide narrative.  Meanwhile, Pope Francis too has unfortunately become a conduit for the propagation of this narrative. Although the Roman Catholic Church has as of lately softened its stance on this narrative,[3] there has been no indication that Pope Francis has changed his personal opinions regarding this issue.

Ever since his appointment to his current position, Pope Francis has had two objectives that he has wanted to accomplish: consolidating the Roman Catholic Church’s standing within the Christian world, and ensuring Christian solidarity (ecumenism) in the world. Sympathizing with Armenians’ genocide narrative is to the benefit of what Pope Francis is trying accomplish, because in this way, the Pope gets to be seen as the moral religious leader who is struggling for the troubles of the “first Christian people”. Indeed, the June 24-26 Armenia visit is being portrayed in a way that reinforces the position that Pope Francis has been able to attain amongst Armenians: it is being expressed that the Pope will make this visit to show his “affection and gratitude” towards Armenia and the Armenian people.[4] Meanwhile, full of gratitude for the interest shown, Armenians are eagerly giving their support to the Pope.[5] In this way, Armenians are giving exactly the kind of support that the Pope seeks to accomplish his objectives. So what has seemingly emerged here is a mutual support borne out of mutual expectations.

It is perfectly appropriate for a Christian religious leader to seek solidarity amongst coreligionists. However, pursuing such a solidarity by utilizing a genocide narrative that portrays Turks as “cruel Muslims” and “immoral denialists”, especially in time when friction between Christians and Muslims is rising, is both very inappropriate and hurtful. Furthermore, in a time when the genocide narrative has taken a blow from the verdicts delivered by a prestigious international court such as the ECHR and the Constitutional Council of France (a country that acts as a flagbearer for the genocide narrative), latching onto the genocide narrative becomes even more problematic. Although it has been indicated that the Pope will not use the term “genocide” during his visit to Armenia, the fact that he will go to the “genocide memorial” in Yerevan can by itself be seen as a message.

We hope that Pope Francis does not make any statements that will overshadow his position and reputation as the spiritual leader of the Roman Catholic Church and that he does not contribute to the intensification of the friction between Christians and Muslims.

[5] Oliver Maskan, “We Armenians, no matter whether Catholic or Orthodox, love the pope”, ACN International, http://news.acn-intl.org/en/we-armenians-no-matter-whether-catholic-or-orthodox-love-the-pope/