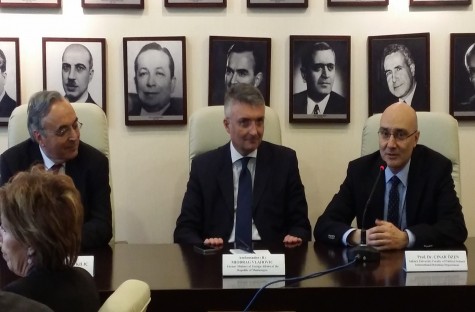 Following the opening speech by Director of AVIM Alev Kılıç, prof. Çınar Özen took the floor. In his introductory speech, Prof. Özen underlined the historical importance of Montenegro and stated that there were 36 representations in the city of Cetinje, once a central city through which Balkan diplomacy was carried out. When current events are taken into consideration, Özen stated, Montenegro has served as a balancer to emerging Slavic and Serbian nationalism, and in the past, again, in the Bulgarian uprising and the Balkan wars. In addition, according to Özen, Montenegro is a critical actor in two important issues: Bosnia Herzegovina and Macedonia. He added that Turkey should be in close cooperation with Montenegro. Following Prof. Özen’s speech, Former Minister of Foreign Affairs of Republic of Montenegro Ambassador (R) Miodrag Vlahovic took the floor.

Former Minister of Foreign Affairs of Republic of Montenegro Ambassador (R) Miodrag Vlahovic, underlined the importance of the referendum that took place in Montenegro followed by the democratic process which has been a smooth transitional period. In addition, Ambassador Vlahovic underlined the importance of the accession process to NATO and EU for Montenegro and touched upon the internal and external discussions taking place in Montenegro. In the questions and answers session, he referred to the internal dynamics and stated that the Western bloc viewed the Balkans as “unfinished business”. While pointing out that accession of the Balkan countries to NATO and the EU is inevitable and necessary, Ambassador Vlahovic presented the cases of those actors either in Montenegro or outside who are for and against NATO membership. He further stated that NATO membership is necessary for peace and democracy in the region.