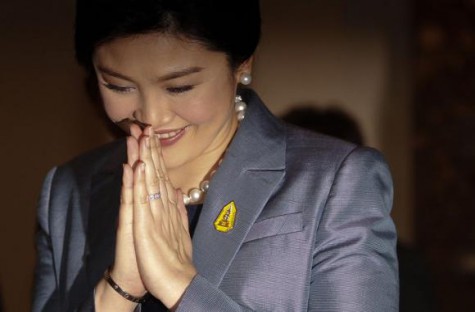 A Thai court found Prime Minister Yingluck Shinawatra guilty of violating the constitution on Wednesday and said she had to step down, throwing the country into further political turmoil, although ministers not implicated in her case can remain in office.

The decision is bound to anger her supporters, but the survival of her government could take the sting out of protests they had planned for the weekend and may make confrontation between pro- and anti-government groups less likely.


Yingluck has faced six months of sometimes deadly protests in the capital, Bangkok, aimed at toppling her government. The anti-government protesters failed to achieve their aim in the street but turned to legal challenges to remove her.

But there appears no end in sight to Thailand's dysfunctional status quo, putting a further strain on the tourism-led economy which could be heading towards a recession, with protesters still pushing for political reform before any new elections are held.

The judge who delivered the verdict said Yingluck had abused her position by transferring the National Security Council chief to another post in 2011 so that a relative could benefit from subsequent job moves.

"The accused was involved in the transfer of Thawil Pliensri from his position as National Security Council head," the judge said, adding that was done in order for Priewpan Damapong, a relative, to "gain a new position".


"The accused acted for her own political benefit ... The transfer wasn't done for the benefit of the country," he added.

Yingluck denied wrongdoing when she appeared in court on Tuesday. She was not present on Wednesday and her spokesman was not immediately available for comment.


Thailand's drawn-out political crisis broadly pits Bangkok's middle class and royalist establishment against the mainly poor, rural supporters of Yingluck and her brother, former premier Thaksin Shinawatra, who was ousted by the military in 2006 and lives in exile abroad to avoid a jail sentence handed down in 2008 for abuse of power.

Yingluck's supporters accuse the Constitutional Court of bias in frequently ruling against governments loyal to Thaksin. In 2008, the court forced two Thaksin-linked prime ministers from office.


Some legal experts had expected the court to remove her entire government. But, instead, it ruled that nine ministers linked to the case should step down but others could remain, leaving Yingluck's ruling party still in charge of a caretaker government.

"We were bracing ourselves for this verdict. Everything our enemies do is to cripple the democratic process," said Jatuporn Prompan, the leader of pro-Shinawatra "red shirt" activists.


"The court chose a middle way today. It could have removed her whole cabinet but they chose to remove her and those ministers responsible for the transfer only," Jatuporn said.

Asked about a vow to resist Yingluck's removal that raised fears of violence between the factions, Jatuporn said: "There is no reason why we should take up arms. We will rally peacefully as planned on May 10."


It remains unclear how a new premier will be appointed. In Thailand the prime minister is normally elected by the lower house of parliament but that was dissolved in December when Yingluck called a snap election to try to defuse the protests.

From that point, she headed a caretaker administration with limited powers. The election in February was disrupted and later declared void by the Constitutional Court.


Yingluck and the Election Commission agreed last week that a new election should be held on July 20 but that date has not been formally approved and it is bound to be opposed again by the opposition.

Thaksin or his loyalists have won every election since 2001 and would be likely to win again.


The former telecoms tycoon won huge support in the north and northeast with pro-poor policies such as cheap healthcare and loans. But his enemies say he is a corrupt crony capitalist who harbours republican sympathies, which he denies.

The anti-government protesters say they want to end Thaksin's influence over politics and are demanding reform of the electoral system before new polls.


A leader of the anti-government protesters, who are based in a central Bangkok park, welcomed the court's decision to remove Yingluck but said their campaign would go on.

"Of course, there is celebration here today but we still have not completed our goals which are reforms and a delayed general election," said Samdin Lertbutr.


"Even though she is gone, they are still the caretaker government," Samdin told Reuters, adding that a big rally on May 14 would go ahead.