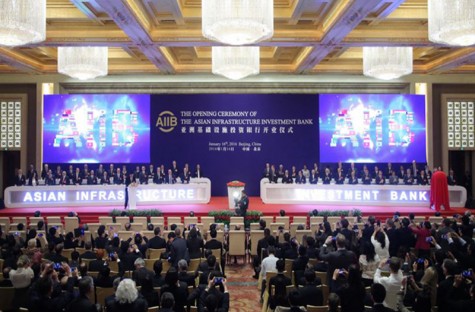 On January 16, 2016, the Asian Infrastructure Investment Bank (AIIB) was declared open for business at the inaugural meeting of the Bank’s Board of Governors held in Beijing, China. Among all member states, Turkey became the 11th largest partner of the AIIB.

The inaugural meeting of the Board of Governors, which was held with the participation of 30 governors from member states including Turkey, also saw the approval of AIIB’s by-laws, rules and codes of conduct. AIIB’s Board of Directors and the first President of the Bank were elected during this meeting. Alongside this meeting, an opening ceremony was held with the participation of Chinese President Xi Jinping and Premier Li Keqiang. AIIB’s Board of Directors, which is responsible for the Bank’s daily operations, also held its first meeting on January 17, 2016.[1]

Asia Infrastructure Investment Bank, which is established under the initiative of China, aims to provide financial assistance for infrastructure projects in Asia. The AIIB focuses on the development of rural and urban infrastructure in different fields, including energy, transportation, logistics, telecommunications, agriculture, etc.[2] AIIB is also seen as a major sponsor of China’s popular Silk Road Project.

Turkey's registered capital is $2.6 billion giving the country a 2.52 percent voting power. This makes Turkey the 11th largest shareholder of the bank. Turkey is also the seventh largest shareholder in its region.[3] Turkey also has a seat in the 12 member AIIB Board of Directors. Turkey will be a ‘Country Group Director’ in the Board of Directors representing Azerbaijan, Georgia, Kyrgyzstan, Pakistan and Brunei.[4]

AIIB provides Turkish businesses important opportunities in Asian countries. Indeed, Mehmet Şimşek, Deputy Prime Minister responsible for economy, speaking on the Turkey’s membership to AIIB, said, that Turkey has become a member of the AIIB in order to improve Turkey's relations with Asian countries, enable the private sector to benefit from financing opportunities the bank has to offer for large infrastructural projects and to take on an active role in regional projects. Stating that the AIIB had the ability to finance large infrastructure projects in Turkey, Şimşek also said that Turkish contracting companies would be able to take an active role in many regional projects, including China's New Silk Road project.[5]

In the recent period, it is becoming apparent that the global balance of power is changing, shifting from the West to the East. The Asia-Pacific region led by China is becoming a global attraction in terms of economy, politics, and military. The East’s growing economies also provides countries an alternative for cooperation in different fields and opportunities for partnership. As a consequence, the West and the East is becoming more integrated.

Constituting a bridge between Europe and Asia and located at the crossroads of the West and the East, Turkey is at the center of the conceptual continent of “Eurasia”, which is becoming more significant with the integration between the East with the West. Cognizant of its unique geopolitical position, Turkey always sought to become both a part and means of the integration between the West and East. Furthermore, Turkey has been trying to adjust its foreign policy to the change in the global balance of power. Therefore, Turkey seeks to pursue a flexible policy between West and the East by looking for opportunities of cooperation in the East. While seeking to positively maintain its relations with the West, having historical and cultural ties with countries along the ancient Silk Road, Turkey is also interested in further developing its relations with Asian countries as well as reaching to the Pacific in economic, cultural, political, commercial fields. AIIB, or in a broader terms, the Silk Road Project promises to be a gateway for Turkey to reach out to Asia and the Pacific in this sense.

[2] “What is the Asian Infrastructure Investment Bank?”, AIIB,  http://www.aiib.org/html/aboutus/AIIB/