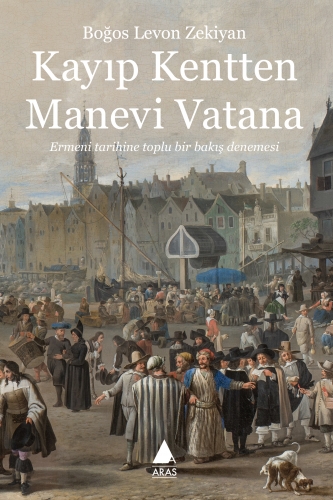 The book titled Kayıp Kentten Manevi Vatana (From the Lost city to the Spiritual Homeland), written by the Archbishop of the Armenian Catholic Church of Istanbul (the spiritual leader of Turkey’s Catholic Armenian community) Professor Boğos Levon Zekiyan, was published during the past months by Aras Yayıncılık. The author of the book Zekiyan, apart from his duty as an archbishop, also serves as the High Representative of the Venice Mekhitarist Congregation and is a well-known Armenologist, philosopher, and theologist.

In this book, Zekiyan (based on the research he has conducted in his academic career focused on philosophy and theology and the experiences he has gained as a religious official) brings light to the roots, identity, and world of thought of the Armenians, emphasizes the special significance of Venice to the Armenians, and lastly, touches upon some of the aspects that influence the Turkish-Armenian relations. As the publisher has stated in the beginning of the book, this book is actually a revised translation of his book in Italian titled L’Armenia e gli armeni – Polis lacerata e patria spirituale: la sfida una sopravvivenza that was a compilation of certain articles that Zekiyan had written between 1981-1996 (for the revised translation, some chapters were removed, and one chapter was added).

In his book, Zekiyan indicates that the history of Armenians dates back to approximately 2500 years and depicts an “Armenia” denoting the lands that Armenians came into existence and lived throughout history. Like many authors that narrate Armenian history, Zekiyan indicates that, apart from some exceptions in history, Armenians -despite all their efforts for their independence- had constantly found themselves caught in between the conflicts of political formations larger than them (Byzantine, Persia, Ottoman, Russia, etc.) and had come under their sphere of influence. But despite all of this, ultimately, Armenians have succeeded in sustaining the Armenian language and their national religion Christianity, both of which have key importance for their identity.

Zekiyan indicates that the Armenians have acquired certain distinct traits within the framework of the difficult geographic conditions in which they lived and their historical experiences. According to Zekiyan, these are among the characteristics that define Armenians: individual and collective entrepreneurship, adventurism, indomitableness, responding fast and swiftly, irritable temperament, and an “almost hereditary repulsion against compromise”.

The entrepreneurship, adventurism, and indomitableness traits of the Armenians that Zekiyan has highlighted have probably played a key role in Armenians spreading across various places in the world. Armenians, known for their affinity for commerce and craftsmanship, had formed both large and small communities in the significant commercial and political centers of the known world and had effectively interacted with and adapted to the native populations of those places.

According to Zekiyan, one of the most important "colonies" that the Armenians have formed in foreign lands is in Venice. To Zekiyan, throughout history, Venice has been one of the most important cultural and commercial centers of Armenians and has allowed Armenians to efficiently meet and intermingle with Western societies. It should be reminded to the readers that the first Armenian printing press in history was established in Venice. The Mekhtarist Congregation represented by Zekiyan is also located in Venice. Although it is a religious organization devoted to Catholic Christianity, throughout history, the Mekhtarist Congregation has served as a very important cultural and educational center for Armenians of every denomination and has contributed to the consolidation of Armenian nationalism.

Based on the experiences of and the situations and conditions encountered by the Armenians throughout the centuries, Zekiyan presents many concepts to the reader and discusses them by spreading them throughout the book. These can be presented as examples of such concepts: immigration, integration, assimilation, diaspora, ghetto, colony, cosmopolitanism, identity, culture, world view/perception of life, state, ecumenism. With such discussion, Zekiyan actually pushes the reader (the individual) to question their relationship with their community, their state, and the world.

In his book, Zekiyan also refers to the factors that influence Turkish-Armenian relations. While Zekiyan does present a narrative that considers the 1915 events as a genocide, he has not made this genocide discourse the main basis of his book. However, the author does include stereotypical aspects of the genocide discourse regarding the 1915 events. It is perhaps not surprising that Zekiyan, by not giving any space to the historical documents (dating back to past centuries) that are no doubt contained in the Vatican’s archives, has adopted the discourse of the Mekhtarist Congregation that puts forth Armenian nationalism. However, by doing so, the author has distanced himself from the objectivity that would be expected of him.

In this book, for example, it is mentioned that the Armenian relocation and resettlement was part of a pre-designed extermination plan, and the European Parliament’s 18 June 1987 genocide resolution is referred to as if this resolution has any kind of validity and bindingness. At the same time, like many Armenian authors neglect to do, Zekiyan has neglected to mention the large-scale violent acts perpetrated by armed revolutionary Armenian gangs before, during and after 1915 and the devastating security dilemma that this violence had created for the Ottoman Empire.

Alongside this, Zekiyan touches upon a salient issue within the context of the genocide discourse. Zekiyan indicates that the members of the Committee of Union and Progress were “educated, cultured” individuals who knew “the principles of life” and “good manners and etiquette”. In this respect Zekiyan questions how such individuals could have been the perpetrators of such “a grim disaster” (he is referring to the 1915 events and the relocation and resettlement of Armenians). When taking into account what he has explained in the other parts of his book, according to Zekiyan, the “genocidal” approach did not originate from the culture of the Ottoman Empire or from its Millet System. Instead, according the author, this approach had originated from the members of the Committee of Union and Progress being influenced by the approaches related to the concept of the nation-state that was emanating from Western countries. In fact, according to the author, there are a number of positive lessons to be derived for today from the Millet System of the Ottoman Empire.

Even though it is not possible for us to agree with some of Zekiyan’s opinions (especially regarding the 1915 events), this book contains interesting information regarding Armenians and Armenianness. It constitutes an important resource for those who wish to receive concise introductory information on the history, identity, and culture of Armenians or for those who are of Armenian descent and wish to read a study with interesting and important evaluations on their own Armenian roots.