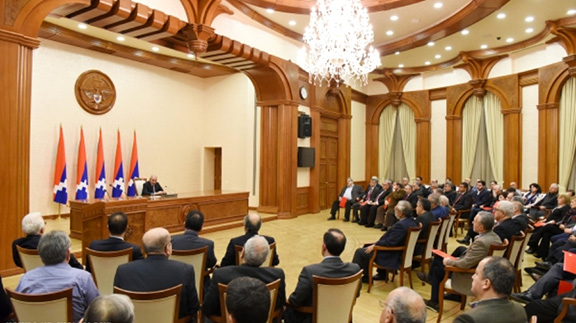 On 16th January Armenian Revolutionary Federation - Dashnaktsoutyun  (ARF) gathered the 33rd World Congress in 128th year of its existence. According to Asbarez 100 delegations and guests from 30 countries participated in this assembly[1]. The illegal nature of this Congress was related to the place it has taken place. 33rd Congress of Dashnaktsoutyun  (ARF) convened in Khankendi, the central city of the occupied Nagorno Karabakh region of Azerbaijan Republic.

In this plenary session, a new Bureau, the highest governing body of the organization and its chairman was elected. Hagop Der-Khachadourian replaced Dashnaktsutyun’s longtime top leader, Hrant Markarian as a new chairman[2].

In the inaguration speech of the World Congress the leader of the so-called “Nagorno Karabakh Republic” (NKR) Bako Sahakian expressed his enjoyment about the saliance of the event firstly by stressing on the venue it has been held. He mentioned that ARF held some activites and meetings in Nagorno Karabakh previously, nevertheless according to Sahakian the meaning of hosting the key political event of the ARF like World Congress seemed incomparable with others. The leader of so-called “NKR” praised ARF for its contribution to Armenia and “NKR” by emphasizing its role as a linkage between Homeland and Diaspora[3].

Furthermore, the role of the party as a protector of the national identity of Armenians all around the world and its inspiration for “patriotic up-bringing of younger generation[4]” were especially stressed by Sahakian. He also expressed greetings to ARF for its input to the settlement of Nagorno Karabakh problem, reinforcement of the “NKR” statehood and the international recognition of “NKR”. Sahakian proudly accentuated that ARF has been playing a key role not only in the “liberation struggle” of NK, but also in its existence for almost three decades[5].

Later on the Bureau Chairman of ARF Hrant Markarian took the stand and indicated his point of view about recent geopolitical challenges that Armenia and so-called “NKR” should confront within the framework of national aspirations. He also reiterated the words of Sahakian about the resolute role of ARF in the fate of so-called republic.

On 24th January the ARF World Congress published an announcement about so-called “NKR”. The announcement has urged the current government in Armenia to sign military-political agreement with the so-called “republic”[6]. In the announcement the readiness of ARF to continue its commitments to the leadership of so-called “NKR” on the “efforts to develop and enhance the country’s socio-economic situation, its security and territorial integrity[7]” was indicated. Moreover, the importance of the “complete participation” of “NKR authorities” in the mediation processes of Nagorno Karabakh conflict was emphasized. As the last point, the continuation of Armenia’s guarantor status in the “independence and security” of so-called republic on the international stage was pointed out in the announcement of ARF World Congress[8].

On the other hand, Markarian touched upon the “Velvet Revolution” in 2018 where Sarkisyan’s government was toppled down by the popular uprising led by the current Prime Minister of Armenia, Pashinyan. The Chairman emphasized his joy of the triumph of people’s will, ousting the corrupt leaders, he mentioned about the challenges that Pashinyan’s government may face[9]. First of all, he indicated that overcoming poverty and advancing social justice in Armenia should be considered as a major duty of the new government. Moreover, he stressed on inexperience of Pashinyan’s government by uttering that without having competence in formulating necessary mechanism of governance they may not be able to eradicate the problems of Armenian people. Therefore, Markarian stated that ARF is concerned of “high risk of amalgamation of the executive and legislative branches and strengthening of one-person rule[10]” in the government that is lack of experience, and have “bad governance and poor cadres[11].”

In the last part of his speech Markarian stated the challenges that ARF has faced in recent times, including the separation of their ways with Pashinyan, and took all criticism to himself. He indicated the inevitability of the “change” and proclaimed that he is not going to put his candidacy as a Bureau Chairman in the elections.

ARF presents itself as an Armenian nationalist socialist political party, founded in Tbilisi, Tsarist Russia in 1890. At its outburst the wider goal of ARF was proclaimed as creating a "free, independent and unified" Armenia, nevertheless its historical background covers a bloody past. Armed movements in Ottoman Empire since the early 1890s, bloody massacres in Baku, Azerbaijan during 31 March - 2 April 1918 are remembered as some samples of Dasnaks’ savagery.

Though time has changed the narrative of Dashnaks, the hatred constructed on Turks has stayed. The aggressive stance of Armenian governments towards Turkey and Azerbaijan after declaring independence of Republic of Armenia in 1991 in terms of Nagorno Karabakh conflict and 1915 events have been especially fuelled and supported by ARF. Therefore, close relations of ARF with Sargsyan’s government that Markarian so enthusiastically criticized in the recent Congress were well known. Within the “long-term political cooperation” ARF had approved designation of Sargsyan as Prime Minister in April, 2018.

This party could not acquire the minimum 5% threshold that was required for parliamentary representation in December, 2018 elections in Armenia. Though it could not retain stable relations with Pashinyan’s government, considering that ministers appointed from ARF to Pashinyan’s cabinet were fired due to the continuing secret collaboration with Sargsyan, the Prime Minister later in the election campaign held in November, 2018 declared his readiness to cooperate with ARF. Pashinyan expressed his hope that ARF “will gain a “young spirit” and come up with “fresh ideas[12]”” after the World Congress. Nevertheless, the statements voiced in the World Congress of ARF proved that “change” in the leadership does not argue to bring serious revisions in the mindset of ARF party nor its followers.

The choice of the venue of the World Congress – the city of Khankendi, within the occupied territories of Azerbaijan Republic, speaks for itself. Dashnaks of 21st century do not hesitate to ignite new flames on the ongoing conflict. The statements of Markarian and the later published announcement about Nagorno Karabakh, the internationally recognized region of Azerbaijan Republic, disclosed that new generation of Dashnaks are in lack of “young spirit and fresh ideas.” Indeed, the advices pointed out for Pashinyan’s government about supporting the general framework of Armenian “interests” in the international society can be evaluated as a warning by ARF. Though, this party is a minor one in Armenia nowadays, ARF’s mindset and influence has stood on the core of Armenian decades-long policies. Therefore, “change” in ARF in particular and in Armenia in general may not come only with the names of political authorities, but it can be achieved through the revision of the mindset that they obstinately insist on to preserve.