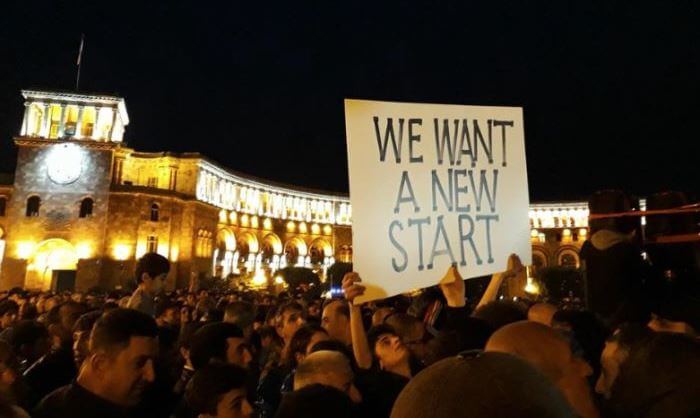 The so-called “velvet revolution” concluding with the peaceful transition of power in Armenia engendered hopes and beliefs about the future of this country both within and without. The “revolution” leader’s promises on fighting against corruption, and the destruction of oligarchic system deteriorating Armenian society from within for decades gained popular support. The nation suffering from bad governance and exploitation of the “Karabakh clan” backed the new actor on the Armenian political scene known with his more democratic, liberal, Western-prone and anti-Russian dependence stance.

At the earlier stages of the “Velvet Revolution” the articles published in AVIM[1] touched upon some possible reactions expected to be given by Pashinyan’s government to the major problems related to Armenia’s international affairs. The articles argued that rhetoric change in Armenia does not simply mean any efficient transformation in the political discourse, unless it influences foreign policy.

Considering that a real change in the country’s domestic policy should be reflected on its foreign affairs, the current article aims to find out the dimension of the “potential” transformation anticipated in Armenia by evaluating the approach of the new Armenian government to the Nagorno Karabakh conflict.

“Where will the new government’s foreign policy lead?” was the major question asked by the international society after the governmental change. The “Elk” bloc known with radical criticism on the economic dependence on Russia saw the lack of the bargaining power of this land-locked country as the main problem. The background of Pashinyan as a journalist detained for his democratic appeals in the riots against Russian-backed Sarkissian regime increased his popularity. Pashinyan in the protests fearlessly revealed his views about the dissatisfaction in the country which emerged as a result of the Russian reliance leading the country into the isolation. These points brought up hopes for the possibility of geopolitical transitions hindering the regional cooperation because of the decades-lasting Armenian aggression.

Nevertheless, when the Armenian riots started to be considered seriously Pashinyan reiterated on various stages that the existing strategic partnership with Russia will continue and Armenia will not leave the Eurasian Economic Union, as he once mentioned. On the other side of the coin, Russia supported the “Velvet Revolution”, as against the previous patterns of “Colored Revolutions” in Georgia and Ukraine.

Pashinyan completely revised his remarks related to Russia as he became the head of the government, but apparently there is no difference in his stance about Nagorno Karabakh conflict differently from the previous governments that brings us to the conclusion that the political discourse ongoing in Armenia is the same even after the so-called “Revolution”. Conversely, he does not even apply any diplomatic softening to his rhetoric about Nagorno Karabakh, amply used by his predecessors.

The major source of Armenian regional isolation feeding its economic backwardness which in turn triggers problems domestically is the unresolved Nagorno Karabakh conflict. That’s why it is important to know Pashinyan’s viewpoints about the issue in order to comprehend better why the foreign policy of Armenia is not going to be influenced by the effects of the “Revolution”. Or conversely, there would not be any discussions about the Revolution in Armenia unless it affects the Nagorno Karabakh issue salvaging the state from the decades-long isolation. Let’s see how Pashinyan’s government insists on sticking in the Nagorno Karabakh problem.

How does Pashinyan stick in Nagorno Karabakh problem?

The Nagorno Karabakh has been the most important issue on the agenda of both Azerbaijan and Armenia for the last three decades. Hopes risen as a result of the governmental change in Armenia expected to positively influence the solution of the conflict disappeared quickly as Pashinyan revealed his viewpoints on Nagorno Karabakh issue. As Thomas de Waal emphasized, Pashinyan seems like someone from the crowd, rather than a politician or a diplomat interested in finding a way out to the unresolved conflict[2].  Surprisingly enough, Pashinyan’s stance on Nagorno Karabakh can be evaluated as rigid as the previous governments. With a fear of appearing as a weak leader in the eyes of the Armenian society following two Karabakh “veteran” leaders Pashinyan raised his voice about the Karabakh issue. Moreover, he intended to evade the belief that any leader who lack of the direct links with this region would not be able to provide security. As regards the statements and actions of Pashinyan, one can say that he is trying to build the image of a strongman on Nagorno Karabakh by asserting his national security credentials. This indicates an unchanged posture of the “revised” government on this problem.

The article argues that Pashinyan’s stance towards Nagorno Karabakh stays unaltered since his time in political opposition, while his attitudes toward Russia were reconstructed after coming to power. The Prime Minister of Armenia was always aggressive toward Nagorno Karabakh issue. In his radio interview in 2016 Pashinyan stressed that “there is no land to hand over to Azerbaijan[3]”. He stated that “the territory we hold is significant to our survival as a country[4]” by referring to seven regions of Azerbaijan surrounding Nagorno Karabakh under the Armenian occupation.

On the following day of his designation as the new Prime Minister, Pashinyan visited Nagorno Karabakh[5]. During this visit Pashinyan touched upon three major points that clarified the position of the new government as regards the occupied region.

Pashinyan firstly underlined the importance of linking the separatist regime of Nagorno Karabakh to the negotiations table. He indicated that as the Armenian government they cannot present interests of the Nagorno Karabakh Armenians, arguing that as PM of Armenia he may represent merely the interests of Republic of Armenia in the negotiations, although new government will maintain its commitments to the “security” of Nagorno Karabakh. The Armenian Prime Minister repeated this approach at various platforms. On the 7th June, Pashinyan addressed the Parliament with the similar remarks:

Before coming to Armenia Robert Kocharyan was the elected “president” of Karabakh, and Serzh Sargsyan was one of the organizers of the “Nagorno-Karabakh Republic’s” self-defense movement. Therefore, they could have had the mandate of negotiating on behalf of Karabakh. But I can’t do the same. I can’t attribute the right of negotiating on behalf of Karabakh to me even with my greatest desire, because there are no legal, political and moral grounds for it. The people of Karabakh do not take part in elections in Armenia, instead they have their own government, and they can be represented only by their representatives having the lawful and legitimate grounds of doing so[6].

Second issue stressed by Pashinyan in his visit to Nagorno Karabakh on 9th May was similar with the previous governments which was a warning to Azerbaijani side. Condemning Azerbaijani government for her usage of militaristic rhetoric, Pashinyan urged that in such circumstances any dialogue to reach a consensus may be pointless and unattainable. Paradoxically, such peaceful appeals started to raise suspicions of Pashinyan’s statement about sending his son to do his military service in Nagorno Karabakh[7].

The final point stated by Pashinyan is related to the most debatable and unresolved issue on the negotiations table - the self-determination of Karabakh Armenians. He stressed that mutual concessions may be achieved only after bringing clarifications to this question. Indeed Azerbaijani side unequivocally clarified this point by indicating that “holding negotiations with occupant Armenia for over 25 years is Azerbaijan's biggest compromise[8]”.

Even a tougher approach to Nagorno Karabakh was displayed by Pashinyan, when he defined this region “as an inseparable part[9]” of Armenia. All efforts of the Armenians to persuade the international society about non-interference of Armenia in the “choice of policies” of the separatist regime in Nagorno Karabakh sunk with Pashinyan’s intention to transform de-facto fact into de-jure through such remarks. This kind of pivot change on the rhetoric used by Pashinyan in the rallies of “Velvet Revolution” reminded the “Miacum” agenda, the unionist idea which encouraged the separatist movement in Karabakh but ended up with destructive consequences between 1988 and 1991[10]. Not only the revitalization of “Miacum” ideology, but also thwarting the idea of Nagorno Karabakh as an independent state which was utilized for covering the Armenian political discourse for almost three decades are detected in Pashinyan’s rhetoric. It seems that if the new government of Armenia insists on this position in Nagorno Karabakh, the future of the negotiations may end up with deadlock thereby killing few hopes about the peaceful solution of the conflict.

The revolution leading to “deadlock”

The promises of the leader of protests in Armenia just over a month ago turned into the stagnant policies held for years by different politicians. It is too early to evaluate the consequences of the “Velvet Revolution”. Nonetheless, the first emotions it engenders are the exaggerated expectations that could not be realized by the current government of Pashinyan.

Pashinyan’s rhetoric change in terms of Russia is somehow understandable considering the Russian influence in Armenia. Rescuing from the Russian chains all domains of Armenian society seems unattainable, nevertheless the new government in Armenia may be more forthcoming in terms of Nagorno Karabakh conflict. The popular support acquired by the promises on solving the internal problems may vanish very soon when the society perceives the inefficiencies of the new government. Pashinyan’s government should understand as soon as possible that the success in the internal domain is directly related to its performance in foreign affairs. There is one way out of the current isolated position of Armenia – and it is a new approach on Nagorno Karabakh problem. Otherwise, the fragile position of the ostensible democracy emerging with ephemeral revisions after the Revolution may be shattered by not only political rivals, but also by pressures coming from a society feeling deceived.