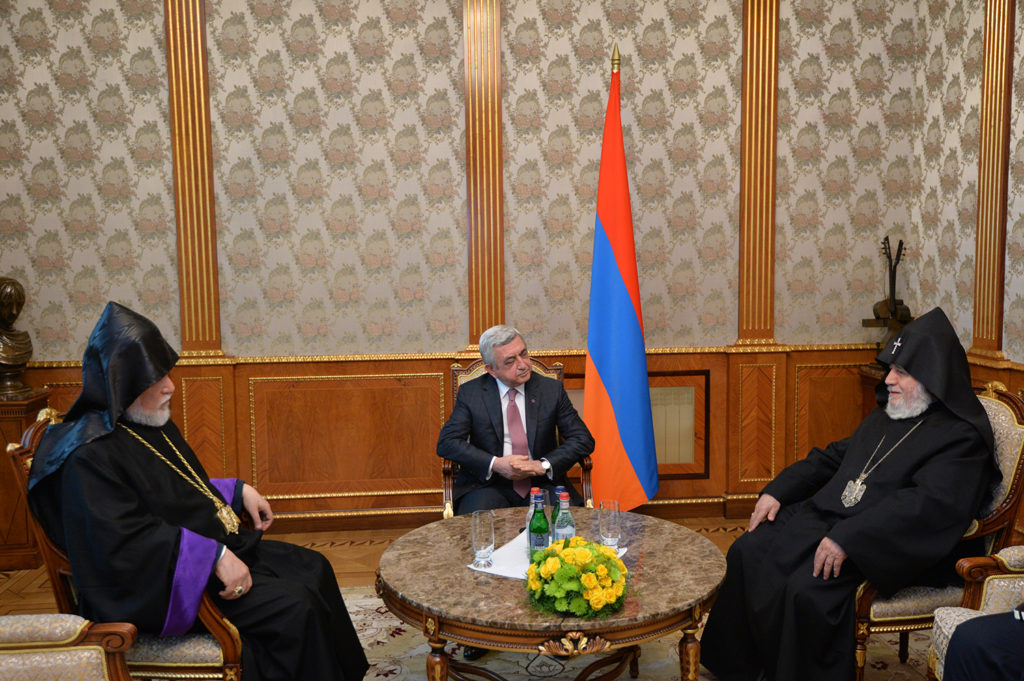 The “Velvet Revolution” in Armenia continues with its ripple effects in various fields of the Armenian society even after two months. People suffering from the decades-long oligarchic system containing favoritism and nepotism ruled by the authoritarian government linked their hopes to the new cabinet of Pashinyan. With the confidence that the “change” is possible from the streets, Armenian people continued their struggle with all “old structures” causing miseries. One recent target is the Armenian Apostolic Church, or more precisely its supreme leader, Catholichos of all Armenians, Karekin II.

According to the news piece published in AGOS[1] the people in Erivan rose up against the Armenian Catholicos who has a controversial public image. On the 6th June people including priests gathering under “New Armenia, New Pontiff” initiative demanded the urgent resignation and replacement of Karekin II via holding new Catholicosate elections. The people utilized “New Armenia, New Patriarch”, “Free and independent Holy Mother See”, “Go out Karekin” slogans in the riots[2]. Subsequently, the protestors were invited to the Holy Mother See of the Etchmiadzin for discussing their demands with Karekin II, bishops and their fellows. Nevertheless, directly after the meeting with the rally participants, the Catholicosate stated that the supreme leader is not going to resign. As a consequence, the Assembly of Patriarchs of the Armenian Apostolic Church gathered for the evaluation of the existing situation. They once again repeated that the resignation of Karekin II due to the external suppression is impossible:

The ultimatum approach adopted, directed to the Catholicos of All Armenians, to raise concerns is unacceptable. The class of bishops, as the prime guarantor of the Armenian Church’s charter protocols and the inviolability of the Catholicos of All Armenians, stipulates that the demand for the Catholicos’ resignation, now being pushed forward through external and violent intervention, is anti-canonical and thus invalid. We understand our obligations regarding the future of the Church and the need to continue reforms in the life of the Church corresponding to modern-day life[3].

The people dissatisfied with this decision continued their protests in central Erivan. “New Armenia, New Pontiff” initiative stated that they are going to continue the protests up until the resignation of the Catholichos.

The contradiction around the Armenian Apostolic Church is not a new thing and have deep roots in the history. Some reports and articles published in AVIM[4] already analyzed this issue from different perspectives. Thus, this paper by referring to the ongoing dissatisfaction towards the Catholicos of all Armenians would like to illuminate the historical background holding causes of the frustration against Karekin II. In this regard, the separation of Armenian Apostolic Church, its relations with Diaspora and the allegations against Karekin II will be analyzed. For better apprehension of the reason why the revolutionary wave could not pass by Etchmiadzin, political linkages of the current Catholicos with the previous governmental members need to be recalled. Also relevant is the question why the Armenian media, even after the Revolution kept its silence during these protests against the Catholicos personally.

Armenian Apostolic Church is unique in itself because of conveying nationalistic features. Differently from other churches it does not have any universal discourse and is considered synonymous with Orthodox Armenian people. Being Armenian is directly related to the affiliation to the Apostolic Church, regarding that 94.7% of the population is Apostolic Christians. There are four branches of this church in various parts of the world:

Though there is some competition among the branches, Mother See of Etchmiadzin maintains its supremacy as being a church of all Armenians. In the period of Soviet Union when worshipping was considered as a crime Mother See of Etchmiadzin had lost its previous significance, opening a door for independent activities of the Diaspora Armenians starting to establish their own churches in their states of inhabitance. After the collapse of the USSR the situation has changed, the Catholicosate of Etchmiadzin reestablishing itself to regain the previous influence[6]. In order to expand impact, the Mother See of Etchmiadzin started to send bishops to different parts of the world where Armenians live. This engendered a confrontation between the Armenian communities abroad and the Church. The Diaspora Churches with their own regulatory systems developed within decades became concerned from the interference of the bishops sent from Etchmiadzin unaware of the local cultures[7].

On the other hand, the Mother See of Etchmiadzin aimed to gather the financial resources of all Churches under its control and it also triggered dissatisfaction. Though Aram I, the Catholicos of the Holy See of Cilicia stated that there is no fragmentation in the Church, by indicating that Armenia has “one Church, one nation and one goal[8]”, there were apparent appeals about the need for the renovation of the Mother See of Etchmiadzin.

Two approaches related to the actions of the Church were drawn. Some, especially the Diaspora was critical about the interventionist, old-fashioned style of governance of the church. The Diaspora demanded the enhancement of transparency, democracy and the application of Western values to the works of the Church. The others who support the motto of “Let’s not wash our dirty laundry in public[9]” accused the proponents of the innovations for contributing to the fragmentation of the Church. This traditional and authoritarian mindset was widespread among the Armenians living in Armenia, nonetheless the recent events showed that the number of the people thinking in this manner is gradually decreasing.

The disjunction between the innovative and traditionalist values around the Armenian Apostolic Church strengthened in the period of Karekin II who openly declared that Armenian and Western values are incompatible together. Besides his tough traditionalist demeanors towards the Church, there are other features of Karekin II’s image leading to the controversies. There have been several allegations against him. However, it is not our intention to touch upon this controversial side of his life[10].

Regarding the significance of the Christianity in the Armenian identity, the reaction of the Catholicos of All Armenians in the political, economic and societal developments of Armenia is acknowledged influential. Resentment towards the Supreme Religious leader increased when he neglected to condemn the fraud presidential elections of Sargsyan ending up with the protests. The image of Karekin II was shattered once again with his inappropriate comment like “people will satisfy their hunger through spiritual values[11]” to the question why the Church continues to build the countless numbers of churches while Armenian people suffer from poverty and hunger.

The Armenians targeting a change with their “Velvet Revolution” seem disenchanted with their supreme religious leader and demand the substitution like the old political authority. That’s why the protests against the Armenian Catholicos should not be surprising. His attitude during the Pashinyan’s protests was also criticized because of the support given to Sargsyan regime until the last day of his resignation. On the 20th April, in the last meeting with Sargsyan, Karekin II, as well as Aram I congratulated the former Prime Minister while wishing him “fortitude, strength, patience, and endurance[12].” By calling the people in the streets to the order, indeed these religious figures did not hesitate from apparently disclosing their political closeness to the government. Not surprisingly, “New Armenia, New Pontiff” initiative claims that they are not going to halt protests till achieving the replacement of the Patriarch. With the hopes arisen for “new Armenia” after Pashinyan’s victory it seems that Armenians are tenacious in their will of “change” in the spiritual authority too. As one of the clergymen participated in the riots said:

Our dear prime minister was receiving great love and respect at Sardarapat. I looked for our patriarch, at his side, and saw a man, with his staff, that had the appearance of a rejected man. I found it very sad[13].

On the other side of the coin, according to AGOS[14] on the question whether the newly designated Prime Minister Nikol Pashinyan will intervene to the situation occurring around the Church, the PM answered that because of the secularity of Armenian Republic and the separation of the state and the Church he is not going to get involved with the confrontation between the people and the Church.

Another significant issue related to the protests against the Patriarch that should be mentioned is the silence of the Armenian media. By stressing the salience of the religion in the Armenian society once again, this silence is intriguing.

Irrespective of the non-interference of the political authority and the denial of the Armenian media towards the riots against Karekin II, the struggle of Armenians to achieve the change in the spiritual platform is likely to continue. It remains to be seen how far the resentment against the Supreme Leader of All Armenians, Karekin II will go.

[12] "Sarkisian Meets with Catholicoi amid Ongoing Protests Calling for His Removal." The Armenian Weekly. April 20, 2018. https://armenianweekly.com/2018/04/20/sarkisian-meets-with-catholicoi/.