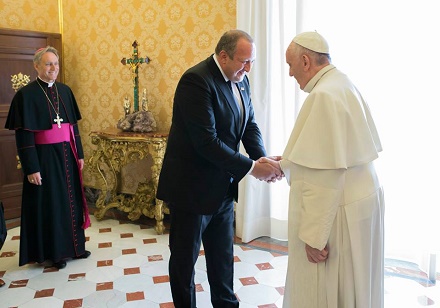 It has been announced that Pope Francis, the spiritual leader of Roman Catholic Church and head of state of Vatican City, will visit Georgia and Azerbaijan respectively between September 30 and October 2. According to announcement from the Vatican, the Pope will visit Georgia at the invitation of Ilia II (Patriarch of the Georgian Orthodox Church) and also civil and religious authorities.[1] This will be the second visit of a pope to Georgia after the visit of Pope John Paul II in 1999. As such, this visit will be a significant meeting for the Georgian state and the Georgian Orthodox Church as well as for the Pope. The Georgian state expressed the importance of this development as follows:

The Vatican plays an important role in international relations and this is state relations with which is particularly important for us regarding promoting Georgia in the Catholic world and supporting the non-recognition policy of the occupied regions.[2]

Before this announcement, the President of Georgia Giorgi Margvelashvili and Pope Francis held a meeting at the Vatican in April 2015 and evaluated the current situation of Georgia and the general outlook of the region.  As was mentioned by the Georgian state, the Vatican plays a significant role in terms of international relations thanks to its sphere of influence created through religious ties. Georgia expects that good relations with the Vatican will contribute to the developing of relations between Georgia and the European Union (EU). According to information from the Commission of the European Union, there is an important commercial treaty that was signed in 2014 between the EU and Georgia and this treaty is addressed to expand the two sides’ market reach and to increase foreign investment in Georgia.[3] As it can be remembered, the Vatican maintains the position that the EU is a community of Christian values, and in this regard, the visit of the Pope to Georgia also carries importance in terms of improving the political and economic relations between Georgia and the EU.

After the meeting in April 2015, President Margvelashvilli summed up the meeting between him and Pope with these words; “… We discussed the current situation and the difficulties that follow the Georgian-European choice and the future role Georgia has to play in resolving the problems in the region, …”[4] As can be understood from statement of Margvelashvili, in the meeting, the two leaders put emphasis on three points: recent politics issues, regional problems, and also relations between church and state.

As it is known, the Christian world has been a experiencing divisions amongst itself for centuries because of theological disputes. Since the very beginning of his tenure, Pope Francis has endeavored to eradicate such divisions. For example, his visit to Armenia and his statements regarding the 1915 events are indicators that Pope Francis has been behaving in accordance with his aim of achieving ecumenism.[5] At the same time, the Pope has demonstrated his desire for ecumenism with his meetings with other countries’ religious representatives. Apparently, one of the principal reasons of Pope Francis’ visit to Georgia is his aim for ecumenism. The demographic structure of Georgia is dominated by Orthodox Christians, while Catholic Christians make up 0.8% of the population.[6] In other words, although the population of Catholic people in Georgia is far less than the population of Orthodox people, Pope Francis, as the head of state of Vatican City and the spiritual leader of the Roman Catholic Church, decided to add Georgia among his visits in line with his wish to gather all Christians under a single roof by eradicating theological disputes between them and to improve his Church’s relations with Orthodox denomination of Christianity.

Moreover, in a statement issued last November, Georgia had mentioned the historical relations between the Vatican and Georgia, and had emphasized Georgia’s willingness to construct good relations with the Vatican.[7] That is why, together with political developments, the Pope’s visit to Georgia will be a significant opportunity in terms of furthering ecumenism for the Pope who is keen on ecumenism. Even though this situation is a positive development in terms of the Christian world, it may produce objectionable results in respect to leading to statements confusing religious affairs with state affairs, as was the case during the Pope’s visit to Armenia.

A point that must be pondered on is the following; Will Pope Francis, who carelessly made a statement about a controversial historical issue during his visit to Armenia, make a statement about another controversial issue, namely Georgia’s Abkhazia and South Ossetia regions? Even though both of these regions legally belong to Georgia, they have de facto separated from Georgia and have declared their independence. This situation leads to deep grievances in Georgia and its continuation severely overshadows Georgia-Russia relations.  As it can be understood from Georgia’s statement mentioned at the beginning of this article, Georgia is in the expectation that Pope Francis will mention this issue during his visit to Georgia. Will Pope Francis, who attributes importance to having good relations with the Russian Orthodox Church and has close relations with its spiritual leader Patriarch Krill, be able to make calls upon Russia regarding this issue?

To sum up after this reminder, Pope Francis’ visit to Georgia between September 30 and October 2 will be highly important in terms of Pope’s aim for a united Christian world fragmented for many years due to theological disputes, in terms of Georgia’s contemporary political issues, and also in terms of Georgia relations with the EU.

We hope that during his visit to Georgia, Pope Francis can demonstrate an objective attitude by avoiding single-sided narratives on historical and political issues in contrast to the way he behaved during his visit to Armenia in accordance with his push for ecumenism.

Pope Francis’ visit to Azerbaijan will be the topic for another article.

* Photo: Agenda.ge (President of Georgia Giorgi Margvelashvili and Pope Francis together during President Margvelashvili’s visit to the Vatican on 10 April 2015)