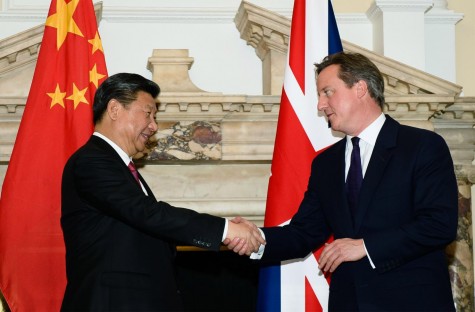 Chinese President Xi Jinping visited the UK between the dates 20-23 October. It was the first state visit by a Chinese head of state to the UK in 10 years. Hailed as the beginning of a “golden era” of China-UK relations, the visit came a week after Chancellor George Osborne’s visit to China.

Throughout the visit, both President Xi Jinping and Prime Minister David Cameron emphasized the importance of bilateral ties and furthering diplomatic and economic relations. They also announced their willingness to work in partnership on the global issues such as climate change and tackling poverty.

Also a UK-China Joint Statement on building a global comprehensive strategic partnership for the 21st Century was issued which hailed President Xi Jinping’s as the opening of a golden era in China-UK relations featuring enduring, inclusive and win-win cooperation, and announced that two sides will enhance trade and investment as well as political trust based on equality and mutual respect.[1]

The state visit saw the signing of trade and investment deals worth up to 40 billion pounds (62 million dollars). The most talked about aspect of the deal was the 6 billion pound investment by China regarding Hinkley Point nuclear power plant, which is the first major Chinese investment in a Western nuclear facility.[2] Also both sides signed numerous commercial deals spanning a range of sectors such as automotive, tourism, energy, health, technology, financial services, and education.

Overall, despite a setback in relations due to Prime Minister Cameron’s meeting with the Dalai Lama in 2012, China and the UK have been enjoying good relations. In recent years, investment and business cooperation between China and Britain has grown rapidly. Britain has become the European Union (EU)'s second largest investor in China as well as China's second largest trading partner and investment destination in the EU, while China has become Britain's second largest non-EU trading partner. In 2014, China-Britain trade volume for the first time exceeded 80 billion dollars.[3]

During the visit, both parties discussed the possibility of establishing a UK–China infrastructure alliance. In connection with this, both sides announced their interest in cooperating on each other’s major infrastructure initiatives, namely China’s “Belt and Road” initiative (Silk Road) and UK’s Northern Powerhouse.

China’s interest in the UK could be considered in line with China’s recent focus to Europe within the context of its “Belt and Road” Initiative. The initiative aims to revive the ancient Silk Road to enhance trade with Europe and Asia, and to extend China’s influence in those regions. In relation to these aims, China has been recently trying to increase its economic presence in Europe and has been seeking investment opportunities within the EU.

China’s involvement in Europe and the momentum in its relations with the UK is also partly motivated by the recent formation of the US and Japan-led Trans-Pacific Partnership agreement (TPP). China is currently excluded from the TPP, leaving the country exposed to potential economic isolation in the Asia-Pacific region. Therefore, China’s recent efforts could be seen as a way to counter economic losses for being excluded from the TPP and balance US and Japan’s influence by improving relationships in Europe, in this case with the UK.

To this end, China seems to prefer the UK to stay in the EU.  As it is known, Britain is considering leaving the EU, which it joined in 1973, and is planning a referendum in 2017 to decide whether or not the United Kingdom should remain in the EU. During his visit, Xi Jinping is reported as saying: "China hopes to see a prosperous Europe and a united EU, and hopes Britain, as an important member of the EU, can play an even more positive and constructive role in promoting the deepening development of China-EU ties."[4] It is understood that China wants the UK to use its position within the EU to facilitate better relations between China and EU. In fact, the UK is known for being an active supporter of a free trade agreement between China and the EU.

On the other hand, the UK’s promotion of close relations with China, the second largest economy in the world, seems to be motivated by economic reasons. Britain seeks to further trade relations with China and attract Chinese investment to boost its economy and fund its infrastructure development. For instance, the UK secured Chinese investment for its Northern Powerhouse Project, which aims to boost the economic growth in the North of England.

In connection with this, it also appears that the UK is also interested to become a part of China’s Belt and Road Initiative as it provides potential opportunities for British business in both Europe and Asia as well as investments in Britain. In relation to this, it should be noted that the UK, in March 2015, became the first major Western country to join the China-led Asian Infrastructure Investment Bank (AIIB).

Chancellor Osborne’s statement that the UK wants to become China’s ‘best partner in the West’[5] and the announced intention to align the Northern Powerhouse Project with the Belt and Road Initiative perhaps suggests UK being the westernmost part of China’s modern Silk Road.

Ultimately, UK’s warm approach to Xi Jinping during his visit displays UK’s willingness to seize the economic opportunities provided by close relations with China. This willingness is also not limited to the UK. Hollande’s and Merkel’s recent visit to China also demonstrates that other European economies, despite their political differences, are determined to develop close economic relations with the emerging global power China.