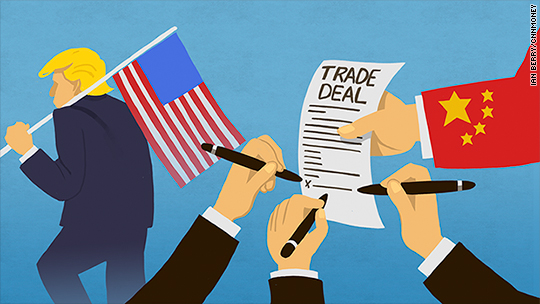 After his inauguration on 20 January, US President Donald Trump, who previously had criticized the Trans-Pacific Partnership (TPP) and stated during his election campaign that he would reject the agreement once he took office, did not lose any time in keeping his word. On 23 January, President Trump signed the executive order formally withdrawing the United States from the TPP.

The Trans-Pacific Partnership Agreement, which has been deemed as the largest regional trade agreement ever, is a regional free-trade agreement between 12 Pacific Rim states, which includes US, Australia, Brunei Darussalam, Canada, Chile, Japan, Malaysia, Mexico, New Zealand, Peru, Singapore and Vietnam. These countries together represent nearly 40 percent of global GDP, a population of 800 million people, and around one third of world trade. The agreement intended to deepen economic ties between these nations by reducing tariffs and trade barriers. It also set rules on different topics such as intellectual property, resolution of trade disputes. After more than five years of negotiations, the final form of the TPP was signed on 4 February 2016 in Auckland, New Zealand, and awaited ratification by all signatories to enter into force.

The TPP, which was brokered by former US President Obama, was commonly considered as part of a broader US strategy to increase American influence in Asia, to contain and counter-balance China’s growing economic and political power and influence, and to set the rules of trade in the Asia-Pacific region before China. Therefore, the deal did not include China, the world’s second largest economy and a key component of the Asia-Pacific region, as well as Russia, another rival of the US that borders the Pacific Ocean.

The agreement’s fate was mostly sealed before Trump’s recent move. The deal, which was criticized in the US for favoring big business and other countries and reducing jobs and wages, was opposed by both the Republican and Democratic presidential candidates during the electoral period. Furthermore, the Congress had not yet ratified the deal and hopes for the deal’s approval by the Congress were weak. To take effect, the deal would have had to be ratified by February 2018 by at least six of the 12 countries that represent 85% of the combined GDP of all 12 members. The US’s ratification would be necessary to fulfill the 85% requirement.

President Trump’s decision to withdraw from the agreement was met with disappointment by other TPP members. In Japan, which had just recently ratified the TPP (on 20 January) and thus become the first - and ultimately the only country- to ratify the deal, Deputy Chief Cabinet Secretary Koichi Hagiuda, referring to a previous comment by Prime Minister Shinzo Abe, stated that the TPP without the US would be ‘meaningless’. Hagiuda said that “the fundamental balance of interests is lost without the US”, and added that Japan was not thinking about an action between the remaining 11 countries.[1]

On the other hand, Australian Prime Minister Malcolm Turnbull, expressing that he was still hopeful that the US policy could change in the future, pointed out that there is also the opportunity for the TPP to proceed without the United States”. Furthermore, he added that there is the potential for China to join the TPP. Australia’s Trade Minister Steve Ciobo also said that there were talks for a possible TPP minus the United States, or a new TPP that include countries such as China and Indonesia.[2]

New Zealand Prime Minister Bill English commented that the United States was ceding influence to China and the region's focus could switch to alternative trade deals. He is reported as saying, "We've got this RCEP agreement with Southeast Asia, which up until now has been on a bit of a slow burn, but we might find the political will for that to pick up if TPP isn't going to proceed.”[3] Malaysia is also reported to be focusing more on the RCEP after Trump’s move.[4]

The RCEP (Regional Comprehensive Economic Partnership), which is regarded as an alternative to the TPP, is a proposed free trade agreement which is composed of the 10 member states of the Association of Southeast Asian Nations (ASEAN) and six states with which ASEAN has existing free trade agreements. The RCEP does not include the US, but involves seven TPP signatories as well as China.[5] The RCEP countries make up 46% of the global population and are worth 24% of global GDP.[6]

Ultimately, the TPP now appears to be dead in its current form. The remaining members of the TPP can either amend the TPP or draft a new deal similar to TPP that excludes the United States and include other countries such as China. As mentioned above, there is also some interest towards the RCEP. Therefore, RCEP, which includes China, could also replace the TPP.

However, one thing is clear: Trump’s decision to leave the TPP will benefit China in boosting its clout in the Asia-Pacific region. TPP, commonly seen as the pillar of Obama administration’s pivot to Asia, also was an instrument to contain China. With the TPP gone, at least for now, China, will be more active in the region and likely become the center of interest for the countries in the region. In the light of Chinese President Xi Jinping’s statements promoting globalization and free-trade at the World Economic Forum in Davos on 17 January,[7] China, which is the world's top exporter and heavily dependent on free trade, will take advantage of the US’s absence and try to set the rules of trade in the Asia-Pacific. Meanwhile, Russia, which has been filling the void in the Middle-East after Obama’s focus towards East Asia, can also emerge as a winner in the Pacific in this coming period after the shelving of the TPP that include the US.