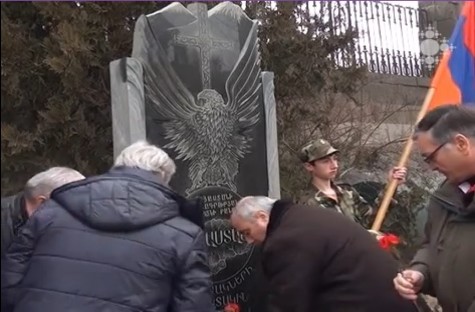 There are a number of long-running obstacles standing in the way of the normalization of relations between Turkey and Armenia. Among these, the ones that stand out are Armenia’s vague stance on recognizing the territorial integrity of Turkey, its insistence on trying to impose the “Armenian genocide” narrative on Turkey, and its continuing occupation of Azerbaijan’s Nagorno-Karabakh territory.

Alongside these obstacles, there is an issue that continues to cause tension between the two countries and block society-to-society reconciliation. This issue is the continuing treatment of the members of Armenian terrorist organizations -who killed Turkish diplomats- as national heroes, and the erection of statues and memorials in their name.

These statues and memorials serve as a concrete example for the fact that, far from the combatting of terrorism, in reality there is in Armenia a solidified veneration of terrorists.

For example, in Armenia’s capital Yerevan, there is a bust for Monte Melkonian, who was one of the leading figures of the Armenian terrorist organization ASALA that targeted Turkish diplomats. From the perspective of people of Armenia, Melkonian is a national hero for having killed Turkish diplomats for Armenians’ “righteous struggle” against the Turks, and also for having taken part in the Nagorno-Karabakh War. He is buried in the Yerablur military cemetery located in the outskirts of Yerevan.

In this cemetery, there is also a memorial erected in honor of ASALA. In other words, a memorial was erected in a military cemetery in Armenia in the name of the members of a terrorist group that killed the diplomats of a neighboring country (Turkey). This is a very concrete proof of the positive way in which ASALA is viewed in Armenia.

Therefore, the question that has to be asked is the following: How can Turkey compromise, and then reconcile with a country (and its society and church) that derives contentment from the killing of Turkish diplomats and which still venerates those who have done the killings?