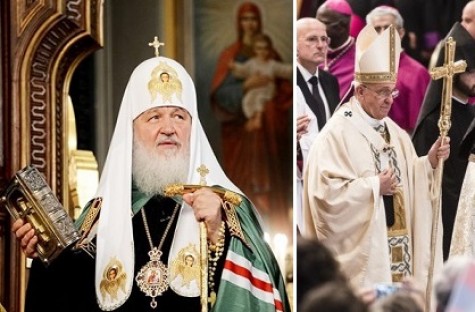 Patriarch Kirill of Moscow and All Russia, head of the Moscow Patriarchate (commonly referred as the “Russian Orthodox Church”), recently made some comments regarding relations between Christians and Muslims during the Ottoman Empire. During an interview for the Rossiya TV channel, Patriarch Kirill spoke of the current hardships experienced by Christians in the volatile Iraq and Syria. He then gave the Ottoman Empire as a positive example for Christian-Muslim relations, stating: “Nothing similar to the current events [referring to the hardships] had ever happened in the Islamic world. Take, for example, the Turkish, Ottoman Empire. Yes, there were Christian minorities there but they were not exterminated.”[1] He continued by stating that the Ottoman Empire enacted laws that “imposed order, [and] ensured relative security and stability in the lives of religious minorities.”[2]

These remarks have caused an uproar in Armenia and in the Armenian community around the world. It is easy to understand why these remarks have upset Armenians so much; they basically go completely against the Armenian narrative of Ottoman history. Armenians claim that their ancestors had been subject to frequent persecution by the Ottoman Empire because of their Christian identity, and that their ancestors were targeted by the Ottoman state in a systemic extermination campaign. Obviously, Patriarch Kirill’s remarks fly in the face of both of these claims.

As such, many Armenians have accused Patriarch Kirill of glossing over their genocide narrative regarding 1915, some even accusing him of “slapping them in the face”. Patriarch Kirill’s spokesperson responded to the criticisms coming from Armenians by attempting to give a context for the Patriarch’s remarks. The spokesperson indicated that the Patriarchate’s support for Armenians’ genocide narrative remained unchanged, adding: “Position [regarding the genocide narrative] of the Russian Church remains invariable. We always protected that position transparently and publicly in international, inter-Christian and inter­religious platforms and will continue to do that”.[3] The context given by the spokesperson, however, did not in any way refute the Patriarch’s words or change their meaning. An interesting side note is that the spokesperson’s explanation was delivered only to the Armenian press, and not the Russian press.[4]

Patriarch Kirill is known to be a highly educated and intelligent man. The words of wisdom emanating from such an eminent personality deserve particular reckoning. Since he also has close ties with President of Russia Vladimir Putin, there have even been claims that this is Russia’s way of achieving a breakthrough in the Russia-Turkey stalemate over the downing of the Russian warplane. However, this is the subject of another commentary.

What is important here is that the remarks of Patriarch Kirill, one of the prominent leaders of the Christian world, offer a stark contrast to Pope Francis’ recent behavior regarding the interpretation of history. Since April 2015, Pope Francis has been stubbornly clinging to the Armenian genocide narrative. His remarks on this issue have revealed that he lacks a proper understanding of what the term genocide connotes.[5] His conduct has also revealed double standards: he chooses to highlight the suffering of Christians while ignoring the suffering of Muslims in the same historical context.[6] In an effort to increase Christian solidarity and further elevate the standing of the Roman Catholic Church in the Christian world, Pope Francis has resorted to using a genocide narrative that is in essence based on misinformation and distortion, and meant to demonize the “Muslim Turk”. His current behavior has achieved nothing constructive in terms of fostering Christian-Muslim dialogue in these tense times (one only has to look at what is happening in the US and the EU), and in fact has done the exact opposite. It seems that he is adamant about pursuing this harmful course, as there are persistent rumors emanating from Yerevan that he is planning to visit Armenia on 24 April 2016 to take part in the remembrance ceremonies.[7]

Pope Francis would be well advised to look into Patriarch Kirill’s historical approach to this issue, which reflects the historical realities and facts, rather than indulging in Turcophobic and Islamophobic propaganda. While Pope Francis’ biased approach offers nothing constructive in terms of reconciliation, Patriarch Kirill’s approach offers us a promising way to move forward in forging better understanding between the adherents of two of the world’s largest religions.