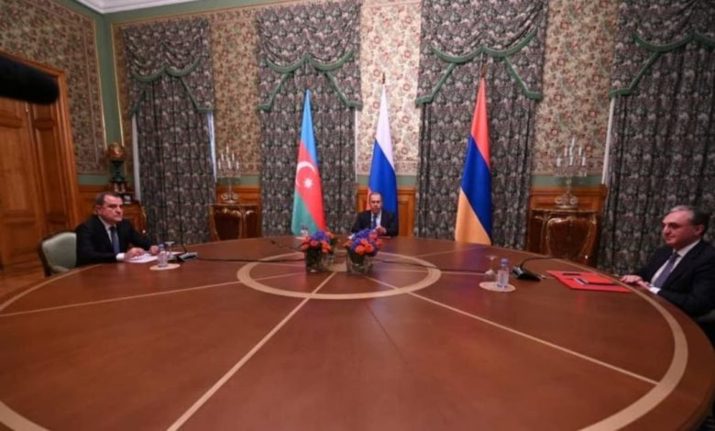 The latest clashes between Armenia and Azerbaijan erupted on 27 September 2020. On 8 October, Russia invited the ministers of foreign affairs of Armenia and Azerbaijan to Moscow on 9 October to negotiate a ceasefire. In the night connecting 9 October to 10 October, a ceasefire protocol to take effect on 10 October at 12 pm composed of four articles was signed by the sides. The signed protocol is as follows:

1. A ceasefire is declared from 12:00 pm on October 10, 2020 for humanitarian purposes for the exchange of prisoners of war and other detained persons and bodies of the dead, mediated and in accordance with the criteria of the International Committee of the Red Cross.

2. The specific parameters of the ceasefire regime will be agreed upon additionally.

3. The Republic of Azerbaijan and the Republic of Armenia, with the mediation of the OSCE Minsk Group co-chairs, on the basis of the basic principles of the settlement, are starting substantive negotiations with the aim of achieving a peaceful settlement as soon as possible.

4. The parties confirm the invariability of the format of the negotiation process [emphases added]."

As seen in the third article, the next step is envisioned to be the revitalization of the peace process under the auspices of the OSCE Minsk Group. Yet, the ‘peace process’ has been idle for long years. The OSCE Minsk Group’s collective and its co-chairs individual records are far from being assuring with respect to the prospect of successful conduct of that process. Therefore, whether the OSCE Minsk Group and its co-chairs will adopt a new conducive approach will be an important factor for the success of the desired new peace process. If they continue with their habitual modus operandi, the prospect of achieving peaceful resolution of the conflict after the recent clashes would be quite unlikely.

In fact at this critical moment, it is the right time to review the records of these actors and the current state of the OSCE Minsk Group to understand the mistakes and fallacies of these actors. Such an understanding may help to bring an end to the vicious circle and to achieve a breakthrough in the ‘peace process.’

France as the Partisan ‘Mediator’

The recent escalation once again revealed that France is no fit to be a mediator between Armenia and Azerbaijan for its partisan sympathy to Armenia, or worse antipathy to Azerbaijan. Since 27 September, France has been displaying its unbalanced and unfair support to Armenia without any constraint. Furthermore, France has been acting like that from the beginning. It should be crystal clear to all that such a country cannot make any contribution to the ‘peace process.’ Moreover, France with its incomprehensible approach is an obstacle against the peaceful resolution of the Karabakh conflict.

It should be remembered that France’s inclusion in the peace process as a co-chair had been a controversial process back in 1997. That time, Azerbaijan objected the co-chairmanship of France. However, Azerbaijan’s objection fell on deaf ears and France laid its hands on the co-chairmanship of the OSCE Minsk Group. In order to appease Azerbaijan, the US was included in the co-chairmanship in the same year. As a result of this process, France, Russia and the US became the three co-chairs of the OSCE Minsk Process.  Overall, a major mistake by including France in the peace process had been made some twenty three years ago and today we are still encountering the consequences of this mistake.

Russia and the Business as Usual

France is one of the biggest obstacles in the long-delayed success of the OSCE Minsk Group. There is no doubt that it will continue to be so. Yet, Russia’s approach to the conflict and the ‘peace process’ should also be mentioned as another hurdle. Much has been said about Russia’s utilization of the ‘protracted conflicts’ in the post-Soviet space. There is almost a unanimous opinion that Russia has been exploiting these conflicts for its own geopolitical objectives. Instead of helping to resolve them, Russia often times induces their prolongation. The sale of Russian arms to Armenia and Azerbaijan, with a lower rate to the former, is a definitive proof of Russia’s unconducive approach as a mediator of peace. It should also be highlighted that Russia is to a great extent accountable for the instability in the Wider Black Sea region for its occupation and illegal annexation of Crimea and support to the separatists in Eastern Ukraine. Certainly, there is not much need to mention Abkhazia and South Ossetia, as these cases are more than well-known.

The US, the Disinterested Mediator

Certainly, the US had its own ‘geopolitical’ reasons while engaging in the OSCE Mink Group’s Karabakh peace process. The prospect of carrying the hydrocarbon resources in the Caspian Sea to Europe, a vision developed in early 1990’s, which became the basis of the projects generally discussed under the banner of ‘Southern Gas Corridor,’ and the launch of the ‘war on terrorism’ after the 9/11 attacks had been the main reasons of the US interest in the region and the Karabakh conflict, in specific. As a result, The US revised its pro-Armenian bias starting from mid-1990, a process which is exemplified by the lifting of the Section 907 of the Freedom Support Act of 1992, in 2002. Yet as its foreign policy priorities changed over time, the US’ interest in the South Caucasus gradually diminished. The reaction of the US to the recent escalation is telling in this sense. Whereas France assumed a vociferous and disgraceful pro-Armenian position and Russia more calmly waited for the right time to step in, the US adopted a particularly low profile stance.

Russia Moving Ahead of the OSCE Minsk Group

Since early 1990’s, Russia has been aiming to be the primary third actor within the context of the Karabakh conflict. Obviously, this is because of Russia’s geopolitical objectives rather than its love of peace and stability in its neighborhood. Russia’s ambitions had even become a reason of competition between itself and the OSCE Minsk Group, which it co-chairs. This competition was quite visible in 1990’s. In fact, the 1994 Bishkek Protocol with which a fragile ceasefire was achieved is a good example of that competition. On 5 May 1994, by Russia’s unilateral initiative sidelining the OSCE Minsk Group, Azerbaijan and Armenia signed the Protocol in the presence of the representatives of Nagorno-Karabakh Armenians, and the Commonwealth of Independent States. Between June 2008 and the end of January 2012, the then Russian President Dmitry Medvedev led the ‘Kazan process,’ though that time with the consent of France and the US. Presently, Russia’s role as the lead of the ‘peace process’ has been de facto accepted by Armenia, Azerbaijan, two other co-chairs of the OSCE Minsk Group and the international community. This situation, however, gives Russia a free hand in manipulating the ‘peace process’ in pursuit of its own agenda.

The outbreak of the large scale clashes between Armenia and Azerbaijan caused huge sufferings on both sides. Yet, this dreadful development was by no means unanticipated for the fact that not the conflict but the ‘peace process’ has been frozen for more than a decade. Armenia has opportunistically utilized this impasse to consolidate, normalize and dictate the de facto situation in Karabakh and the surrounding occupied territories of Azerbaijan. In fact, Armenia has been more than contended with the halt of the ‘peace process.’

Despite its regretful humanitarian consequences, the recent clashes may help to end this unfair, unlawful, and in the long-run unsustainable state by forcing Armenia to turn to meaningful negotiations and activating, this time, a genuine peace process unlike the travesty ‘peace process’ that has been carried out under the auspices of the OSCE Minsk Group for almost three decades. However, in order this to materialize, the new process should be qualitatively different from the previous one.

Particularly, the biased approach of France should be reviewed and condemned. In fact, a revision in the co-chairmanship of the OSCE Minsk Group should be discussed. Likewise, Russia’s conduct should be scrutinized and mechanisms to counterweight Russia should be developed. The increased US weight in the OSCE Minsk Group may provide this sort of a counterweight. Having said that, it should also be kept in mind that increased US involvement may turn the Karabakh conflict into another arena of competition between Russia and the US. Obviously, this would not result in any positive developments. Increased and formal involvement of the regional countries that are affected by the ongoing conflict in the mediation efforts may be a balancing factor in that sense and also help to reach a lasting and fair peace beneficial to all. This alternative should also be considered seriously.