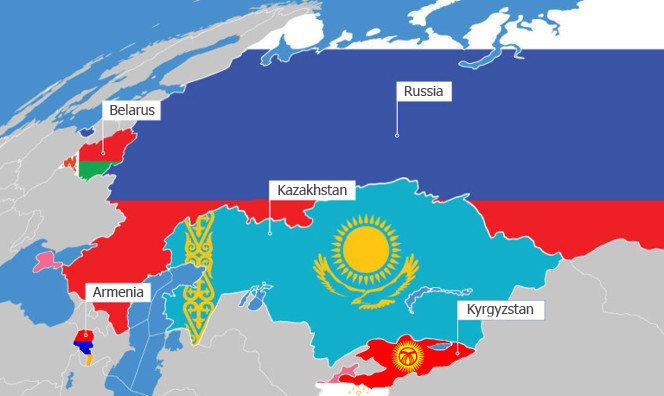 Those who want to inflict a blow on Turkey in international politics generally act in the framework of the European Union. Armenia is one of the states that follow this path. In 2014, while Armenia and the European Union (EU) were about to sign an agreement for strengthened partnership and cooperation, Armenia directed itself towards Eurasian Economic Union under the influence of Russia. Armenia signed the membership agreement with the Eurasian Economic Union in 2014. This agreement entered force in January 2015. It is possible to say that a similar approach of Armenia is on the agenda today for the North Atlantic Treaty Organization (NATO) and the Collective Security Treaty Organization (CSTO).

The Eurasian Economic Union is an agreement signed on 29 May 2014 by Belarus, Kazakhstan, and Russia. This treaty was signed in order to cooperate in political and economic issues. Armenia was included in the Eurasian Economic Union on 9 October 2014. Armenia aims to increase the real income and employment rate of its people by participating in this union[1]. In other words, Armenia is at the same time one of the founding members of Eurasian Economic Union. It should be noted that the process of Armenia's inclusion in the Eurasian Economic Union is an interesting process. As a matter of fact, in 2013 Armenia returned from the verge of signing an agreement with the EU. The waived agreement covered partnership and free trade agreement. However, Armenia preferred to be a part of the Eurasian Economic Union instead of signing this agreement at the Vilnius Summit. It is possible to say that Armenia is directly dependent on Russia in the fields of energy and military, and on political matters. Despite its small economy, Armenia as a country is important for Russia. Russia’s military bases in Armenia, Armenia’s close location to Turkey and the Middle East,[2] and Russian support on the side of Armenia[3] on the Nagorno-Karabakh issue give the answers why Russia gives importance to Armenia.

Nowadays, negotiations between Armenia and the EU on 'strengthened partnership and cooperation agreement' has concluded, and in May 2017 the agreement with the EU is expected to be signed. When asked why Armenia was abandoning its agreement with the EU in 2013, Armenian President Serzh Sargsyan said that both sides were well-intentioned, that there were no different points from the previous agreement, and there no contradiction with the Eurasian Economic Union in economic matters would be experienced.[4] As Sarkisian stated, contrary to what was being thought at the time, Russia was not an impediment towards joining the EU and that Armenia was comfortable with this issue. Moreover, it does not prevent them from joining the EU. Sarkisian stated that, in the future, he thought that these two Unions could talk about a possible cooperation. Even if Sarkisian expressed that Russia was not influential during the signing stage with the EU, Hovhannes Igityan, the Director of the European Union Chamber of Commerce in Armenia, said that, in 2013 Armenia would be involved in free trade that open the doors of Europe to the producers in the country. He also stated that Russia did not force Armenia, but threatened Armenia by signing energy and arms agreements with Azerbaijan[5]. Despite Armenia's scrapping of the signing of an agreement with the EU, the EU's foreign ministers, who emphasized the importance of visa exemption for Georgian and Ukrainian citizens towards the end of 2016, also have on their the agenda the deregulation of the visa application from Armenia.[6]

Regarding whether they are considering cooperation with NATO, Armenian President Sargsyan said he had met with NATO Secretary General and invited him to Yerevan. He also expressed that this cooperation would not create conflict with the alliance with Russia. As CSTO member Armenia's conflict with Azerbaijan continues, Armenia's negotiations with NATO, as President Sarkisyan pointed out, also draw attention. While Sarkisyan has stated that this cooperation is not contradictory, it is also known that in early April 2015, Armenian military units conducted joint exercises with NATO troops.[7] Although CSTO is defined as a deterrent military alliance with no specific enemy, it is common knowledge that it is an organization founded to balance NATO's strength. Although Armenia is in favor of an individual cooperation with NATO, the deadlocked relationship between Armenia and NATO member Turkey and NATO partner Azerbaijan (whose territory is under invasion by Armenia) causes damage to regional cooperation and stability.[8]

In comparison to other CSTO member states cooperating with NATO, Armenia’s military cooperation with NATO is more comprehensive.

Just as it was about to sign an agreement with the EU, Armenia chose to become a member of the Eurasian Economic Union. However, Armenia now says that it will sign a strengthened partnership and cooperation agreement with the EU in May 2017. It seems that Armenia aims to establish a 'balance politics'. With this approach, Armenia acts as if aiming to show that Armenia is an indispensable country that sends friendly signals towards both the East and the West, and that it can switch sides at whim. Armenia’s approach displayed towards international organizations, which is in the aspect of its goal towards economic and military development,  ends up creating uncertainty in regional stability and cooperation initiatives.