THE SPEECH OF ARMENIA’S PRESIDENT AT THE PARLIAMENTARY ASSEMBLY OF COUNCIL OF EUROPE
Commentary No : 2018 / 3
Tutku DİLAVER
06.02.2018
4 min read 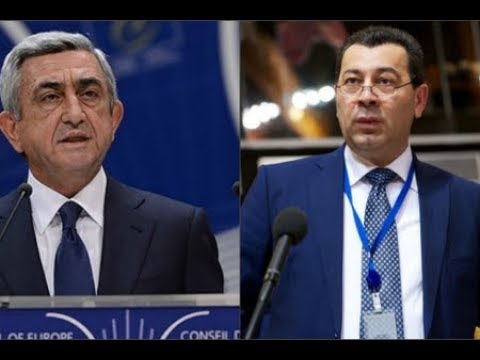 Serj Sarkisian, the President of Armenia, gave a speech at Parliamentary Assembly of Council of Europe (PACE) on January 25. Sarkisian’s speech which included issues like Turkey-Armenia Relations and the solution of Nagorno Karabakh conflict reveals the dynamics of traditional Armenian politics once again. [1]

In his speech, Sarkisian made some statements about the Nagorno-Karabakh conflict and stated that the time has come for a solution. However, he continued his attitude to ignore the violation of Azerbaijan’s territorial integrity and wanted PACE to support this illegal occupation which continued in favor of Armenia. [2]

In question and answer session after the speech, Azerbaijan MP Samad Seyidov reminded Sarkisian of Khojaly Massacre  and pointed out that he hadn't gave a place to that in his speech. In response to Seyidov, Sarkisian stated that he thought there was a trend in Azerbaijan to want whatever the Armenians had had. Sarkisian ended his by asking “Why do you need to call something that never occurred and was never carried out by the Armenians a ‘genocide’?”.[3]  Sarkisian's reply shows how Armenia's attitude is far from being constructive towards resolving the Nagorno-Karabakh problem, and it also shows that the rulers of Armenia have chosen to ignore and deny all the issues that do not fit their own interests.

The Khojaly Massacre which is characterized as genocide by Azerbaijan is one of the greatest tragedies in the history of Azerbaijan. On the night of February 25th, 613 Azerbaijani civilians including 83 children were killed in an the attack organized by Armenian forces at Khojaly village of Azerbaijan and 487 people were heavily injured. Sarkisian, who stated that he participated in the "struggle of Nagorno Karabakh" in his speech in AKPM, was the commander  of the defense army of Nagorno-Karabakh between 1989 and 1993.   In 1994 when Khojaly massacre took place, Sarkisian was serving as the Defense Minister of Armenia.[4] In a report prepared by Human Rights Watch on Nagorno-Karabakh, the role of the Armenian and Russian militias in the massacre is clearly displayed.[5] On the other hand, Thomas de Waal's interview with Sarkisian which has been cited many times before reveals the ideas of Sarkisian about the Khojaly massacre. Sarkisian didn’t deny that Armenian militia was behind the murder of Azerbaijani civillians at Khojaly. In addition, He stated that Khojaly massacre was a good example to show Azerbaijanis how serious Armenia was on the Nagorno Karabakh issue. In light of these, Sarkisian’s words in the PACE that the time has come for the solution of the problem are far from being persuasive. Obviously, Sarkisian wants to cover up his personal responsibility on the Khojaly Massacre and wants to legitimize this massacre and the ongoing occupation in international community.

In response to genocide allegation of the head of Azerbaijan’s PACE delegation, Sarkisian stated that there is no decision by international organization or UN that there was a massacre in Khojaly. In fact, UN resolutions numbered 822, 853, 874 and 884 which were adopted during the Nagorno-Karabakh War confirms that Armenia and the Armenian forces were actual aggressor and occupant.[6] Despite these UN resolutions, Armenia still continues its attacks on Azerbaijani territories, harm civilians and displace them, and continues to occupy Nagorno-Karabakh and 7 district  around it. Contrary to what Sarkisian said, the conditions the Azerbaijanis faced during the Nagorno-Karabakh war went beyond the war conditions. While Sarkisian avoids commenting on this massacre, in which he has a personal responsibility and which took place before the eyes of the entire world and is documented by all of its proofs, he can nevertheless still advance his unfounded claims about the events of 1915which is claimed to have taken place a hundred years ago without any proofs, documents or perpetrators. This situation shows how these hypocritical attitudes of the Armenian leaders who govern Armenia, have in fact become Armenian State policy. It is not possible for Armenia to find any peaceful solutions under the rule of these leaders who had committed crimes against humanity.