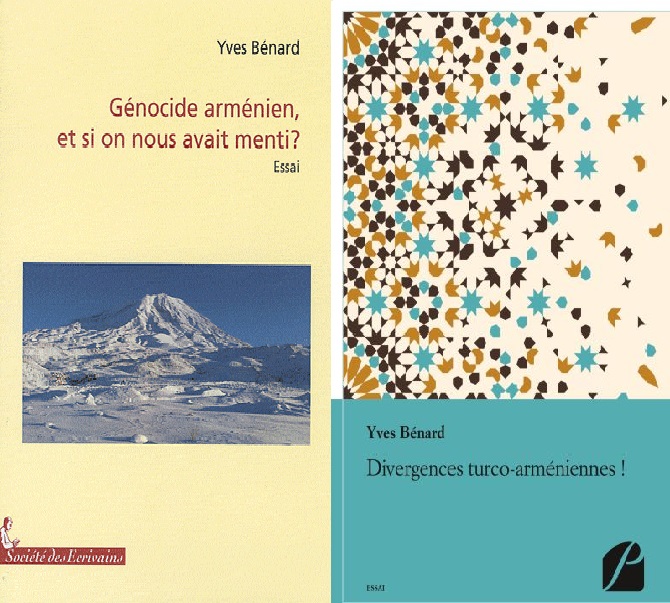 The Armenian diaspora, which has been spread throughout the world since 1878, has since that time increased its influence in many cities such as Paris, Boston, Cairo, Aleppo, Beirut, and Los Angeles.[1] The so-called Armenian Genocide has been told through various media and politicians in each country where the Armenian diaspora is effective, and international support has been sought in this push to publicize the said claims of genocide. At this point, it would be appropriate to note here a sentence from the "Attention" section of Yves Benard's book titled Genocide Armenien, et si on nous avait menti? (En. The Armenian Genocide: And if They had Lied to Us?) published by Société des Ecrivains (En. Society of Authors) in 2009: “It is particularly difficult for someone who has only followed the French press and politicians during his/her life to claim that Armenians have not suffered genocide by Turks”.[2]

Having witnessed the distress of his Turkish friends after the French Parliament’s decision for recognizing events of 1915 as genocide in 2001,[3] Benard began to pursue the answer to the question; “and if they had lied to us?” Having listened to what Armenian militias had done in the township of Bayburt from his friends, which ran counter to what he knew about the so-called Armenian Genocide, Yves Benard began writing his book by investigating the other side of the story.

First of all, Benard’s book is remarkable for constituting a questioning of the claims of Armenian genocide by a French citizen. The author -noting that he is not a historian- wanted to share his insights with his readers from what he had learned through a literature review.

Benard sent his book to 45 publishing houses in France, and received the same negative reply from all of them. In his interview with Turquie News in France, he told that a great majority of the French public opinion saw the Ottoman Empire guilty with regard to the Armenian question, and for this reason, he thought that no one wanted to publish this book.[4] Moreover, five months after publishing his book, on 20 April 2009, Société des Ecrivains decided to unilaterally revoke the contract with Benard on the grounds that his “… claims refuting the Armenian Genocide cannot be defended in France”. This attitude exhibited in France, i.e. in a country that is called the cradle of human rights, freedom, and democracy, has led to question marks being raised in people’s minds. In 2017, Benard gathered his work under a different title, Divergences turco-armeniennes, which was published by Les Editions du Pantheon.

During his research for the book, Benard accessed the statistics on the Armenian population living in the Ottoman Empire between 1905 and 1914. He indicates that the Armenian population in the Ottoman Empire was only around 1,193,600 between those dates. For this reason, he relays to his readers that the claims that 1,500,000 Armenians died from genocide are unsubstantiated. Noting that he does not overlook the large number of Armenians who lost their lives under war conditions, Benard indicates that the number of Turks who lost their lives during the war were also substantial.[5]

Mentioning terrorist groups founded by Armenians before, during, and after the war, Benard gives information about the assassinations and the rebellions in the Ottoman Empire that those groups were involved in. He shares with his readers that it was the Hunchak and Dashnak parties who were behind the Yıldız Assassination attempt, and the Zeytun, Sasun, and Van insurrections. The events that took place in the framework of the Relocation and Resettlement Law put into effect by the Ottoman government are relayed to the readers via quotes from the journals and official correspondences of the witnesses.[6]

Lastly, Benard gives place to a chronological list of terrorist attacks perpetrated by ASALA (Armenian Secret Army for the Liberation of Armenia) and JCAG (Justice Commandos of the Armenian Genocide) between 1973 and 1986.[7]

Yves Benard’s book is significant for reminding its readers to look at the other side of the coin. In order to fully understand the 1915 events, it is necessary to not only look at the propaganda of the Armenian Diaspora, but also to consider all the relevant scientific research. This is precisely why Benard’s work has great significance in terms of challenging the dogmas of the pro-Armenian narratives.