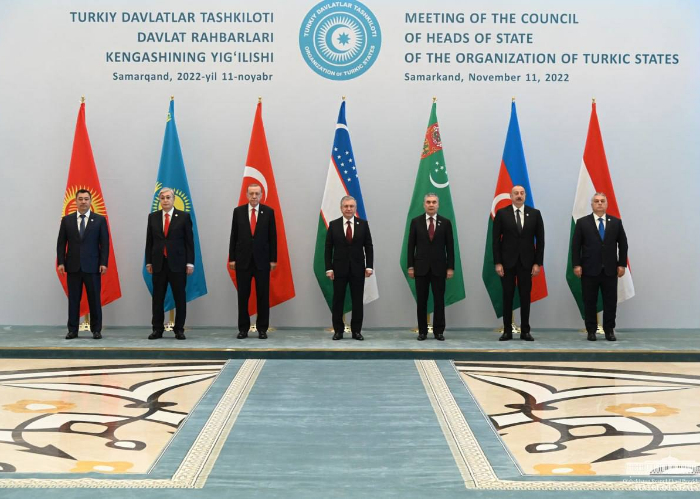 This is the English translation of a Turkish language article that was originally published by AVİM on 21 November 2022.

The Samarkand summit of the Organization of Turkic States (OTS) was held on November 11, 2022 with the participation of the heads of the member states Azerbaijan, Kazakhstan, Kyrgyzstan, Uzbekistan and Türkiye, as well as the participants from the observer states, the Prime Minister of Hungary and the President of the National Council of Turkmenistan, and the Secretary General of the OTS. At the summit organized under the theme of “New Era for the Turkic Civilization: Towards Common Development and Prosperity”, the activities carried out last year on the issues of political, foreign policy, security issues, economic and sectoral cooperation, people to people cooperation, institutional cooperation and cooperation with external parties were discussed and the Document titled “Organization of Turkic States Strategy for 2022-2026”, which is the 5-year implementation guide of the “Turkic World Vision-2040”, was accepted.

Since the restructuring of the Cooperation Council of Turkic Speaking States as the "Organization of Turkic States" (TDT) in November 2021, it can be seen there has been an increased effort towards the goal of the organization to play a larger role in various fields, especially in regional politics, economy, and security. In this direction, the heads of states expressed at the summit that they issued instructions towards the continuation of security consultations within the OTS on a regular basis and called for closer cooperation in the field of defense industry and military collaboration.[1] The heads of state expressed their deep concern regarding the dire economic and humanitarian situation in Afghanistan, and called for strengthening efforts to provide humanitarian assistance to Afghanistan. It was reported that the initiative to establish a permanent dialogue with the authorities of Afghanistan titled High-Level International Negotiating Group on Afghanistan was welcomed.

A series of agreements and protocols have been signed with the aim of ensuring the commercial integration of the region. In order to develop transportation on the east-west route that has been encouraged by the risks arising from Russia's attacks against Ukraine, a “Trade Facilitation Strategy Paper” was adopted to develop transportation and expedite clearance of goods across the borders of the OTS Member States, and an agreement on international combined freight transport was signed for the simplification and harmonization of trade and customs procedures. The President of Kazakhstan emphasized that border crossing points should be modernized, and alternative routes of railway and automobile communication should be developed to further expand transit and export opportunities.[2] The importance of digitalization of border and customs procedures was also noted in the summit declaration.  In this direction, the "e-Permit" pilot project launched between Turkey and Uzbekistan and the digital TIR pilot project launched between Kazakhstan, Kyrgyzstan, and Uzbekistan have come to the fore. Discussions on the Free Trade Agreement on Services and Investment are ongoing, and it has been reported that preparations have been made to finalize the Digital Economy Partnership Agreement among the OTS Member States before the next OTS Summit. Cooperation in the field of tourism, the development of the green economy, and the proposal to establish a Green Finance Council[3] to expand the capital market in this area were the other issues discussed for the economic and sectoral cooperation.

One of the most important issues of the OTS Samarkand Summit that the summit declaration includes the decision regarding the admission of the Turkish Republic of Northern Cyprus (TRNC) to the Organization of Turkish States as an observer member. The fact that the TRNC has been officially accepted as an observer member means that it is represented in an international organization for the first time. This could be a step that will encourage the TRNC to be recognized by the OTC member states in the future. Just as the OTC supported Azerbaijan's restoration of its sovereignty and territorial integrity, the recognition of the TRNC would indicate that OTC member states will increasingly act as a univocal group.

[1] Samarkand Declaration of the Ninth Summit of the Organization of Turkic States, https://www.turkkon.org/assets/pdf/haberler/samarkand-declaration-2679-165.pdf