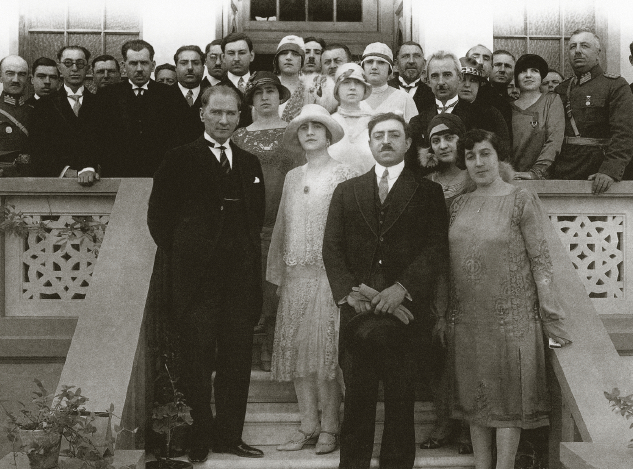 With the Turkish-Afghan Friendship and Cooperation Treaty signed in 1921, Afghanistan became the second state to recognize the Turkish Grand National Assembly and the National Oath of 1920. The Ankara Government opened its second foreign representation in Kabul, after Baku. A Turkish officer of Afghan origin Abdurrahman Samadan was appointed as the first Turkish representative to Afghanistan, and the Turkish Embassy in Kabul was the first diplomatic mission inaugurated in Kabul.[1]

In 1927, Minister of Foreign Affairs of Afghanistan Mahmut Tarzi came to Ankara and held talks. After this visit, the King of Afghanistan Amanullah Khan came to Ankara and met with Atatürk. During his visit, he said: “I have two eyes: one is Afghanistan, the other is Turkey” and thus expressed the place of the Turkish-Afghan friendship in his heart. It is known that Amanullah Khan have taken the example of Turkey in the modernization process of Afghanistan. In this regard, on May 25, 1928, the “Friendship and Cooperation Treaty between Turkey and Afghanistan” that included the principles of peace, sincerity, and eternal friendship was signed,  it was decided to act jointly if any hostile action took place against either party. With this treaty, the Republic of Turkey declared its commitment to selecting legal, scientific, and military experts to provide the service for the development of Afghanistan's education system and military.[2]

Thus, the development of relations with the Turkish-Afghan cooperation in civil and military fields was carried out, and many doctors and officers from Turkey took part in the modernization process of the institutions in Afghanistan. Teacher officers from Turkey were sent to the Military Officers School that was opened in Kabul.[3] Prof. Dr. Kamil Urga from Turkey laid the foundations of the Kabul Medical School and served Afghanistan for 17 years. Prof. Dr. Mehmet Ali Dağpınar, who was appointed to Kabul in 1936 as legal counsel, took part in the establishment of the Faculty of Political Sciences in Kabul in 1938.[4]  When Atatürk passed away in 1938, Afghanistan officially declared a week of mourning by lowering its flags to half mast.

This cooperation has continued from the establishment of Turkish-Afghan relations until today, and during the period 1932-1960, 212 teachers, physicians, officers, and other experts were sent to Afghanistan.[5] The Turkish Cooperation and Coordination Agency (TİKA) has carried out more than 1300 projects and activities throughout Afghanistan, including primarily the health and education sector, social and cultural activities.[6] More than four thousand Afghan students have completed their education with scholarships from Turkey in Turkish Universities.[7] It is known that there are many high-ranking Afghan states officials and ambassadors who graduated from Turkish universities. This situation has contributed to the consolidation of Turkish-Afghan friendship. For example, Rangin Dadfar Spanta, who served as the Ministry of Foreign Affairs of Afghanistan between 2006-2010, is a graduate of the Faculty of Political Sciences of Ankara University.

On the occasion of the centennial of the establishment of diplomatic relations between Turkey and Afghanistan, Turkish Minister of Foreign Affairs Mevlüt Çavuşoğlu attended via video conference the ceremony held in Kabul hosted under the auspices of the Afghan Minister of Foreign Affairs Hanif Atmar. Minister Çavuşoğlu expressed that spruce saplings were planted in the garden of the Turkish Ministry by him and Ambassador Amir Ramin of Afghanistan, to mark the 100th anniversary of the establishment of diplomatic relations between the two countries, and he said that “As you know, spruce trees are green for four seasons. Just like spruce trees, the friendship between our countries will last forever as well.”

The development of the Turkish-Afghan relations continues with steps of by the Republic of Turkey to reach different parts of Afghanistan. The second Turkish consulate general was opened in Herat in June 2020, and preparations are underway to open a third consulate general in Kandahar this year.