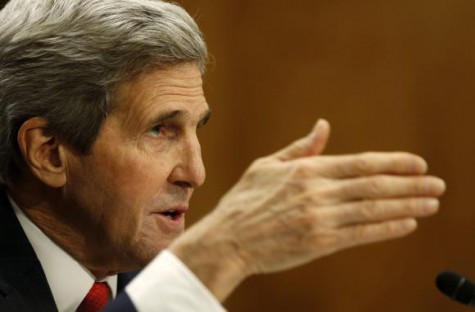 
(Reuters) - Israel described as "unacceptable" on Monday remarks by U.S. Secretary of State John Kerry suggesting cautious openness to negotiating a nuclear deal that would keep Iran six to 12 months away from bomb-making capability.


"In the past, and also recently, what we heard from the Americans, including publicly, and from the Europeans and even from the Russians, was that Iran must be distanced years - not months but years - from nuclear weaponry," said Yuval Steinitz, the Israeli cabinet minister in charge of nuclear affairs.


Iran, which denies seeking nuclear arms, is in talks with Washington and five other world powers on rolling back its work on uranium enrichment and a potentially plutonium-yielding reactor.


Briefing U.S. senators last week, Kerry stopped short of saying negotiators would "settle for" a timeline of six to 12 months in which Iran could amass enough fissile material for a nuclear device but said it would be "significantly more" than the current two months it would take.


"The things that Kerry said ... are worrying. They are surprising. They are not acceptable," Steinitz told Israel Radio.


The Israelis, widely assumed to have the Middle East's sole atomic arsenal, see Tehran's nuclear program as a deadly threat and have long threatened to launch pre-emptive war against Iran if they deem international diplomacy a dead end.


The censure of Kerry's remarks follows a cascade of Israeli criticism of the U.S. statesman's mediation of peace talks with the Palestinians, which are now deadlocked.


"We will not be able to adopt and accept any agreement that keeps Iran within a range of months to a year from nuclear weaponry, because such an agreement would not hold water," Steinitz said, reiterating Israel's demand that its arch-enemy be stripped of nuclear capabilities.


"It would also prompt Iran to get nuclear weaponry, and Sunni Arab countries like Algeria, Egypt, Saudi Arabia, perhaps also Turkey and the UAE, to seek to launch a nuclear arms race."