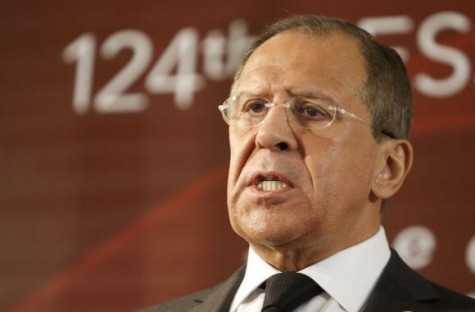 
Russia's foreign minister has questioned the legitimacy of Ukraine's upcoming presidential election amid troop deployment in the east of the country.

Sergey Lavrov said it would be "unusual" to hold a presidential election on May 25 while the army was being deployed against Ukrainians.

"Scheduling elections in times when the army is used against parts of the population is not conventional," he told a news conference on Tuesday at a Council of Europe meeting in Vienna. "This is not Afghanistan."

"We will see how this process ends," he said.


Lavrov said Ukraine should agree a new constitution to define presidential powers before people went to cast their ballots.

Ukraine's foreign minister said if Russia backed the poll, he was ready to support a new round of Geneva peace talks.


Acting Foreign Minister Andriy Deshchytsia said: "If Russia is ready to commit itself to support these elections and to eliminate this threat and eliminate its support for the extremist elements in Ukraine, we are ready to have such a round of meetings."

With presidential elections less than three weeks away, Ukraine and its allies are keen to reduce any threat to the vote, which they see as providing added legitimacy to the government in Kiev.


Meanwhile, Ukraine's interior minister said 30 pro-Russian gunmen were killed on Monday during government operations to drive out anti-government forces from the city of Slovyansk.

Arsen Avakov said on his Facebook page on Tuesday that four government troops also died and another 20 were injured during the fighting.


Gun battles took place at various positions around the city in what has proven the most ambitious government effort to date to quell unrest in the mainly Russian-speaking east.

In Donetsk, a major city about 120km south of Slovyansk, flights from the local airport were suspended on Tuesday.


Ukraine is facing its worst crisis in decades as the polarised nation decides whether to look towards Europe, as its western regions want to do, or improve ties with Russia, which is favoured by the many Russian-speakers in the east.

The crisis has since escalated into a series of open clashes between government forces and rebels that the Ukrainian government says are armed in some cases with large-caliber weapons and mortars.