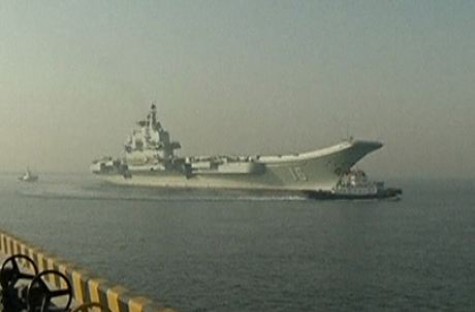 China has demanded the Philippines release a Chinese fishing boat and its crew seized in the disputed South China Sea on Wednesday, the latest flare-up in the oil and gas-rich waters that are claimed wholly or in part by six nations.

Tensions are also brewing in another part of the sea, where China has warned Vietnam not to disturb activities of Chinese companies operating near disputed islands. Earlier, Hanoi condemned the movement of a giant Chinese oil rig into what it said was its territorial waters. (Full Story)


Dozens of patrol boats and other navy and coastguard vessels from both countries are in the area, Vietnamese officials say. Some collisions have taken place, said a navy official, but he did not give details and they appeared to be minor.

"No shots have been fired yet," said the official, who could not be identified because he was not authorized to speak to media. "Vietnam won't fire unless China fires first."


Chief Superintendent Noel Vargas of the Philippine National Police Maritime Group said a maritime police patrol apprehended a Chinese fishing boat around 7 a.m. on Tuesday off Half Moon Shoal in the Spratly Islands on the South China Sea.

The boat has 11 crew and police found about 350 turtles in the vessel, some of which were already dead, a police report said, adding that a Philippine boat with crew was also seized, and found to have 70 turtles on board. Several species of sea turtles are protected under Philippine law.


Maritime police are now towing the boats to Puerto Princesa town on the island of Palawan where appropriate charges will be filed against them, Vargas said.

China, which claims almost the entire South China Sea, rejecting rival claims from Vietnam, the Philippines, Taiwan, Malaysia and Brunei, said the Philippines had to release the boat and the fishermen.


"China's Foreign Ministry and China's ambassador to the Philippines have made representations to the Philippines side, demanding that it provide a rational explanation and immediately release the people and the vessel", ministry spokeswoman Hua Chunying told a daily news briefing.

"We once again warn the Philippines not to take any provocative actions," she said, adding that China had "indisputable sovereignty" over the Spratly Islands.


There are frequent tensions in the South China Sea between China and the other claimant nations, particularly Vietnam and the Philippines, both of which say Beijing has harassed their ships in the waters there.

While there are frequent stand-offs between fishermen and the various claimant states in the South China Sea, the actual detention of Chinese fishermen or the seizure of a boat is rare.

An oil industry official in China said the deployment of the rig owned by China's state-run CNOOC oil company to waters near Vietnam appeared to be a political decision rather than a commercial one.

"This reflected the will of the central government and is also related to the U.S. strategy on Asia," said the official, who spoke on condition of anonymity because of the sensitivity of the issue.

"It is not commercially driven. It is also not like CNOOC has set a big exploration blueprint for the region."


Hua, responding to U.S. criticism of the movement of the oil rig into waters that Vietnam says are its territory, said the issue had nothing to do with the United States, or Vietnam.

"The United States has no right to complain about China's activities within the scope of its own sovereignty," she said.


The incidents come days after U.S. President Barack Obama visited Asia to underline his commitment to allies there, including Japan and the Philippines, both locked in territorial disputes with China.

Obama, promoting a strategic "pivot" toward the Asia-Pacific region, also visited South Korea and Malaysia, but not China.


Half Moon Shoal is within the Philippines' 200-mile exclusive economic zone and near to Second Thomas Shoal, where a small Philippines garrison is based, much to China's displeasure.

A second Philippine source, a senior naval officer, said there were two Chinese boats but the other one escaped.


China's official Xinhua news agency said contact had been lost with 11 fishermen after they were intercepted by "armed men" in waters not far from the Philippines.

They were on board the fishing boat Qiongqionghai 09063, which was intercepted by an unidentified armed vessel at about 10 a.m. (3 a.m. British Time) in waters off Half Moon Shoal, Xinhua said, citing a fishing association in Qionghai on China's southern island province of Hainan.


The shoal is some 100 km (60 miles) from the Philippines' Palawan island.

"Several armed men forced themselves onto the boat and fired four or five shots in the air. They then took control of the boat," Xinhua said, adding that the crew were all Chinese citizens, ranging in age from 19 to 64.