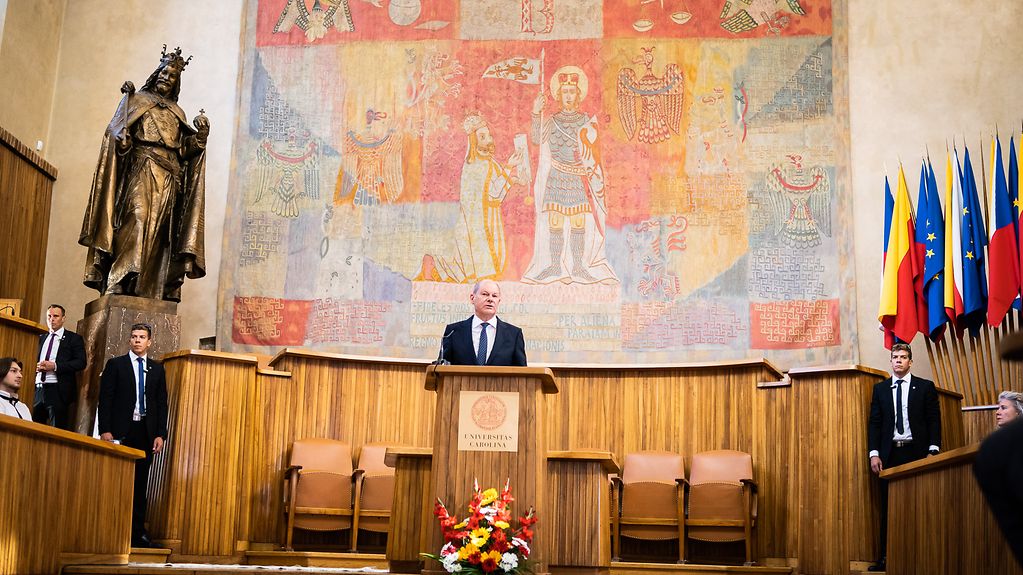 German Chancellor Olaf Scholz gave a speech at Charles University in Prague last week (29 August 2022). During his speech, Scholz touched upon the European air defense system, the European Union’s (EU) enlargement, the importance of Germany shipping arms to Ukraine in the Ukraine-Russia war, and the need for the EU and European Commission to re-evaluate their regulations concerning their decision making.

The most striking part of Chancellor Scholz’s speech was the part concerning the EU’s enlargement. During his speech, Scholz emphasized the need for the EU to expand towards the East. In this part, Scholz stated that six “Western Balkan”[*] countries, together with Ukraine, Moldova, and Georgia, needed to join the Union and reiterated his support for the EU’s enlargement. Three countries are prominent in this case: Ukraine, Moldova, and Georgia. These three countries have not yet taken any steps regarding EU membership. Nonetheless, Scholz has included these three countries into this perspective. In contrast, Turkey, which was granted candidate status at the Helsinki Summit of 10-11 December 1999 and began its full membership negotiations on 3 October 2005, was not included in his speech. This case signifies that Germany, and therefore the EU, certainly does not view Turkey’s possible EU membership in a positive manner. Moreover, Scholz expressed that the mentioned countries belong to the EU’s and Europe’s free, independent, and democratic part.[1] Scholz highlighted that Croatia, Romania, and Bulgaria should join the EU’s non-passport Schengen region.

Chancellor Scholz’s exclusionary attitude towards Turkey during his speech is nothing new. Attempts to isolate Turkey from the Balkans and the lack of statements concerning Turkey’s EU membership have been drawing attention since the term “Western Balkans” began to be used. The “Western Balkans” term was chosen to emphasize that Turkey is not perceived as a Balkan country, thus not considered as a part of the Union. The said term, by itself, is an inaccurate one. Turkey is part of the Balkans and belongs to the Balkan geography. “Western Balkans”, which is another way of expressing the attempts to prevent Turkey’s EU membership, began being used often by the EU officials, especially following Greece’s EU membership (1981) and the accession of Bulgaria and Romania. As AVİM, we have stated in our previous articles that we are of the opinion that the “Western Balkans” term is used to estrange Turkey from Europe, and even the Balkans.[2] After Greece joined the EU in 1981, the rest of the Balkan countries of Slovenia, Croatia, former Yugoslavia, Albania, Romania and Bulgaria constitute the “Western Balkans”; while the remaining part, which is Turkey, is the "Eastern Balkans".

German Chancellor Scholz underlined that the Union’s and Commission’s decision-making mechanism needs to change in order for the EU enlargement to happen. Thus, it was aimed for the accession processes of the candidate countries (besides Turkey) to be expedited.

Approximately one year ago, on 26 September 22021, German Chancellor Olaf Scholz stated that his party is concerned with the path the Turkish government is taking regarding its domestic and foreign policy. In the speech, it was underlined that Turkey needed to abide by the principles of the rule of law. The importance of urgently improving EU-Turkey dialogue was also noted.[3] However, no clear statement was used concerning Turkey’s membership. We now observe that Chancellor Scholz has joined the European political party leaders who made statements last year, prior to their national elections, against Turkey’s EU membership.

How can Turkey be expected to trust and cooperate with the EU in the face of such an approach that is far from being transparent and sincere, an approach in which Turkey is excluded but nevertheless needed? Turkey has made the maximum effort to end the ongoing Ukraine-Russia war and assumed a critical position as a mediator. Considering this war, which Scholz also emphasized in his speech, the most important issue that needs to be questioned is what purpose the exclusion of Turkey by Germany and the EU serves.

[*] AVİM considers the term "Western Balkans" to be a politically motivated separatist terminology and insists on the use of the geographical and historical identification "Balkans" regarding the region.