THE ACCEPTANCE OF IRAN'S MEMBERSHIP TO THE SHANGHAI COOPERATION ORGANIZATION
Commentary No : 2021 / 67
Gülperi GÜNGÖR
28.09.2021
8 min read 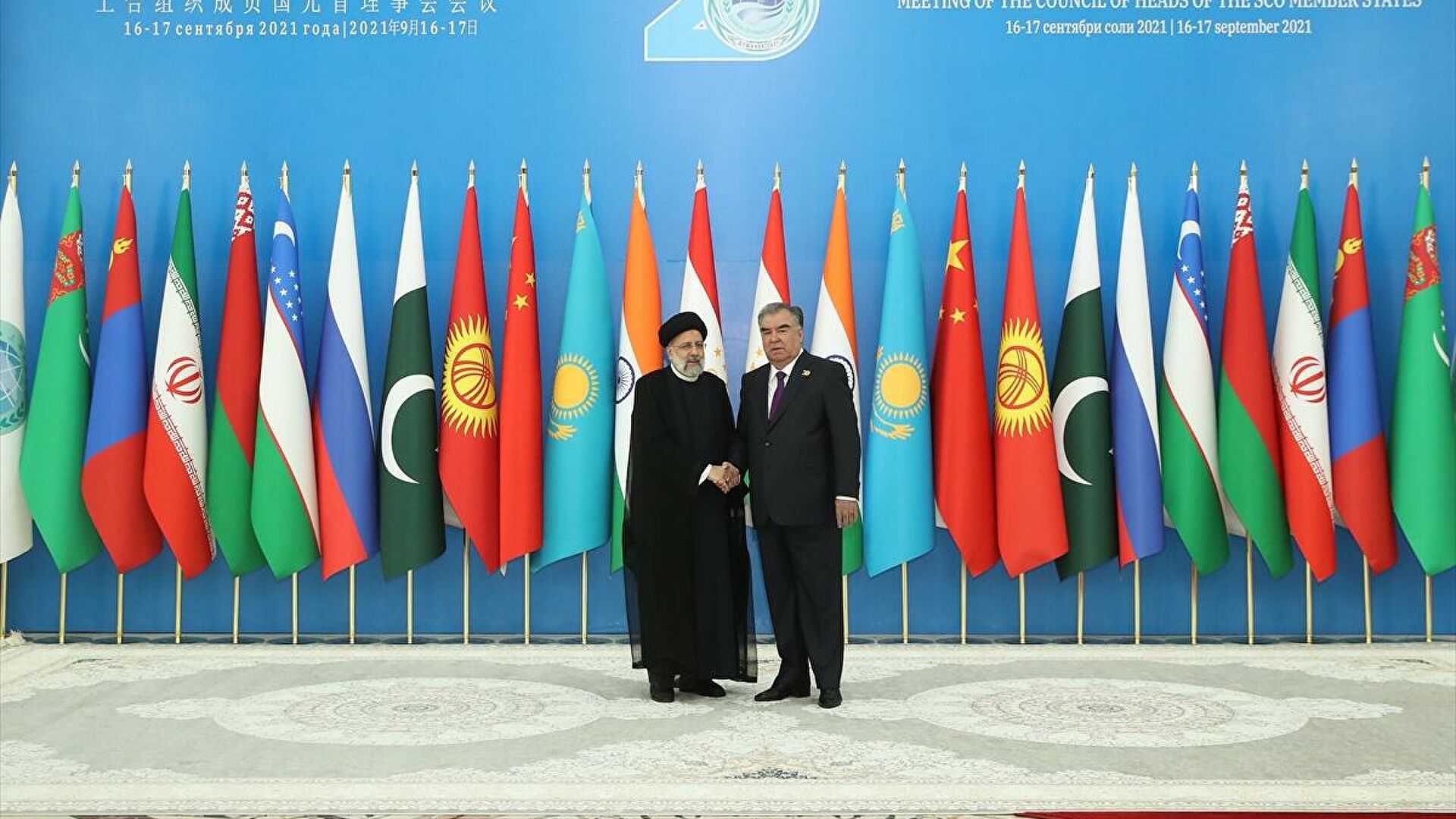 The permanent membership of Iran to the Shanghai Cooperation Organization (SCO) was accepted in principle at the 20th summit of the Council of Heads of State, held in Dushanbe on September 16-17 of this year. According to the envisaged procedure, work on preparing a draft memorandum on Iran's obligations will be launched and Iran will ratify a series of agreements, notably the "SCO Charter" and the "Treaty on Long-term Good Neighborliness, Friendship and Cooperation”. After fulfilling all its obligations, it will be possible for Iran to gain SCO member status. Thus, after the 1979 Islamic Revolution, Iran would be included in a regional organization for the second time after it took part in the establishment of the Organization for Economic Cooperation.

The Shanghai Five, which was established in 1996 with the "Treaty on Deepening Military Trust in Border Regions" signed by China, Kazakhstan, Kyrgyzstan, Russia, and Tajikistan, became an international organization under the name of Shanghai Cooperation Organization in 2001 with the participation of Uzbekistan. India and Pakistan, whose membership processes started in 2015, gained official status as full members of the organization in 2017. Afghanistan, Belarus, Iran, and Mongolia joined the organization as observer states, while Azerbaijan, Armenia, Cambodia, Nepal, Sri Lanka, and Turkey are dialogue partners of the organization. This year, Saudi Arabia, Egypt, and Qatar were also given “dialogue partner” status.

Iran, which joined the Shanghai Cooperation Organization as an observer state in 2005 along with India and Pakistan, has demonstrated its desire for membership in the organization and has made intense efforts since then. The Iranian President of the time, Mahmoud Ahmadinejad, expressed Iran’s desire to act together with the SCO in 2006, seeing the organization as a platform where Iran can find support against the United States, and stated that “the SCO needs to develop into an organization that can actively counter interference in the region by Western powers" and put forward energy trade proposals encouraging cooperation with China and Russia.[1] On the other hand, the SCO had delayed Iran's membership for a long time. In 2007, Iran's Ministry of Foreign Affairs had made an official application for membership to the organization, but this application was rejected by the organization, stating that member admissions would be postponed indefinitely.[2] In the regulation brought in 2010 regarding the admission of new members to the organization, one of the criteria was not to be subject to UN sanctions. With this move, SCO had revealed during that period that it did not want to be directly involved in the conflict over Iran's nuclear program.

The first official statement by the SCO regarding the Iranian nuclear crisis came in 2012. It was stated that “any attempt to resolve the Iranian issue by force is unacceptable”, that the SCO member states support the negotiations between the P5+1 countries and Iran, and it was called to resolve the issue through dialogue.[3] In the following years, the Iranian nuclear crisis was on the agenda of the meetings of the heads of the SCO member states. In the Bishkek declaration in 2013, it was emphasized that “threat of or the use of military force and unilateral sanctions by individual states against [Iran] are unacceptable”, and a call was made for the issue to be handled peacefully based on the principles of gradualism and reciprocity.[4] In the 2014 declaration, with reference to the "Joint Action Plan" prepared by the foreign ministers of Iran and the United Kingdom, China, France, Germany,  Russia, the US, it was expressed that the SCO member states welcomed the constructive negotiations process.[5]

At the 2015 Ufa Summit, the initiation of the official membership process of India and Pakistan was accepted, thus the first step towards enlargement was taken. Until that date, it was observed that UN sanctions had kept Iran out of full membership table. However, as a result of the "Comprehensive Joint Action Plan" signed in 2015, also called the “nuclear deal”, many of the sanctions against Iran by the UN Security Council, the European Union and the US were lifted, and the discussion of the possibility of Iran's participation in the SCO came to the fore. Despite this, Iran's membership efforts could not reach a conclusion, and no clear response was given to Iran's membership requests in 2016 and 2017. Despite Russia's various statements that it supported Iran's participation in the SCO[6], it was thought that the opposition to Iran's membership came primarily from Tajikistan. Although it is Russia and China which have the most influence in the SCO, it is known that the organization takes its decisions by consensus. The invitation of the leader of the Islamic Resurrection Party (IRPT), which Tajikistan accused of a failed coup and banned, to attend the International Islamic Union Conference in Tehran, strained relations between the two countries. The closure of the economic and cultural offices of the Iranian Embassy in the north of Tajikistan was another indicator of the diplomatic tension between the two countries.[7] In this period, although China did not openly take a stance against Iranian membership, comments were made that China was unenthusiastic about Iranian membership. After the escalation in 2018 with the US President Donald Trump's announcement of the US’ withdrawal from the Iran nuclear deal and Iran’s decision to increase uranium enrichment in response to the sabotage of Iran's nuclear facilities, SCO offered a limited response at its summits, declaring that the problem should be resolved through dialogue and that the Joint Action Plan should be implemented.

Considering this background, questions come to mind as to why the door of Iran's membership to the SCO was opened this year. After the sanctions against Iran were lifted within the framework of the Joint Comprehensive Action Plan in 2015, it was seen that many European companies started to operate in Iran in order to take advantage of investment opportunities in the country, and Iranian officials organized trips to European countries for joint investment cooperation.[8] Considering that Iran turned to the West during the time of Hassan Rouhani, it can be thought that China and Russia preferred to support Iran's SCO membership in order to maintain their influence in Iran. In addition, over the years, it has been seen that China has strengthened its political and economic ties with Iran and would like to maintain this position. China is Iran's largest trading partner, and with the "25-Year Cooperation Agreement" signed on 27 March 2021, it envisages that China will invest $400 billion in projects such as the construction of telecommunications, hospitals, and railways in Iran in exchange for Iran's oil. A similar long-term agreement with Russia is on the agenda, while free trade agreement negotiations between the Eurasian Economic Union and Iran started in 2021. In addition, in the new conjuncture of the region formed due to Afghanistan, it has been commented that China and Russia are trying to pull Iran to their side with the SCO membership together with the China-Russia-Iran-Pakistan quadruple initiative. In Dushanbe, which hosted successive SCO and Collective Security Treaty Organization summits this year, it was announced that it was decided to maintain coordination between Russia, China, Pakistan, and Iran.[9]

As mentioned at the beginning, Iran's membership to the SCO will take time and it is expected for process to take at least 2 years. In this process, the date of the negotiations to revive the Joint Comprehensive Plan of Action (nuclear deal) has not yet been determined. It is hoped that Iran's membership process to the SCO will contribute to furthering the dialogue in these negotiations. In addition, Iran's membership constitutes a step against the perception of Iran as destabilizing and threatening the Central Asian states and encourages Iran to maintain a constructive dialogue with the countries of the region. In conclusion, the acceptance of Iran's SCO membership application is an important development that should be taken into consideration for both the organization and the region.

[3] “Declaration of the Heads of State of the Member States of the Shanghai Cooperation Organization on Building a Region of Lasting Peace and Common Prosperity”, June 7, 2012, https://www.fmprc.gov.cn/ce/cese/eng/xwdt/t939149.htm

[4] “Bishkek Declaration By the Heads of the Member States of the Shanghai Cooperation Organization”, September 13, 2013, http://eng.sectsco.org/load/199687/

[5] “Dushanbe Declaration By the Heads of the Member States of the Shanghai Cooperation Organization”, September 12, 2014, http://eng.sectsco.org/load/199902/