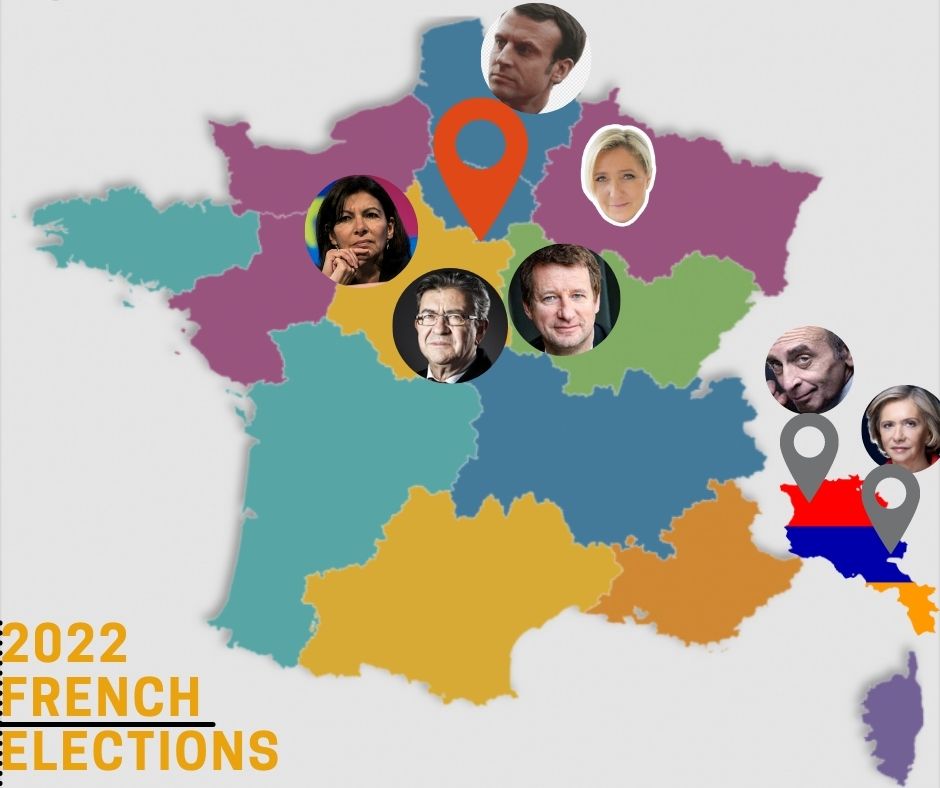 As the Presidential elections in France are approaching, the effects of rising populism in the race are being felt. Candidates in France, just like how it has been for the past couple of years in other European countries, are resorting to populist-nationalist rhetoric. The most remarkable thing in the voting race of candidates are visits to Armenia. Apparently, Armenia is being considered as a polling district for the elections in the next April.

There is no consensus on the number of ethnic Armenian citizens living in France. The numbers stated in different sources is between 250.000 and 750.000. According to the data published in 2016 by the High Commissioner for Diaspora Affairs of Armenia which has a reputation to manipulate numbers, this number is about 650.000.[1] By 2021, it is possible to say that nearly 700.000 Armenian origin individual is living in France. Therefore, presidential candidates of France are making their official visits to Armenia as they desire to get their votes.

In the past, the Karabakh conflict and Turkish-Armenian controversy on 1915 events have been used as propaganda materials to win Armenian voters in the elections in France. The far-right candidate Marine Le Pen, who was one of the candidates in the 2017 elections and also is a candidate in the 2022 elections, expressed her hope for an agreement concerning the unification between Armenia and Karabakh and declared France as the guardian of Christians in the East.[2] Similarly, Francois Fillon who had also served as a Prime Minister of France said that "Karabakh was separated from Armenia by the Soviets, arbitrarily." Among all the candidates during that time, Macron was the relatively prudential one with his approach. Even so, he had given a promise to the Armenian Community to announce a Remembrance Day for the events of 1915. Nevertheless, throughout the years, Macron's behaviour has gradually worsened. As a President of a co-chairing country of the OSCE Minsk Group, he openly declared that France has supported Armenia before and during the Karabakh war.[3] He even advocated the claims that Turkey sent Syrian mercenaries to the Nagorno Karabakh. No concrete evidence was shown against these claims that were made with the influence of populist rhetoric, however, even in a country like France which is considered the heart of critical thinking, the rising influence of populism has been revealed.

As a result of the soaring populism, candidates who desire to get the votes of ethnic Armenian-French citizens in the 2022 elections started to make visits to Armenia by taking practices of past years a step further. As a beginning, Eric Zemmour who is recognized for his far-right and Islamophobic rhetoric went to Armenia on December 11. He made remarks such as “France had failed to protect Armenia against the Muslim threat” and “Armenia is a Christian nation in the middle of an ocean of Muslims”. Nonetheless, this situation was clamored against even in Armenia. A group of Armenian citizens who were protesting at the airport reacted strongly to the situation by saying Zemmour is trying to draw Armenia into the axis of the Muslim-Christian conflict and harming Armenia by using racist rhetoric[4]. Just before Zemmour's visit, even the Armenian Revolutionary Federation- Western Europe Central Committee (ARF), known for its extreme nationalism in the diaspora, had to issue a statement and say that they were against the use of the Armenian community in racist rhetoric.[5] Without any doubt, not being supportive of the opponents of President Macron, who is certainly an ally for the Armenians, played an important role in this reaction. Zemmour completed his trip by meeting with a few deputies of the Armenian Parliament and returned to France.

After this visit of Zemmour, the news of another visit of a Presidential candidate to Armenia has appeared in the press. From the right-wing Republican Party of France, Valerie Pecresse has also made a visit to Armenia on Tuesday, December 21. In comparison with Zemmour, this visit included high-level meetings. Pecresse met with the President of Armenia Armen Sarkissian, Minister of Foreign Affairs Ararat Mirzoyan, Parliament Speaker Alen Simonian and Katholikos Garegin II.[6] In addition to this, Pecresse visited Khankendi of Karabakh, which is an Azerbaijan territory, with her accompanying delegation. The Foreign Ministry of Azerbaijan sent a diplomatic note to the Chargé d'Affaires of France to protest the illegal visit of Pecresse and declared Pecresse as "persona non grata".[7]

This race between the Presidential candidates in French elections makes it clear that Armenia is being used as a tool. However, the Armenian administration and the policy called "The Armenian Cause" which has been followed for years by the Armenian Diaspora are also responsible for this situation. For example, in the 2020 Karabakh War, to get help and support from western countries against Azerbaijan, the conflict has appeared as "Attack on the Armenians, the first Christian community of the history" in the press.[8] In fact, a picture of an Armenian priest wielding an assault rifle during war, posted from Armenia's official Twitter account reinforced the image of this conflict as a religious one.[9] Also, the Armenian Catholicos has repeatedly stated their expectations on the support of the Christian World about the Karabakh matter during his previous visits to the Vatican and his meetings with the Pope. Inevitably, this propaganda made Armenia the center of attraction for Islamophobic and hate-oriented surroundings, as Zemmour represented.

However, Pecresse's high level visits even before being elected as the President shows that Armenia is not fully aware of the fact that such policies only hurt themselves more than anyone. Because Armenia, which wanted to include the OSCE Minsk co-chairs, including France, in the process, in order to pursue a policy of balance against Russia, completely blocked this option by allowing Pecresse to visit Karabakh. Even if Pecresse is elected, it will not be right to expect that a President who has been declared a “persona non grata” by Azerbaijan will make a positive contribution to the process.

If the administration in Armenia keeps insisting on the aforementioned policies, it will harm Armenia as a country more than anything. Also, third-party countries using Armenian policy as a political tool may affect the regional normalization process, which is extremely sensitive as it is, in a negative way.

* This article is translated by Tuğçe Arman, Avim Intern.

[1] “France,” Office of the High Commisioner for Diaspora Affairs of the Republic of Armenia, diaspora.gov.am/en/pages/37/france+&cd=16&hl=tr&ct=clnk&gl=tr.