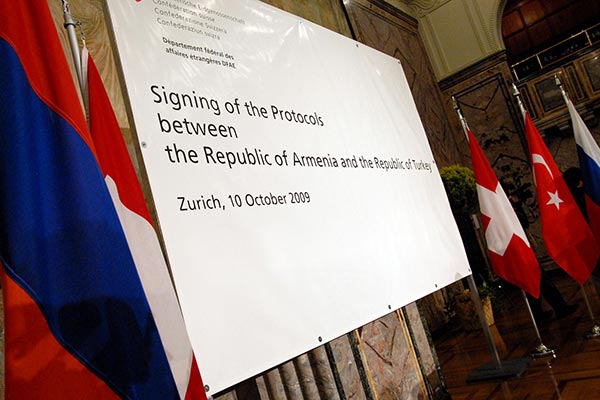 The Zurich Protocols still remain on the agenda of the Armenian diaspora and the press in Armenia even after their cancellation on March 1st. The Protocols, as previously analyzed in detail, has served the diaspora as a major element of pressure on the Armenian government since the very beginning of the entire process.[1] Recently, Harut Sasunnian, one of the spokesmen for the Armenian Diaspora in US, published an interesting review about the protocols at California Courier.[2] Sasunnian’s statements about the protocols, a process which according to him should be a lesson for Armenian government, once again demonstrate the attitude of Armenian diaspora on this issue. Before proceeding to Sassuinian’s article, it might be useful to remember some points that we raised earlier and to emphasize that Sasunnian’s piece confirms these considerations.

As mentioned before, the Protocols were strongly criticized by the diaspora on grounds that they were opening historical facts to debate and that they recognized the borders between two countries. These criticisms were advanced before the signing of the protocols and continued unabated after their signing. As a result Yerevan did not want to attract the anger of the Armenian diaspora. The focus of these critiques grounded on the issue of the establishment of a historical subcommittee. The relevant passages in the Second Protocol, which suggested establishing a subcommittee to determine existing problems and to formulate recommendations for their solutions, including an impartial scientific examination of the historical records and archives constitutes the basis for these critical comments. While this passage was interpreted differently by Turkey and Armenia, the negative attitude of the Armenian diaspora toward the protocols, however, had a negative impact on Armenia’s standing about the protocols. If we remember Sarkissian’s statement made just after the signing of the protocols, then one can see that his statement was fully shaped in accordance with the views of the diaspora. On the other hand, despite the fact that the borders between Turkey and Armenia is recognized by international law and is not an issue for debate, there were some critical comments to the effect that the Armenian government recognized the borders with signing these protocols. A paragraph in first protocol confirmed the mutual recognition of existing border as defined by relevant treaties of international law. Critical remarks concerning the recognition of the borders were voiced out by some of the radical and extreme groups within the diaspora and were not mentioned by the Yerevan administration itself.

One can see that Sasunnian’s views on the Zurich Protocols were shaped by the same concerns prevalent among the diaspora as mentioned above. Sassunnian expresses his discomfort at the recognition of the current Turkish-Armenian border through the protocols and on the establishment of a historical subcommittee between the two countries. He argues that these issues concern all Armenians whether they live in Armenia or the diaspora. [3] According to him, the Armenian government accepted the protocols without Armenian diaspora’s consent. For this reason, Sassunian argues, the protests which Sarkissian encountered during the official trips conducted for the purpose of convincing the diaspora before signing of the protocols were understandable. [4] According to Sassunian, Armenia’s leaders had submitted to the pressure of the major foreign powers and took decisions which were contrary to the Armenian people’s interests. For Sassunnian, however, it was a grave mistake to leave the diaspora’s opinion aside for the sake of the future of Turkish-Armenian relations. He urges that the Armenian government has to learn that before they embark on initiatives that affect the interests of the Armenian people worldwide, they should hold serious consultations to make sure that the majority of Armenians in Armenia and the Diaspora are on board with their decisions.[5] These statements in fact demonstrate the extent of the Armenian diaspora’s influence over Yerevan and serve as a warning for the future. They also reveal that Armenia may face further challenges in the future if it opts for any movement which the diaspora doesn’t approve.

As a long standing opponent of the Zurich process, the diaspora treats the cancellation of the protocols as correcting a grave mistake. The statements of American-Armenian diaspora spokesman Sasunyan once again confirm the opposition of the Armenian diaspora to the protocols. The basic lesson that Sassunian wants the Armenian leaders to learn is the fact that the interests of the diaspora precede the interests of Armenia. Once again, the future course of the bilateral relations between Armenian and Turkey will depend on Armenia’s ability to defend its own interests by distinguishing them from the interests of the third parties.

[1] Tutku Dilaver, “From the Drawers of Ankara to the Dusty Shelves of Armenia: Zurich Protocols”, Avim, 16 March 2018.